Strafe is a fast-paced, ‘90s throwback shooter that has you running and gunning through procedurally generated levels past hordes of deadly foes. Whether you’re nailing opponents with head shots, sniping off limbs, or turning the entire screen into a slaughter with grenades, everything just becomes a big, bloody mess. These piles of gore are sort of a metaphor for Strafe itself – a giant goopy mound of parts that never really work together, though you can tell there might be something neat underneath all the clutter.

Strafe attempts to conjure up nostalgia to provide a shooting experience inspired by the FPS genre’s early greats. It focuses on relentless combat against unending tides of foes, but it feels weak and devoid of impact. The weapons lack weight, the encounters feel more frustrating than challenging, and the repetitive gameplay doesn’t do much to ignite the senses. Unlike the name of the title would imply, strafing is a poor tactic in a world where silent enemies are always coming at you from the sides, making one of the more effective strategies to funnel all the enemies into a tunnel and wipe them out with your secondary-fire abilities en masse.

While there are many factors going against it, Strafe successfully emulates the blood-soaked, ultra-edgy vibe of games long past. Classics like Quake, Wolfenstein, and Doom serve as inspirations, but Strafe’s navel-gazing is mostly reserved to secret areas and winks, like tailored rooms with famous weapons and direct nods to these old shooters. While those little gems are fun, the gameplay leaves much to be desired. Strafe’s commitment to classic shooters is vastly overshadowed by its commitment to being a difficult roguelike. Levels are bolted together in various ways to make every attempt different, but they’re also loaded with frustration and uncertainty. Once you discover the basics of survival, you are largely left at the mercy of chance. I enjoy challenging, masochistic games, but you gain no valuable knowledge from run to run here. You simply hope that you win the battle of random chance multiple times in succession to make your run a bit smoother, like getting health when you need it or an “upgrade” that doesn’t make your weapon worse.

You can go from weak to powerful quickly if you’re lucky enough to find the right perks and weapon upgrades. Or you can die huddled in a corner, out of ammo and clinging to your basic weapon. This sort of variety between attempts isn’t fun or compelling; the time you snag a sweet rocket launcher or unlock a secret room filled with ‘90s gaming throwbacks could be the same time you die to a random elevator crushing you. I haven’t completed Strafe, and I have no desire to. My best efforts have taken me to the end of the second of four large areas, Black Canyon. The game seems tuned to stymie progression, and the few tools you can find to assist with continual progress (like a teleporter) are a challenge to set up. Unlike many roguelikes I’ve known and loved, Strafe never made me say, “One more time, I got this,” after a death. It sparks no desire to push back against the gates for a victory.

Strafe succeeds at being a suitable homage of referential nostalgia-laden trinkets, but there’s no other real reason you should play it. If you want the feel of an old shooter, you should probably go play one of those instead of Strafe.

6
About Game Informer's review system
Concept
Blast your way through a tough, procedurally generated world designed to capture the look and feel of ‘90s shooters
Graphics
Strafe looks bad, but that’s because it deliberately attempts to channel the original Quake, Wolfenstein, and Doom
Sound
The score provides some appropriate tension and blood pumping, but the sounds themselves lack weight
Playability
Easy to pick up and play, but the difficulty combined with roguelike elements make progression the realm of the lucky and the skilled
Entertainment
The deadly dangers combined with randomization make for a frustrating inconsistent mix that’s more about ‘90s nods than entertainment
Replay
Moderate 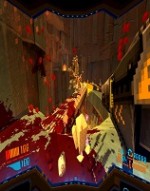