It's one thing for a console RTS to be unwieldy and limited when compared to what's on PC (although this excuse runs thin when you look at Halo Wars), but Stormrise doesn't suffer simply because it's on a console. In trying to introduce a new, supposedly user-friendly unit selection system, developer The Creative Assembly instead destroys almost all of the game's playability.

Players select off- or onscreen units via the right analog stick, which rotates a cone of light that emanates from your current unit and highlights whoever you want to select. Upon selecting that unit, the camera zooms to its perspective. This simple system fails whenever you have multiple units to manage -- which you always do -- due to the fact that the icon you need to highlight becomes lost in a sea of the other unit icons filling the margins of your screen.

Apart from being nigh unusable, Creative Assembly's whip select system hamstrings the player's unit options. Many RTS standards, such as selecting all of your units or units of a specific type, setting rally points for newly created units, and simple AI routines for ally forces, are gone, leaving you with few strategic options. Bum rushing with superior numbers is even a problem given that you can't group and command large numbers of units. This becomes a major hassle given that some levels contain infinitely spawning enemy troops.

If the fundamental flaws aren't enough to make you surrender, even peripheral elements of Stormrise provide no succor. The camera, which eschews the normal top-down RTS view, and its interaction with the environments makes it hard for you to get a good tactical read on the board. The save/checkpoint system uses only one save. Finally, the AI is useless in determining good pathfinding, finding cover, and using its special attacks when ordered. All in all, this game is useless, and the sacrifice its soldiers make in battle is utterly in vain. 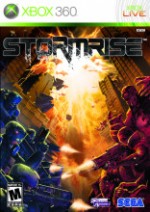 Stormrise
Purchase More Info
4
i
Game Informer's Review System
Concept A console-specific RTS game unfit for human consumption
Graphics The close action camera gives the game a different look, but it also highlights its generally bland visuals
Sound It's hard to blame the voice actors when the dialogue lines are this excruciating
Playability The onscreen radial unit selection system is confusing, limited, and not worth its few benefits
Entertainment Even those who are jaded enough to enjoy watching things crash and burn will want to avert their eyes
Replay Moderately Low