The simplicity of Steep is its biggest advantage – and initially, its biggest deterrent. Letting players loose in a giant playground seemingly has its limitations if you're not intrinsically interested in the four available sports: skiing, snowboarding, paragliding, and wingsuiting. To be honest, I don't have an explicit interest in these sports, so I wondered exactly what the game would have in store for me. But Steep has a charm that transcends that narrow question through its world design, accessible gameplay, and transmission of a certain joie de vivre that itself is a hard concept to create and convey.

Steep's volume of challenges is admirable, as is the scale of its open world, encompassing seven mountains within the European Alps, but it's what the game does with it all that is more impressive. The timed and checkpoint races, trick score-o-ramas, and follow-me events are old hat, but the terrain of the world livens these templates. Jagged crevices that don't look like you could squeeze a quarter between them make you hold your breath as you dive through in your wingsuit. Minefields of snow-covered rocks and moguls launch you in the air and test your timing. These kinds of breathtaking and demanding stretches are not manicured only for preset challenges; wander around freely and you experience plenty of this varied and engaging topography. From here you can create your own events and see those which players you're connected with have come up with themselves.

The navigation tools and options are a vital part of enjoying the world. Players can restart challenges or see the entire world map at any point, and flitting from one thing to the next without loading is part of the fun. Not too long into the game, you can buy helicopter tickets that take you virtually anywhere, and designated drop points not only point you to fun areas but must be found as part of the game's explorer spirit. Also, being able to drop into different points and replay a run makes sure you're diving right into the good stuff. The one tool I wish Steep's world map had is a filter for specific events and locations.

Everything you do in the game contributes to an overall level system broken down into different buckets representing types of experiences like exploration, daredevil-type stuff, tricks, and even biffs. From here you can spend your earned credits on a bunch of customization items like outfits and cosmetic equipment. The system opens up the different mountains, but Steep does a good job of doling out challenges here and there even on mountains that you haven't fully unlocked, so you're not stuck grinding XP at a specific location just to get elsewhere.

The gameplay of the sports themselves fits comfortably within Steep's larger, well-crafted structure. All of them are easy to pick up and play and get to the meat of what they're about. Skiing and snowboarding offer a similar experience (it's up to you which you prefer), the wingsuit conveys its death-defying rush, and the paragliding is peaceful but also requires skill. They aren't without their shortcomings, however. I wish you could run faster on foot, there should be a quick reset feature to keep you from tumbling forever down the mountain when you fall, and it's too easy to get stuck on buildings and in some angular parts of the topography. Beyond that, Steep's trick system is about accessibility. It's not a game of Tony Hawk or Skate-style intricacies, and therefore Steep's tricks don't produce the kind of awe or self-satisfaction when performed.

Without the pure granular gratification of its tricks, Steep's feast resides in its many moments. Enjoying a beautiful vista, surviving a suicidal bombing run down the side of a mountain, or uncovering a new area and being rewarded for it – this is what keeps me coming back. One memorable moment was during a seemingly routine paragliding event following an NPC. I normally find these kinds of challenges relatively boring, but in this case I mastered riding the wind gusts up the side of the mountain through dangerous, craggy spires. Upon landing, I warmly reflected on the subtlety of an experience that not only contained tense gameplay and gorgeous scenery, but which elicited a quality of enjoying-the-moment that isn't easy to achieve.

This kind of exalted occurrence can also be found throughout the game in its daring, life-or-death sequences and even the simplicity of earning co-op XP by easily pairing up with up to three real-life friends or strangers and just exploring the world or doing tricks within proximity of each other. I honestly wasn't expecting to find such a harmony with Steep's wide world, but it's definitely there.

For more on the game, take a look at our Test Chamber with it.

This game was reviewed on the PlayStation 4. It also appears on Xbox One and PC.

8.5
About Game Informer's review system
Concept
Give players a range of mountains to explore seamlessly, and let them find all kinds of structured and unstructured moments
Graphics
Steep contains some stunning scenery – all without loading
Sound
Your character’s random sayings are tiresome, but you can always switch to another preset character. The mountains themselves have monologues, which is interesting
Playability
Pulling off tricks and controlling your avatar is easy enough, but you get caught on the environment, and I wish there was a quick reset option like when you go off the track in a racing game
Entertainment
You won’t have to look hard to find what this game has to offer, from its extreme situations to its more subtle pleasures
Replay
High 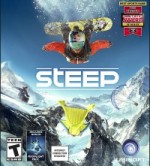