Annoying Bugs Survive An Otherwise Exciting Apocalypse
by Jeff Cork on May 08, 2015 at 09:41 AM You sprint toward home base with a train of zombies in tow. Your run slows to a jog, and then a slow trot as your stamina drains. It’s hopeless. Then the cracking of gunfire breaks through, and your rotten pursuers drop one by one. Crashing through the gates to sanctuary, you gain a new appreciation for the sniper tower you just upgraded.

You’re driving through a congested freeway, dodging abandoned cars and reanimated stragglers. The zombie hordes are wandering too close to your shelter, and it’s time to act. You make a beeline toward the creeps, splattering an entire group to bits with a perfectly timed e-brake turn. Your car coasts into its parking spot, dented and smoking, but things are safe – for now.

You’re searching for ammo when a zombie walks through a wall and bites you to death. This is State of Decay, a game that succeeds in spite of itself.

I enjoyed the original 2013 game in its rough launch form, and I was happy to see it improve with each update and DLC pack. Undead Labs addressed initial concerns with the game’s poorly documented community management, added the ability to store items in a vehicle’s trunk, created a dedicated survival mode, released a new map and campaign, and squashed a variety of annoying bugs. It remained far from flawless, however, and you had to look past a host of technical issues to see the gem at its core.

The Year-One Survival Edition takes everything that’s been released so far and adds a bit of visual polish and other tweaks for Xbox One and PC. It’s an admirable effort, but returning players will notice that plenty of previously existing issues from the game’s past iteration have stumbled through to this new bundle.

Smashing zombie skulls in is fun on its own, but State of Decay is so much more. It’s an intricately designed game with layered systems, where mismanaging your priorities or ignoring a character’s overall state is as much of a death sentence as getting your face chewed off. You spend a significant chunk of time killing zombies with mic stands, wrenches, and other weapons, but it’s with a much larger goal in mind; you’re responsible for keeping a community alive by tracking down resources, scouting for new members, foraging for supplies, and upgrading your base. There’s rarely time to take a breather, and the intensity is ratcheted up with the knowledge that a mistake could lead to your character permanently getting killed.

That core sense of desperation remains the highlight of the Year-One Survival Edition. If you played the first game and bowed out before the DLC came, this is a great excuse to revisit State of Decay. Breakdown strips out the story, challenging you to see how long you can survive with finite resources. Lifeline shows what the outbreak was like from the military’s perspective, giving players the ability to give orders and access artillery strikes and supply drops. They’re both different enough from the first campaign to warrant a playthrough. Then there are those glitches. I don’t mind seeing silly stuff like zombies falling into the world right in front of me, and even the occasional instance of the monsters walking right through a tent. It’s the other ones that hurt. Cars have a tendency to flip over or become irrevocably stuck on insignificant obstacles. That’s bad enough, but the frustration is amplified when a friendly NPC isn’t able to exit the car and stands on top of it like a statue. I’ve been unable to complete missions centered on clearing out an area because a zombie had somehow lodged itself beneath the ground or a similarly inaccessible location. Given the single-slot autosave system, these little problems escalate into big ones. I love the sense of permanence it creates in ordinary circumstances, but not so much when a no-deaths run is ruined because of some ridiculous technical gaffe.

This enhanced version naturally looks better on Xbox One than it did on Xbox 360, but those higher-res textures apparently came at a cost. Undead Labs says it runs at 60 frames per second, but it chugged frequently, and I rarely saw the game running anywhere close to that number. I appreciate the new level of detail; some of the signs in the game are now readable (and pretty funny, too), but I’m not sure that it was worth the tradeoff.

In spite of those very real problems, I’m still quite fond of State of Decay and the Year-One Survival Edition. Although the parts that are great don’t counter its many flaws, when taken as a whole, it’s still worth playing.

7.5
About Game Informer's review system
Concept
Scrape your way through the zombie apocalypse while building a base and community of fellow survivors
Graphics
Enhanced textures and a higher resolution don’t cover other visual issues, including spotty framerates, pop in, and wall-phasing creeps
Sound
Zombie moans and the sounds of rummaging add to the tension. The voice acting runs the gamut from passable to unbearably bad
Playability
Make no mistake, there’s a lot to take in with State of Decay. Once you figure out its various interconnected systems, it all makes sense
Entertainment
You get a lot of game in this remastered bundle, as well as a lot of technical hiccups to look past
Replay
High 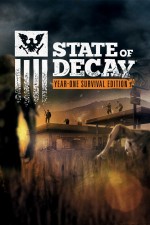