Over the years, collections of minigames have gone from novel idea to poster child for what is wrong with the gaming industry. Sometime around the 100th Mario Party sequel and the countless bargain bin knock-offs, the party game genre became synonymous with derivative, shallow crap. Although Start The Party has enough entertaining aspects that I can’t call it crap, Supermassive Games’ offering won’t change anyone’s opinion of the genre.

Start The Party’s main gimmick is augmented reality, and as far as gimmicks go, it’s a pretty good one. Using the PlayStation Eye to display footage of your living room on your television screen in real time, the game transforms the Move controller in your hand into various digital objects, such as a pick axe or a brush. The effect is impressive, largely due to the responsiveness of the controller. The camera captures your image and the movement of your controller without any discernable lag, and the precision of your movements is accurately translated, no matter how swift or slight the gesture. The only problem is that Start The Party was seemingly designed to make you not enjoy playing it.

Start The Party is almost a parody of the party game genre, which I could almost respect, but it’s still so annoying that it offends my sensibilities as a gamer. Start The Party doesn’t just target the casual crowd –  it targets a casual crowd that has no experience or taste in video games.  The game’s presentation is so exaggerated and obnoxious that you’ll think it was created to test the patience of parents. The game’s sound effects and intolerable announcer make playing Start The Party downright embarrassing for gamers who take their hobby seriously.

Not helping Start The Party’s cause is the fact that the majority of its minigames are shallow experiences, each comprised of less than a minute of gameplay. Many of the offerings reminded of WarioWare’s microgames, and were only slightly more complex. The use of augmented reality in these game’s makes them slightly more enjoyable, but can’t hide how one-dimensional they are for very long. Whether you’re hacking apart rocks or catching vegetables on a pizza pie, most of the minigames in Start the Party aren’t worth your time.

Some of the minigames are genuinely intuitive and enjoyable. One game involves little cartoon characters parachuting down the screen towards moving rafts. As the game starts, the controller in your hand is transformed into a fan, which you must wave at the falling parachuters to blow them towards safety. No matter which way move your arm or contort your wrist to get into position, the game accurately reads your movements. Likewise, the precision and ingenuity of the painting game, which requires you to paint in random shapes within strict time limits, evoked more spirited movement out of me than anything I’ve played on the Wii. I just wish there more of these types of minigames to play.

If Start The Party put half the effort into coming up with some additional creative and entertaining minigames as it does courting the casual crowd with flashy graphics and annoying sound effects, than I could recommend trying out this minigame collection in good conscience. As it stands, the novelty of playing around with augmented reality will quickly wear out under the weight of the game’s shallowness and obnoxious demeanor.

6
About Game Informer's review system
Concept
Make a minigame collection centered on new hardware and augmented reality
Graphics
The graphics and presentation are overly cartoony, but still look good
Sound
Make no mistake, you will want to kill Start The Party’s obnoxious announcer
Playability
The controls are often stupidly simple, but at least they’re responsive
Entertainment
The use of augmented reality is admittedly entertaining, despite the shallowness of the gameplay
Replay
Moderate 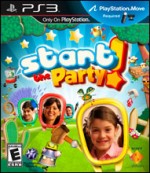