LightBox Interactive’s spiritual successor to Warhawk takes to the cosmos with a novel mix of RTS and third-person shooting. While I appreciate the large player counts and wide-open battlefields, the on-foot gunplay and lack of multiplayer modes are disappointing.

Starhawk features a sci-fi western theme reminiscent of the cult television hit Firefly, minus the charm and memorable characters. The environments are impressively large and open, though your interactions with the world are limited apart from the structures you order down from space. The inanimate parts of the environment look fine, but character animations and other visual details pale in comparison to most modern shooters. Outcasts (the story mode’s enemies and one of the multiplayer factions) are particularly ugly thanks to their constant blue glow, which is caused by rift energy, the main resource you fight over for the duration of the game.

The new single-player campaign has been a major talking point for LightBox, but it accomplishes little beyond introducing players to Starhawk’s fairly complicated gameplay. You play as Emmett Graves, a gun for hire who protects rift mines from invading Outcasts. While the setup is interesting enough, every level is built on a multiplayer map, and your objectives boil down to defending an area from incoming waves of bad guys on land and in space, before moving on to the next location. Rocketing down into battle via a launch pod is always satisfying

Most levels require a healthy mix of on-foot shootouts, land and air-based vehicular combat, and strategy-oriented base building. I was impressed by how easy it is to switch between these gameplay styles; you might gun down a squad of enemies, build a few auto turrets and walls for defense, and then jump into a Starhawk for an impromptu dogfight all in a matter of minutes. While I had fun creating choke points and mowing down rows of mindless foes with auto turrets, some missions drag on far too long (including the final, ridiculously drawn-out boss battle), and I ran into a few frustrating checkpoints. Throw in some cheaply made animated cutscenes, forgettable characters, and dumb AI, and I was happy to move onto multiplayer by the time the credits rolled.

Unfortunately, I have mixed feelings for Starhawk’s multiplayer as well. On one hand, I appreciate the wide-open battlefields, 16v16 match sizes, and strategic elements. However, the emphasis on building structures and vehicular combat makes the ground game the least compelling component, which is a problem for a third-person shooter. Aside from the ever-entertaining spawning mechanic that has you rocketing down to battle in a launch pod (and hopefully pancaking an enemy in the process), being on foot with an assault rifle and pistol feels downright impotent when up against rocket-equipped Starhawks and heavily fortified bases. When your best chance to help your team is to build a wall around your base or place an auto turret, Starhawk’s sense of achievement pales to that of other team-oriented shooters.

For better or worse, the gameplay cycle of multiplayer also heavily favors the team that works together. Successful teams earn more rift energy, which allows them to build more structures. These structures provide more weapons and vehicles, which in turn makes it easier for them to kill more enemies and get more energy. While I played a few matches with late game turnarounds, most matches were heavily one-sided affairs – or stalemates if both teams focused on building up their bases. My biggest surprise and disappointment with multiplayer was the lack of modes: Besides the standard deathmatch and team deathmatch, Starhawk only offers capture-the-flag and the domination-style Zones mode. There’s also a boring (and sometimes broken) 2-player co-op horde mode, which no one would blame you for skipping. CTF and Zones are as fun as they are in any other online shooter, but given Starhawk’s interesting mix of gameplay, I would have enjoyed some more creative scenarios for competitive play. The lack of modes is even more perplexing given Starhawk’s robust online support, which includes character customization, clans, leaderboards, an event/tournament calendar, and plenty of options for setting up your own matches.

I really wanted to like Starhawk, and got some enjoyment out of the open battlefields, RTS elements, and large-scale matches. However, the lackluster single-player campaign is entirely forgettable, and without some more creative modes, the multiplayer’s lopsided (albeit entertaining) action keeps Starhawk grounded on the launch pad.

7.5
About Game Informer's review system
Concept
Mix third-person shooting, vehicular combat, and light RTS elements in a multiplayer-focused action title
Graphics
The environments and vehicles are impressive, but the characters and animation are second-rate
Sound
Underwhelming on all fronts. The voice acting, sound effects, and music all get the job done without doing anything memorable
Playability
While the on-foot controls feel imprecise, jumping from one gameplay style to the next is quick and easy
Entertainment
Starhawk lacks the production values of a top-tier shooter, but contains some interesting ideas and gameplay hooks
Replay
Moderately High 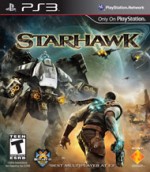