Starbound is a survival/exploration experience that has been in some form of early access for years, but it is finally launching into orbit with an official release. Players begin in deep space, surrounded by unfamiliar planets and with a malfunctioning ship at their disposal. From there, the universe opens up slowly, revealing new activities and items that help ensure your survival and prosperity, drawing you in to a vast universe to discover alone or with friends.

Adventurers blaze trails in the stars, picking up the best weapons and armor, hewing and shooting their way through harsh alien planets and collecting treasure from hidden dungeons. Survivors crawl victoriously from deep digs out to the surface, furtively stuffing rapidly decaying food in their mouths to stave off hunger while hastily wrapping bandages on wounds. Ambitious farmers and builders create vast crop and supply networks fueled by ever-advancing technology and ship upgrades. If you just want to bash some blocks or swing a sword at alien monsters without getting too much into any of the systems at play, you can do that, too. Since Starbound is a pure sandbox with tons of moving pieces, from obscure food recipes to bizarre building bits like bones or flesh stalks, a lot of gameplay comes down to how you like to play, be it building, crafting, hoarding, upgrading, farming, exploring, or dungeon-diving. While you gravitate toward your preferred activities, you must branch into other tasks in some fashion; even if you’re not a builder you still need to cobble together a functional base.

Starbound offers literally quadrillions of planets to explore. The many biomes and worlds are smattered with a rewarding and consistent loop of mini-bosses, dungeons, dangers, and treasure, so you constantly upgrade your gear and technology. This includes dashing and jumping augmentations that make traversal easier, and permanently enhancing your matter manipulator to burn through blocks with greater efficiency. The constant churn of upgrading keeps interest high in a world where digging into planet after planet could risk feeling like a repetitive slog.

The threadbare story offers some structure to the sandbox should you decide to follow it. Story quests take the player to instanced platform challenges and boss battles where the environment can’t be modified, ensuring that the encounters are dealt with fairly, not by building an impenetrable box around yourself – a popular tactic if you run into trouble in other situations. These boss fights are mostly engaging and provide fun encounters (though being shackled to the story for the early part of the game is annoying). While a good blaster by your side is always a big boon, many of the boss fights are more about figuring out mechanics instead of reliance on ultra-powerful weapons. Quests and story don’t add much to the real draw of freeform fun, but they’re nice landmarks for players that need goals as they shoot across the sky. I like taking on Starbound in an action-oriented style, targeting loot-laden chests and focusing on upgrading my weaponry to plow through dungeons and take on harder enemies, amassing pixels (currency) from my conquests to buy food and other goods I don’t feel like harvesting. Some of my friends prefer building up massive bases on worlds that support crops while crafting and teching up instead of taking big risks underground. Starbound, like many games before it, is best experienced with friends on a dedicated server where everyone can split off or play together in groups, eventually coming back home to contribute to a communal pot. Getting into intergalactic chaos with a couple of friends is a lot more fun than taking on a horde of angry bird-people alone. Starbound is a satisfying space sandbox that rarely disappoints, with occasional minor bugs or mandatory missions offering minor quibbles with unbridled, endless exploration. This ambitious indie project has something for everyone buried within its retrograde graphical framework. 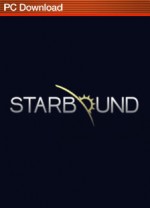 Starbound is a survival/exploration experience that has been in some form of early access for years, but it is finally launching into orbit with an official release.

Purchase More Info
8.5
i
Game Informer's Review System
Concept Build a ship, assemble a crew, craft, and mine while exploring the universe
Graphics The retro style it doesn’t feel out of place or tacked on here. It is a good fit for the huge world
Sound While the sound effects from aliens and ore chunks are nothing special, the excellent soundtrack has soothing, serene, and inspiring tunes
Playability The early hours are the most frustrating as you gain the ability to travel to new worlds from your broken-down husk of a ship, but once things take off, you unlock new options and technology at a brisk pace
Entertainment If you’re a fan of games like Minecraft and Terraria, Starbound is not to be missed. It can keep you enchanted for hours, whether you’re playing solo or on a server with friends
Replay High