In the original Star Wars, Obi-Wan blindfolds Luke and makes him block incoming blaster fire from a training droid. I never knew how Luke felt until I played Star Wars: The Clone Wars and found myself wildly swinging my Wii remote trying to tap into a mysterious unseen force that would let me execute one of the game's evasive combos.

Clone Wars' biggest failure is its broken combo system, which is composed of a string of directional Wii remote swipes. Using motion controls in a fighting game requires thinking outside the box. Instead, Clone Wars attempts a quick and dirty swap of traditional button combos with inaccurate motions. You'd have to be a Jedi Master to play this game flawlessly.

It wouldn't be much of a Star Wars game if you couldn't tap into Force powers. I love the idea of grabbing objects out of the environment and throwing them at my opponent, or knocking them out of the ring with a powerful Force push, but the Force is a difficult beast to tame. This feature should have provided plenty of excellent moments, but it's bogged down by poor targeting and lengthy animations.

The broken core mechanics are especially shameful since the game is so skeletal. The story follows the plot of the recent movie, which means there aren't many characters for Krome to tap for the game, so you end up repeatedly facing off against the same opponents over and over again. While a few character-specific challenges flesh out the single-player experience, they aren't creative enough to be entertaining.

The graphical style of the show works well on the Wii, and the fighters' mid-battle banter adds some flavor to the action. I was even amused by the Lightsaber Clash minigames that occasionally interrupted the bouts, even though these sometimes falter due to poor motion control recognition. While these few gameplay elements help make the experience more digestible, it hardly matters because the basic mechanics are a mess. 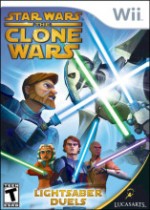 It wouldn't be much of a Star Wars game if you couldn't tap into Force powers.

Purchase More Info
5
i
Game Informer's Review System
Concept Cartoon Network's CG series gets the cheap video game treatment with a 3D fighter
Graphics The show's exaggerated art style works well on the Wii
Sound During battle the characters talk to each other, which adds some depth to the action
Playability Clone Wars' use of motion controls to implement combos is a frustrating experiment I hope no one else attempts
Entertainment Fans of the show might enjoy dinking around with this for a weekend
Replay Low