At Sony' E3 conference, the publisher showed off some major franchises that would be making the transition over to PlayStation VR including Batman, Final Fantasy, and Star Wars. In addition, Sony announced on its blog that Star Wars Battlefront X-Wing VR Mission will be free to every PS4 owner who already has a copy of Star Wars Battlefront on PS4.

This VR experience will put you in the pilot seat of an X-wing, able to experience space fire-fights firsthand. A few seconds of game play was shown on stage, which you can check out below in the announcement trailer.

PlayStation VR also got an official release date and price. It will be available for purchase on October 13 for $399. 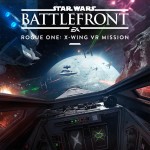