Sirens roar ominously within the mangled remains of a Rebel frigate, warning all to escape. The clanking of hurried footsteps echoes through the halls before being replaced by a series of ghastly screams, loud enough to drown out the alarm. A door slides open to reveal the glow of a red lightsaber backed by the silhouette of Darth Vader. I fire my blaster, and he nonchalantly takes a shot to the chest. He raises his hand and I levitate with it, my throat closing as I inch upward. This spectacle of power is impressive, but as my life fades away, the only thing I can think is “How much did that player spend to unlock the third level of Punishing Grip?”

Star Wars Battlefront II is big, bombastic, and fun. It is also diseased by an insidious microtransaction model that creates an uneven battlefield, favoring those who are willing to spend real money to gain an edge over players who are just here to enjoy the Star Wars experience. Given just how slowly in-game currency is doled out, the notion of keeping up through extensive grinding isn’t realistic. This is especially true of Star Cards, which unlock new abilities, boosts, and upgrades for each class and hero, since they are tucked away in expensive loot crates or eat up rare crafting materials (which you mostly get in crates).

The benefits from the Star Cards range from slight bumps like explosive-damage protection increasing from 15 percent to 17.5 percent, to game-changers like a boost that increases the rate Battle Points are earned by 20 percent. This is a huge deal, as Battle Points allow players to control vehicles and heroes that rack up kills and turn the tide of war. With each death on the battlefield, players see which cards their opponent is using – a design that plants the seed of “I need those cards.”

Even if a player spends a day playing the game to earn credits to buy a couple of crates, they may walk away with unwanted things like emotes or victory poses rather than cards that help their cause. The same currency is also used to unlock heroes like Darth Vader and Luke Skywalker – a frustrating conflict of goods that makes progress feel endless and hopeless. The most damning show of the game basically saying “We want you to pay to win” is a limit being put on the number of credits a player can earn in Arcade mode. After finishing five Arcade challenges, the player is told to come back in 14 hours to earn more. This is the kind of gating that makes certain free-to-play games nearly unplayable, yet here it is in a $60 game. If all of this microtransaction nonsense were stripped away, Battlefront II has all of the makings of a great multiplayer experience. With multiplayer spanning 40 years of the Star Wars saga, I had a blast suiting up as a stormtrooper on Tatooine, piloting an X-Wing in the debris of a Death Star, and marching defiantly into Theed’s palace as Darth Maul. The 40-player Galactic Conquest matches are a bombardment of spectacle and awe, delivering a true Star Wars experience backed by excellent gunplay and photo-realistic imagery.

These battles are brilliantly devised, making most matches feel like the team is functioning as a united front, all while allowing each player to approach the battle with whatever class, vehicle, or hero they want. The maps funnel the action nicely, offering a nice variety in objectives, and chokepoints where glorious chaos ensues. The last Battlefront’s problem of not having enough maps is not an issue here. Battlefront II has plenty, but I’m not a fan of back-to-back matches taking place on the same map, even if you do get to experience it from the other side.

I enjoyed all of the maps almost equally, another testament to the game’s potential for greatness. The tall grass affecting sight lines on Kashyyyk is quite cool, and I also love the how the wars clash against Kamino’s muted colors. The same praise of how the maps can elevate the wars extends to the other avenues of play like Strikes and Heroes vs. Villains.

As enthralling as the gunplay is (and boy do these weapons pack a punch), my favorite part of the game is Starfighter Assault. The excitement of Star Wars dogfighting is captured beautifully here, allowing players to weave dangerously in and out of debris, skim along the surface of star destroyers, and lock-on to a foe to unleash a satisfying torpedo strike. Again, the visualization of these battles is nothing short of breathtaking – Battlefront II is easily one of the best-looking games out there.

The single-player campaign is the one area where the Star Wars fantasy falls flat. The story starts off on a strong note, giving players a taste of what it’s like to be an Imperial officer (I had to train myself not to instinctively shoot the stormtroopers). This dark perspective unfolds through Iden Versio, a skilled pilot who is immediately likeable and different, and appears to be a great guide into the unknown for Star Wars fans.

Just when it seems the story is going to embrace the darkness, it alters course completely and loses its pulse, becoming both predicable and sloppy. Iden’s tale is upended even further by levels that play out as like a greatest hits of Star Wars heroes. Slashing giant bugs as Luke is good fun, but Iden’s tale suffers from it. The highlight of the story is a tease in the final seconds that establishes a legitimate villain (something that is oddly missing up to that point).

The dark side courses through Star Wars Battlefront II, playing mind tricks on gamers to spend more money to become stronger. By the time you read this review, there’s a chance EA may change how the Star Cards or loot crates work, but at this point in time, this predatory microtransaction model Force-chokes Battlefront II’s experience. It’s a shame to see a game with such clear greatness get pulled down to these depths. Star Wars deserves better. We deserve better. 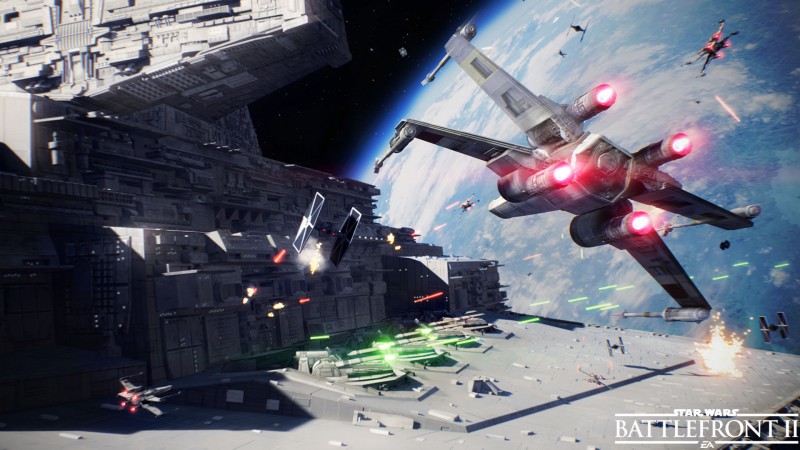 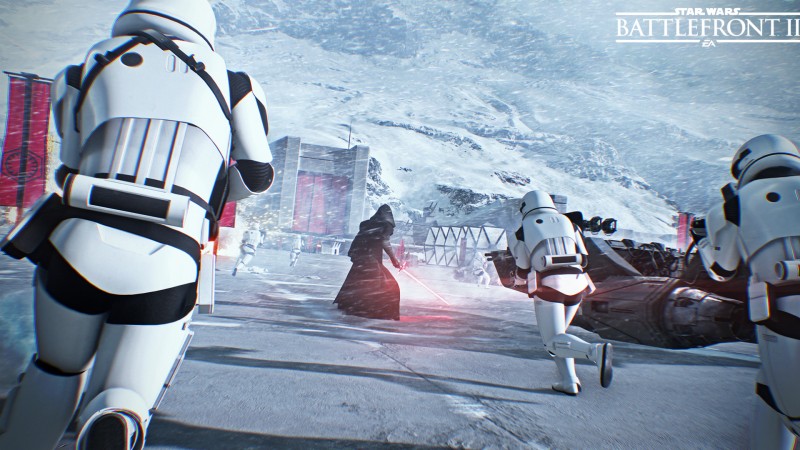 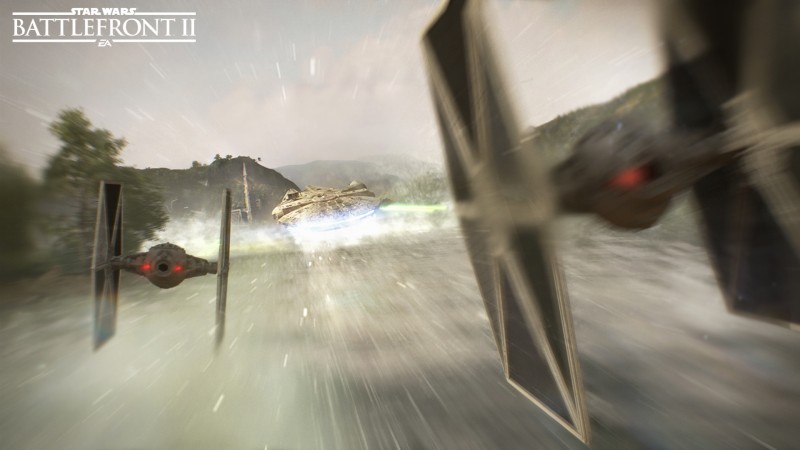 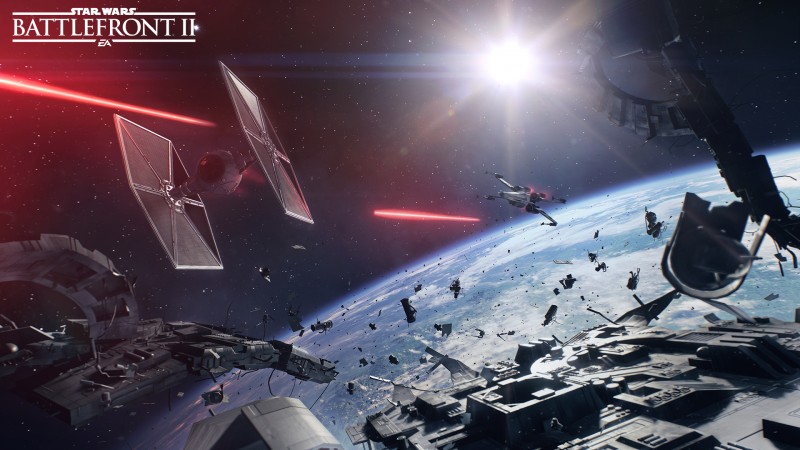 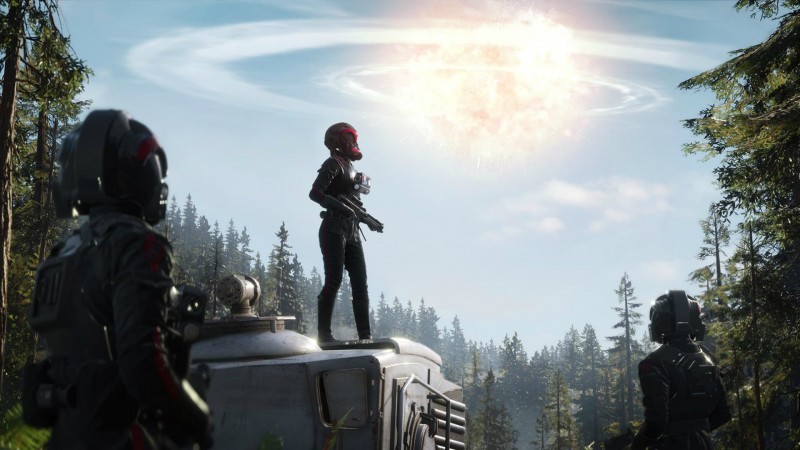 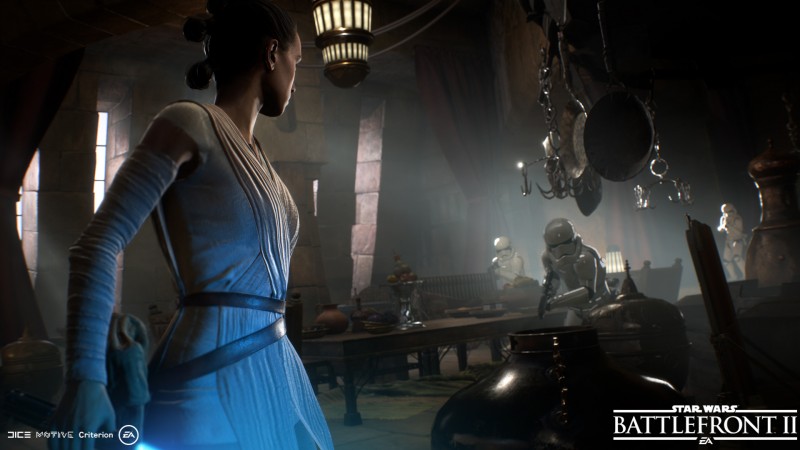 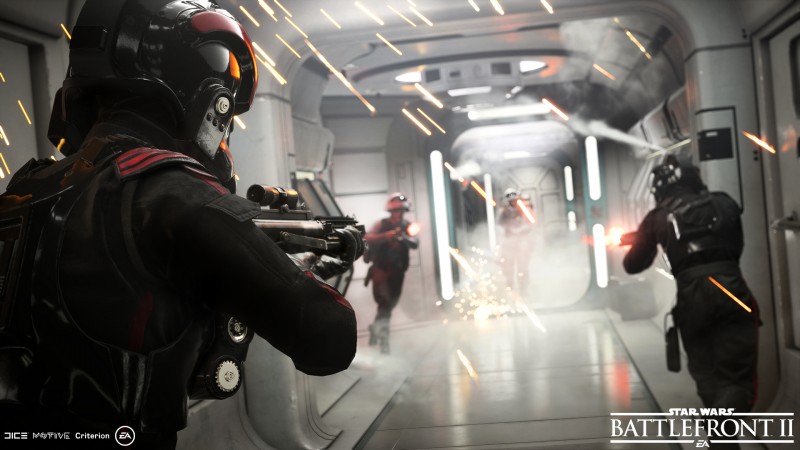 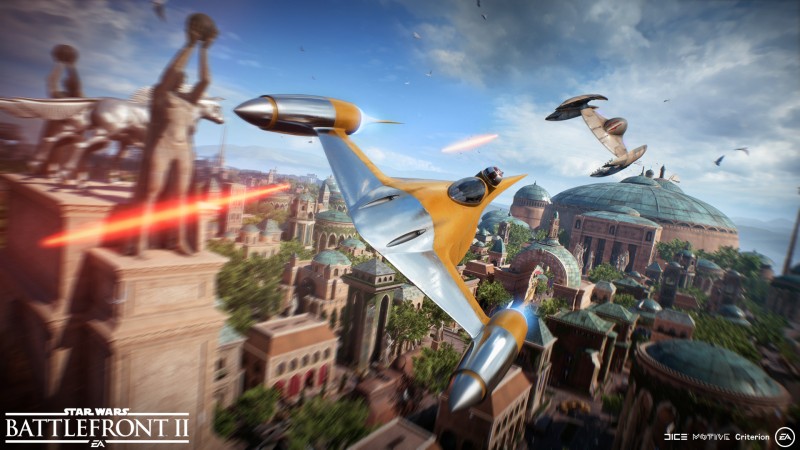 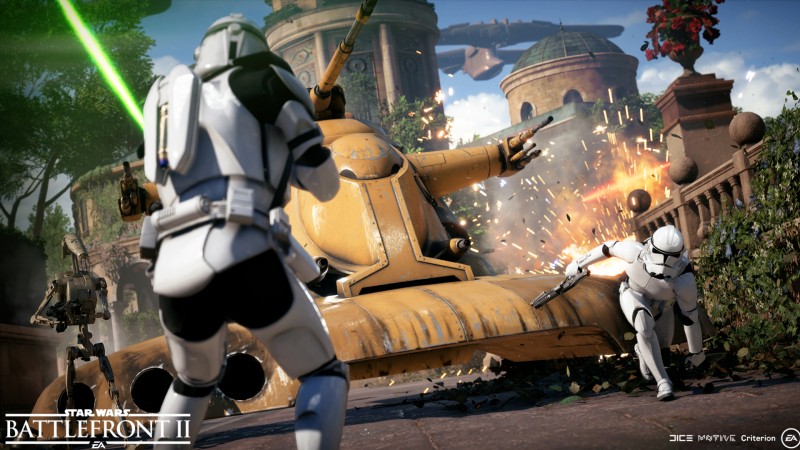 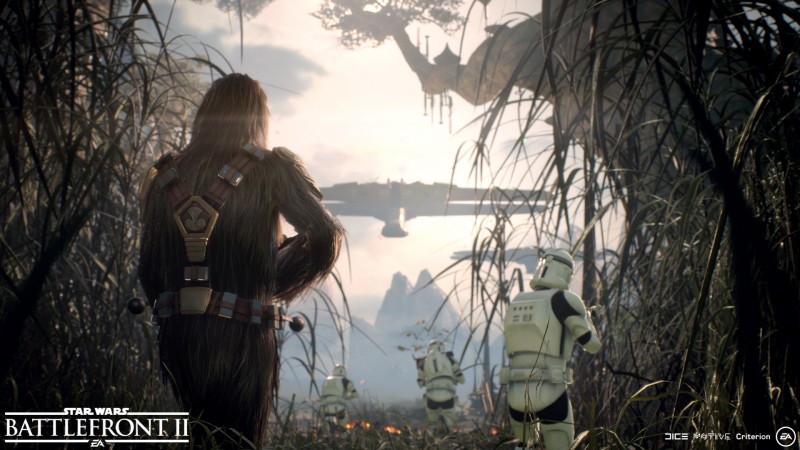 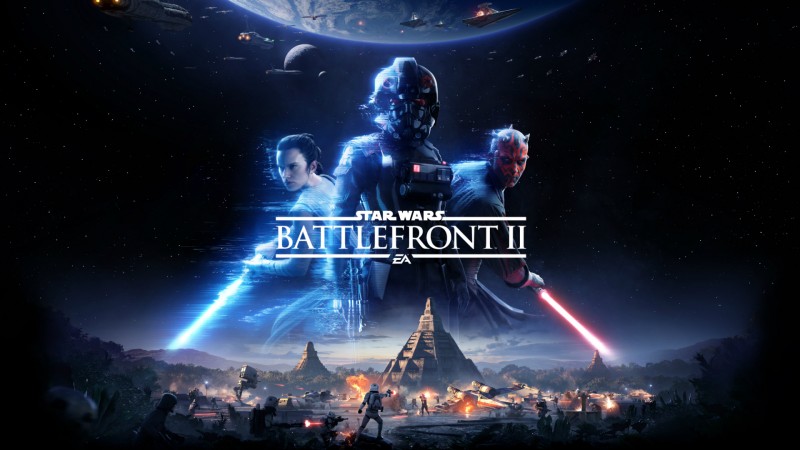 An aggressive microtransaction model hurts what is otherwise a great Star Wars experience.

Purchase More Info
6.5
i
Game Informer's Review System
Concept Answering the call for more content, Star Wars Battlefront II offers a full campaign and more than enough multiplayer material, but the entire experience is brought down by microtransactions
Graphics One of the best-looking games to date, soaring both in the little details and the immense scale of war
Sound Star Wars’ iconic music is once again used to great effect to up the intensity of battle. The voice work is also quite good, especially for Han Solo
Playability The new class-based system works well, empowering players with a variety of satisfying ways to approach the opposition. Space combat is vastly improved
Entertainment A thrilling Star Wars moment can end up feeling gross when you’re reminded of the microtransactions mid-match
Replay High