J.J. Abrams’ 2009 Star Trek reboot took the concepts from the original 1960s television series and made them more palatable for a larger audience. The original series, while full of fun characters and clever storylines, was presented with gaudy sci-fi aesthetics produced on a ‘60s television budget. Digital Extremes’ newest game, based on the J.J. Abrams film series, reminds me more of the original series than the recent films; the game has a few clever mechanics and moments, but its overall lack of polish ensures that it doesn’t stand the test of time.

This game slides into the timeline somewhere between the 2009 film and this year’s Star Trek Into Darkness. After losing their home world, the Vulcan race has settled on a new planet. To aid construction, the Vulcans build a machine called the Helios Device, which collects and harnesses the power from a pair of nearby suns. Unfortunately, the reptilian Gorn race gets their hands on the contraption and begins using it as a doomsday device. The only things standing in the Gorn’s way are Captain James T. Kirk and his logical science officer, Mr. Spock.

The story starts out promising, and is filled with fun little character moments, but quickly devolves into a race for the Helios Device that shuffles players from one firefight to the next. Maybe that wouldn’t be a problem if Star Trek’s third-person cover-based shooting was compelling, but everything – the alien planets, the weaponry, the occasional climbing sections – feels generic. Star Trek doesn’t even have a traditional melee attack; you have to stun an enemy with your phaser before you can perform a close-range takedown.

The action is equally flawed. Digital Extremes has made creative use of the tricorder (the handheld scanning device), allowing you to boost your teammates shields in battle or remotely hack enemy grenades so they explode before thrown, but these clever ideas don’t make up for the loose aiming or the tired enemy AI that walks straight into oncoming fire while shooting from the hip, Terminator-style.

As you travel through alien worlds and derelict space stations, you power up your equipment with credits earned from scanning objects throughout the environment. These upgrades allow you to turn your phaser into an automatic weapon or boost your tricorder so that you can level up your teammate’s shields. Unfortunately, this upgrade system feels thin and fails to encourage experimentation. Your tools only have a limited number of upgrades, so once you’ve purchased your desired loadout, you have nothing left to spend credits on. I maxed out my equipment halfway though the game and ended up with a Scrooge McDuck-sized piggybank by the end.

Star Trek encourages you to be stealthy, but these sequences are so tedious that I often found it easier to just run through with my guns blazing. Thankfully, you don’t have to be a chameleon to sneak past a Gorn; enemies often fail to notice their companions getting stunned in the face by a phaser blast. I watched so many Gorn take nosedives in front of their friends that I have to assume that toppling over is a traditional Gorn greeting.

Big action moments serve as a counterpoint to the stealth. Calling down an airstrike from the Enterprise and chasing a Gorn through the interior of a turbolift are ultimately marred by an overall lack of polish. Background textures flicker, characters fall through the world, and my system crashed completely. These distractions make it impossible to enjoy what should have been the most impressive moments.

Even though I was grateful to have my AI partner complete many of the simple hacking minigames, co-op is still the better way (though not necessarily a good way) to play. Kirk and Spock have different tech upgrades, and occasionally assist each other during combat. At one point, Kirk hurts himself and Spock has to help him hobble to sickbay while Kirk defends them both with his phaser. In another sequence, one player has to clamber across a ravine while the other scans the environment for enemies with their tricorder. Digital Extremes did a good job of coming up with creative ways for two players to assist each other, though you also do plenty of ledge-boosting and door-opening.

Star Trek is ultimately a generic third-person shooter that stumbles in the execution of its few cool moments. Co-op might have saved the experience if Digital Extremes had fixed the bugs, polished the controls, and made the AI repeat basic training – but that’s a lot of work just to bring the game up to baseline standards. The Star Trek franchise is built on the concept of a hopeful future, but fans should keep looking toward the horizon, because this present trek is hopeless.

5.75
About Game Informer's review system
Concept
A shooter built from the ground up for co-op and set in J.J. Abrams’ rebooted Star Trek universe
Graphics
Digital Extremes worked with Paramount to get official movie assets, which helps this game look authentic
Sound
The movie soundtrack is great and most of the actors reprise their roles. Unfortunately, many of them were phoning in their recording sessions
Playability
A by-the-numbers shooter with poor AI and unpolished controls
Entertainment
The action is so buggy that it will be hard for even the most dedicated Star Trek fans to power through this mission
Replay
Moderately Low 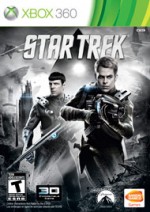