It looks laughably primitive today, but the original Star Fox was revelatory when it first hit the Super Nintendo. Thanks to a specialized on-board graphics chip, the game pushed polygons onto the screen in an era where sprites were king. Star Fox 64 followed up with more sophisticated visuals (including textures!) and a few new additions to Team Star Fox’s hangar, including the Landmaster tank. Star Fox Zero is like a cover version of that sequel, hitting many of the same notes (and featuring familiar ships and locations) as Star Fox 64. Unfortunately, the experience feels dated and lackluster, rather than the exciting return of Fox McCloud that Nintendo was undoubtedly aiming for.

The most noticeable change is the incorporation of motion controls, allowing players to fine-tune their aim a bit more than in previous entries. Before, you piloted Fox’s Arwing ship and other vehicles from a third-person perspective. In Zero, the image on your TV is essentially that view, while the GamePad’s screen pulls you into the cockpit for precision targeting. You have to use motion controls to better aim your crosshairs, which can take some getting used to.

The default setting, where your crosshairs and the GamePad’s motion are always synced, simply doesn’t work well. After playing for a minute or so, the calibration wanders off, so the center position isn’t facing the TV. Resyncing is as easy as pressing a button, but that doesn’t make it feel like any less of a failure. The alternate controls, where motion controls only come into play when you press the fire button fare better, since you are essentially recalibrating every time you enter into combat. Even at their best, the controls are a necessary concession to giving the player better aiming options, rather than a fun way to interact with the game.

Aside from that, it’s the same basic format we’ve seen before. Fox is on a mission to defeat Andross, and his mission takes him from the Earth-like planet of Corneria to far-flung places across the galaxy. Wherever you go, enemies have a tendency to streak into view in groups of three or more units, providing nice targets for Fox and his wingmen. You have rings to collect, bombs to pick up, and moments where you need to help your friends from tailing enemies. It’s a mix of on-rails sections with forced scrolling and free-range sections, where you’re able to move around deceptively small areas at will. Battles generally lack a sense of scale, and few enemies offer anything beyond an easy kill. While there’s a little kick in seeing some of these familiar Star Fox locations again, at a certain point it made me long for a hyperspace jump to someplace fresh. Depending on your mission, you pilot one of several different vehicles. The Arwing is Fox’s staple, and it can transform into a bipedal walker mode. You also have a drone-like Gyrocopter and the Landmaster. The Gyrocopter is the most interesting form, since its hovering ability lets you find a safe spot and act like a mobile gun emplacement. It also lets you deploy a little robotic helper to reach tight spots and hack terminals – including a stealth-oriented level that’s one of the few highlights. The visual differences between vehicles are clear, as is the fact that you’re either able to walk freely or are auto-soaring through the world, but they don’t shake up the game in any major ways for the most part.

Star Fox Zero isn’t ever bad, but it’s generally uninspired. It’s a musty tribute that fails to add much to the series, aside from tweaked controls and incremental vehicle upgrades. I loved Star Fox when it came out, and I’ll even defend Star Fox Adventures (to a reasonable degree). For now, I’ll stick to Super Smash Bros. when I feel like reuniting with Fox.

Star Fox Guard
If you buy Star Fox Zero at launch, you can get a copy of Star Fox Guard as a bonus. This tower defense-style game puts you in charge of security for Slippy’s uncle’s junkyard as robots stomp their way toward a maze’s center. You jump around from camera turret to camera turret, blasting the bots into scrap. It’s not great. It feels like a scrapped minigame from a ­Nintendoland sequel stretched way too thin, and you can safely skip it.
6.75
About Game Informer's review system
Concept
Join Fox McCloud and his mercenary buddies to fight Andross’ forces… again
Graphics
Visuals are simple and colorful
Sound
The soundtrack is a high point, down to the classic low-fi “good luck” that accompanies the start of each mission
Playability
The motion controls add more precision, but they highlight the weaknesses of the GamePad’s tech
Entertainment
Star Fox Zero is like visiting a place you remember fondly, but have outgrown
Replay
Moderate 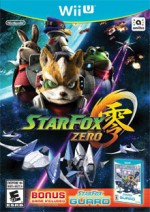