Last year's S.T.A.L.K.E.R.: Shadow of Chernobyl was an unusual title. It pushed the boundaries of what we thought FPS was capable of in some areas: crafting a compelling atmosphere, simulating a post-apocalyptic struggle for survival, and presenting a world that truly reacted to the player's actions. In other ways, it was a perfect example of rough, frustrating design and a startling lack of technical polish; poor performance and punishing tedium marred the experience from beginning to end. Clear Sky, while in many ways a re-release of the first game with a different plotline and new content to explore, evens out the peaks and valleys of its predecessor. The technical and design irritations are decidedly less abrasive, but to its detriment, this world lacks the stunning realism of the original.

Objectively, the changes to S.T.A.L.K.E.R.'s mechanics between iterations are for the better. Armor and weapons can be upgraded and repaired by certain NPCs (in the original, the inevitable degradation of your equipment was irreversible and endlessly annoying), and what you have access to is dependent on what you've done to upgrade that faction's capabilities. Tying the RPG-like progression of equipment to the world in this way is a great way to invest players in their decisions of who to help. The new interface for seeing what's going on between the different factions makes it much easier to make those decisions, as well.

For reasons difficult to quantify, the atmosphere isn't quite as unique or compelling in this release. The story feels more contrived, and lacks the intriguing mystery of the original; since it's a prequel, fans already know the outcome. This title's focus on exploring Strelok's (the first game's protagonist) backstory isn't terribly exciting; the Zone itself is a more interesting character than any person in the fiction. Putting explicit numbers about the factional conflicts at the player's fingertips, as great as it is for power-gaming your next equipment upgrade, degrades the verisimilitude of the simulation. Much of the original's draw was that you didn't have access to anything that your character logically would. Breaking those fourth-wall barriers, though nice from a strict game design standpoint, denigrates the game's greatest strength: conveying the clawing desperation of trying to scrape together an existence in the hellfire-blasted Chernobyl Zone.

It's not that Clear Sky is a bad game. It just doesn't strike the same resonant chord that made the original's many flaws forgivable. 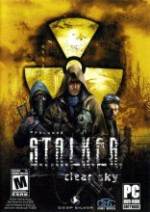 Objectively, the changes to S.T.A.L.K.E.R.'s mechanics between iterations are for the better.

Purchase More Info
7.75
i
Game Informer's Review System
Concept Make some tweaks to the mechanics of last year's ambitious FPS, and tell a new story set prior to that game's events
Graphics The engine runs better on modest hardware this time around, and the atmosphere is still top-notch
Sound Few titles integrate audio into the gameplay this well. Enemies, anomaly detectors, the environment, and Geiger counters all require close attention
Playability Fast travel and equipment repair alleviate a lot of the original's tedium
Entertainment Flawed in some ways and brilliant in others, this fixes some issues while failing to entirely recreate the magic of the first title
Replay Moderate