With releases like Brütal Legend and Costume Quest, Double Fine has cemented its reputation as a go-to developer for unique gaming experiences, even if the company's offerings don't always find an audience. Stacking may be Double Fine's most niche concept to date, but it's hard to imagine a player who wouldn't enjoy the game's clever puzzles and charming story.

You play as Charlie Blackmore, the innermost doll and youngest child of the Blackmore family, a Russian matryoshka set. After his siblings are kidnapped and forced into child labor by the evil Baron, it's up to Charlie to track them down and free them. Luckily, Charlie has the ability to hop inside larger dolls, each of which has a special ability. Some of these abilities are purely for entertainment, but many are vital to progressing through each level.

Despite this novel mechanic, the core gameplay of Stacking is the same as any good adventure game: creatively solving unique and humorous puzzles. Each level contains several challenges Charlie must overcome, which in turn have several unique solutions. Upon completion, a puzzle will instantly reset, allowing you to try it again without having to reload a save. This ingenious mechanic solves one of the most common problems with the genre: searching for an off-the-wall solution that only makes sense to the developer. Instead, virtually everyone will be able to come up with at least one solution (such as using a mechanic to open a traversable ventilation duct) and continue with the story, but dedicated gamers can wrack their brains for more obscure solutions (such as farting into said vent to clear out the adjoining room). An optional time-based hint system reduces the puzzle-based frustration to nearly nonexistent levels. The Baron's evil traps aren't the only problems you have to overcome. Your character is about as responsive as you would expect a wooden doll to be, and his sluggish pace is annoying, especially on levels that require a lot of backtracking. Camera issues emerge in close quarters, and can make targeting dolls next to walls a pain.

The sense of progression also falters; while you unlock the ability to stack with larger dolls as you continue, it doesn't add much to the gameplay. The biggest changeup is the ability to combine characters' powers. This leads to some great puzzles, but this mechanic shows up too late in the game and isn't used enough. A few side objectives such as finding complete doll sets or performing mischievous acts add length to the gameplay, but there's not much payoff for completing them beyond unlocking models at your secret base. Thanks to a little eleventh hour variety, Stacking ends on a high note, but the rest of the game could have used more gameplay twists like those introduced in the final scenes.

Aside from creative puzzles, a good adventure game needs an engaging story, which in Stacking's case is simple, yet charming. Despite only the most primitive of animations (most dolls can only move at their midsection) the characters are memorable, and the Blackmore family is positively endearing. Humor plays an equally important role, and Stacking delivers in this regard as well. Most of the laughs are pretty adolescent, with no shortage of dolls that feature farting as their special ability (with a surprising variety of sounds). If you're too stuffy for this breed of humor, you can expect more sophisticated laughs as well. The Great Depression and child labor are two topics that might not instantly spring to mind when it comes to comedy, but Double Fine uses them to great effect.

Stacking is a bit rough around the edges, but the puzzles are clever, the humor hits the mark more than it misses, and the characters and story are delightful, leaving adventure fans with little more to ask for.

8.5
About Game Informer's review system
Concept
Create an adorable downloadable adventure game with old school puzzles
Graphics
The matryoshka dolls may not pack a lot of polygons, but the hand-drawn art and Victorian-era aesthetic are outstanding
Sound
The old timey soundtrack sells the silent film-style cutscenes, and the sound effects feature a cornucopia of farts
Playability
The controls feel stilted and the camera can cause problems in close quarters, but they don’t spoil the fun
Entertainment
The wide variety of puzzles and their humorous solutions make Stacking a great choice for adventure fans
Replay
Moderate 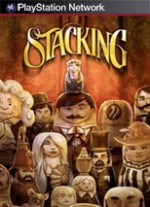