When you hear the words vomit-infused gameplay, do you think, ''hilarious'' or do you turn a little green and say, ''what the deuce? That's disgusting!'' If it's the latter then this isn't the game for you. As a spirited young prince named Ray, you travel a fantasy realm with an angel and a demon over your shoulder who each puke everything from slime to water to ice. Using these different liquid elements, you can stick to walls and uncover hidden paths. Many of the game's puzzles have clever solutions that require you to explore your environment thoroughly. But while the overall concept is imaginative, Spray's action and story aren't nearly so, leaving us with a game that's a little difficult to digest. 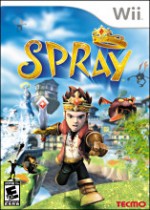 As a spirited young prince named Ray, you travel a fantasy realm with an angel and a demon over your shoulder.