When Sony first debuted the PlayStation Move, many gamers were quick to dismiss it as a simple Wii clone. Sony didn’t help its cause by selecting Sports Champions – a collection of sports-based minigames in the same vein as Wii Sports – as the title to be included in the Move bundle. But after playing Sports Champions extensively, I’m confident that Sony made the right choice: No other title does as good of a job showing off the exciting feats the new peripheral can accomplish.

Sports Champions offers players six games to play: table tennis, disc golf, bocce ball, archery, volley ball, and gladiator. Although none of these events offer a huge amount of depth, they deliver more variety and nuance than most gimmicky motion games have given gamers in recent years. Table tennis, disc golf, and bocce ball all feature control schemes that are so accurate and responsive that playing them feels almost as natural as their real life counterparts, yet all of them benefit from adjustable difficulty levels, and video game elements like flaming skill shots and fantasy courses. These events work so well because the game accurately translates your hand movement in real-time, instead of using exaggerated gestures to simulate movement. I’ve been a skeptic of motion controllers in the past, but the enjoyment I had with these three events convinced me that motion-based gameplay has an important place in the future of our industry, even if only a small one.

The archery and gladiator events are slightly less enjoyable, but they are both improved when using two motion controllers in tandem (though you have to buy the second controller separately). Archery is overly simplistic, requiring the same gesture repeatedly to aim and shoot your arrows. Different courses switch up the gameplay a little, but ultimately you’re still just shooting targets. Gladiator, on the other hand, has the most depth of any of the events – in addition to wielding a shield and melee weapon with your controller, various gestures and button combinations perform additional moves. A slight lag between swinging your controller and your avatar’s follow through is frustrating, and even when my swings hit where I wanted them to, they didn’t feel powerful. Despite the more complex controls, bashing the other player in the head doesn’t involve much strategy, and the gameplay quickly grows monotonous.

Volleyball is the only complete dud of the bunch. The gameplay is more gesture-based than the other events, requiring the player to follow very specific motions. You’ll bump, set, or spike the ball, then repeat ad nauseum. Volleyball is also the least conducive sport to mimic in your living room, and the shallow gameplay made me feel like I was back at the Wii resort.

Despite some missteps, Sports Champions is a solid offering for gamers, provided you can accept the shallow nature of a compilation such as this. Even with head-to-head play, tournaments, challenge modes, and unlockable outfits and equipment, the gameplay never attains much depth. Whether you’ll enjoy the events enough to explore all of the content is up to you, but Sports Champions is a game I will take out from time to time to play with friends or to convince naysayers that there’s more to Move than an attempt to cash in on Nintendo’s success. 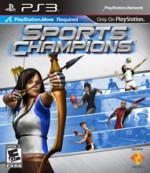 Many gamers are quick to dismiss Move as a simple Wii clone, but Sports Champions does as good of a job showing off the exciting feats the new
peripheral can accomplish.