In Splinter Cell: Conviction, Sam Fisher’s humanity is demolished, leaving nothing but an emotionally frail and agitated shell of a man. He lost his daughter. Everyone he trusted betrayed him. He’s teetering on the edge of madness, and his thirst for revenge is the only thing driving him.

Conviction follows Sam as he wrenches answers from those who have wronged him. His methods are brutal, often making Jack Bauer’s interrogations look like relaxing massages. Heads are smashed through urinals, hands are impaled by knives, and most people who exchange words with Fisher likely won’t talk again.

Artfully constructed flashback sequences bring Sam’s darkest days into full frame, giving the hunt ahead a twisted sense of justification. The plot races forward with the urgency of a Jason Bourne film and skirts most of the clichés associated with revenge stories. Who Sam ends up hunting is a twist I didn’t see coming. This development is an eye-roller, but it gives a concrete and satisfying conclusion to Sam’s story. The last act, and the means with which Sam handles a high-ranking official, are worthy of a fist pump.

With the story transitioning seamlessly from a tale of revenge to one of hope, the gameplay also takes on a new identity. Conviction is not a slow-moving stealth game, nor is it a fast-paced shooter. Ubisoft finds the happy medium. With solid gunplay and intuitive movement at your fingertips, Conviction offers the best of both worlds. I didn’t feel like I was railroaded into using one or the other – I approached combat the way I wanted to.

The game’s sense of urgency spills over into the stealth mechanics. I rarely found myself sitting in one spot waiting for a guard to turn his back to me. The level designs embrace player choice in how you traverse environments as well. Walls can be ascended with the grace of Ezio from Assassin’s Creed, and a sprinting slide maneuver can quickly lower you from an enemy’s line of sight should you need to cover a large distance in a single effort.

Gunplay is highlighted by Sam’s new “mark and execute” ability, which uses cinematic slow motion to frame the brain-bursting shots. When this move is used, Sam quickly chains together a series of silent headshots. I used this ability religiously to make short work of small pockets of enemies, and also to save my ass in shootouts that were heading toward game over screens.

Conviction’s only glaring oddity is the logic that enemies exhibit. They empty clips and toss grenades with the best of gaming’s foes, yet are overly vocal in their pursuit of you. These chatty Cathys yell taunts so frequently that you’re always sure of their location. I don’t know about you, but if I spotted one of the world’s greatest killers I wouldn’t antagonize him. They feel more like Dr. Evil henchmen than believable adversaries.

I also have mixed feelings on Conviction’s stylistic visuals. I love how mission objectives and memory sequences are projected on the game world, but the transitions to black and white – an effect used to tell the player they are hidden from enemy sight – are jarring. I know Ubisoft’s intent was to reduce the reliance on the HUD, but I’d much rather look at a stealth meter than have the game’s gorgeous visuals fade to shades of gray.

Conviction’s single-player campaign is a finely crafted thrill ride that puts Sam front and center. The game’s second campaign (yes, there are two completely different stories) focuses on two characters named Archer and Kestrel. This co-op only experience is heavy on action, pumping out adrenaline-filled “they’re everywhere, man!” sequences almost every step of the way. Coordinating mark and execute maneuvers with a friend to combat the onslaught is a gaming moment I’ll cherish forever. While light on narrative, this campaign is every bit as good as Sam’s. It’s my favorite Splinter Cell co-op endeavor yet.

It may surprise longtime series fans, but Conviction’s multiplayer disappoints outside of the co-op. Ubisoft has included a one-on-one, spy-versus-spy competitive component, but it lacks the flair and depth of previous installments’ spies-versus-mercenaries mode.

Splinter Cell: Conviction isn’t the series’ high point, but it does get the franchise back on track. Fans who have been at Sam’s side since day one should walk away with a sense of closure and optimism for future installments. At the same time, this is a great jumping-on point for newcomers. The fiction includes all the relevant plot points of the series’ past without the Tom Clancy techno-babble that bogged down previous entries.

Off
On
Off
Off
On
Off
Off
On
Off
9
About Game Informer's review system
Concept
An action/stealth hybrid with pitch-perfect pacing and one hell of a story
Graphics
The environments are beautifully rendered, and Sam’s animations are killer. Black and white effects are used too freely, resulting in a detachment from the world
Sound
Sam’s gravelly tones are fueled by emotion, and backed by a surprisingly powerful score
Playability
I never once had to fuss with the controls. The stealth mechanics are easy to embrace, and the gunplay offers razor-sharp precision
Entertainment
A satisfying conclusion to Sam Fisher’s tale coupled with one of gaming’s most rewarding co-op experiences
Replay
Moderately High 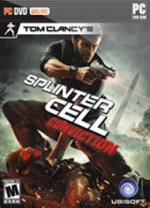