Ubisoft’s Stealth Series Lights The Way For Future Installments
by Ben Reeves on Aug 14, 2013 at 06:00 AM Unforgiving checkpoints and slow placed trial-and-error gameplay kept many older stealth games from appealing to a wider audience. In 2010, Splinter Cell: Conviction broke away from traditional stealth slog with an action-oriented stealth approach that encouraged players to constantly be on the move. Conviction’s mark-and-execute system allowed gamers to easily take down their targets and quickly clean up their messes when they accidentally stepped out of the shadows. Blacklist continues Conviction’s legacy, further refining many of those systems while crafting a white-knuckled espionage thriller that is hard to forget.

After a terrorist group known as The Engineers destroys an Air Force base on the island of Guam, the group demands that the U.S. withdraw all troops stationed inside foreign countries. If America fails to comply, the terrorists will perform a series of weekly attacks on United States interests. Enter Sam Fisher, who is given command of a new special operations and counter-terrorism unit called Fourth Echelon and tasked with hunting down The Engineers to put a stop to their activities. Blacklist might easily be one of the best stories in Splinter Cell history; the game is full of fun summer blockbuster-like plot twists and a few welcome character moments actually make you care about the cast.

The missions have players skipping across the globe, sniping enemies as they parachute into Libya to extract a weapons smuggler, protecting a grounded plane as waves of terrorist zoom up the runway, and breaking into Guantanamo Bay to interrogate a prisoner. Blacklist’s mission objectives are rarely repetitive and never boring. Whenever Blacklist started to get challenging, it was usually because I was failing to utilize Sam’s sneaky skillset. Splinter Cell’s mark-and-execute system is not only useful, but also extremely satisfying. Every time Sam performs a stealth takedown he earns an execute maneuver, which allows him to dispatch tagged enemies with the press of a button. I love the puzzle-like aspect of watching guards’ behaviors, marking several targets, and then dropping down from a pipe to knock out one opponent before hitting the execute button to take out the remaining enemies in the room. My only major complaint is that this system is constrained by Sam’s location; I was able to mark any enemy I saw, but sometime I couldn’t execute a marked target if he was on the other side of a large room – occasionally leaving me behind the iron sights of an active target.

Thankfully, Sam’s wealth of stealth gear helps make up for his nearsightedness. Smoke grenades, sticky shockers, and remote cameras are all useful for manipulating guard behavior and getting Sam out of dangerous situations, but my favorite new tool is the tri-rotor. It’s a miniature aerial drone, which allows you to get a birds eye view of a combat zone, mark targets, and shock enemies from three rooms away. I also loved the steady progression of new gear. After each mission, Sam gets a fresh infusion of cash from the U.S. government, which can be used to upgrade all his equipment. For example, Sam’s traditional night vision goggles can be equipped with a sonar mode that allows him to watch enemies through walls and even track their footprints.

When you get tired of Sam’s solo stealth, you can dive into the wealth of Blacklist’s multiplayer missions. An abundance of optional co-op missions task you and a buddy (either online on through split-screen) with defending your position from waves of enemies, sneaking through terrorist encampments unseen, or trying to take down every hostile in an area without alerting their reinforcements.

Splinter Cell faithful will be most excited to see the return of the series’ much-loved Spies vs. Mercs multiplayer mode. In this classic game type, a team of mercenaries must stop a group of spies from hacking a series of terminals. Mercs use traditional FPS gameplay while the spies have access to Fisher’s arsenal of tricks that allow them to stick to the shadows and avoid open combat. Spies vs. Mercs has always been a refreshing break from traditional death match, and it remains so. Online matches are tense and bloody, and victory often requires careful coordination.

Splinter Cell: Blacklist is a beefy game, and its well worth your time to explore all it offers. While a lot of stealth titles reward you for memorizing enemy patrols and choosing your movement carefully, Splinter Cell gives you the flexibly to be the kind of think-on-his-feet spy that Jason Bourne would idolize.

9
About Game Informer's review system
Concept
Continue to refine the mark-and-execute system while reintroducing the series popular Spies vs. Merc multiplayer mode
Graphics
Blacklist continues the series’ tradition of cutting-edge visuals by being one of the best-looking games on this generation of consoles
Sound
Michael Ironside no longer voices Sam Fisher, but the new actor does a solid job with the character
Playability
Navigating a dark room while taking down half a dozen guards is easy to execute, and Ubisoft gives players a lot of ways to sneak through an environment
Entertainment
Aside from a few trial-and-error moments, Blacklist is a nitro-fueled rush full of epic spy moments
Replay
High 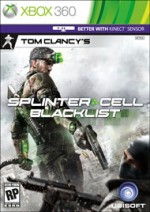