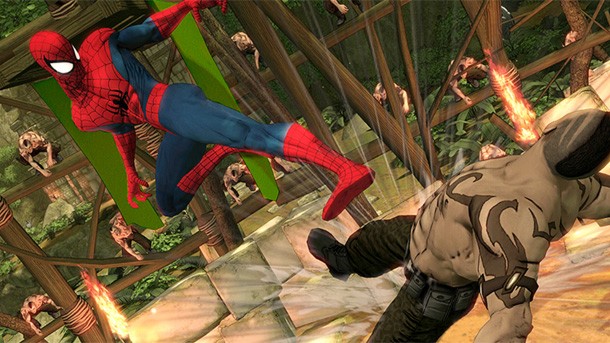 Many different versions of Spider-Man exist these days. Marvel’s wall-crawler has been re-envisioned as everything from a 17th century Scottish rogue to a radioactive pig. In the past, I’ve had little reason to pay attention to these Spider-Man variants. However, developer Beenox makes a strong argument for some of Spidey’s time displaced alternates in Spider-Man: Shattered Dimensions. Leading me to wonder why games have focused on only one version of Spider-Man for so long.

Creating a game with four different main characters, four different worlds, four different art styles, and four different game types sounds overly ambitious, but any smart developer knows that it needs to change things up to keep the action fresh. Shattered Dimensions works that need for variety into its fiction. One level had me running through a jungle using Spider-Man’s spider sense to dodge sniper fire. In the next I was falling past mile-high skyscrapers, dodging hover cars in a future version of New York. Next I was web-zipping between crates as they twirled through the eye of a giant sand tornado. Then a series of spotlights hunted me across the skyline as I quietly knocked out a mob of thugs. The action in Shattered Dimensions is almost schizophrenic, but it’s never boring. Usually in a game like this, half the action ends up feeling unpolished, but Beenox avoids that pitfall while making all of Shattered Dimensions’ disparate game types flow seamlessly together.

With this much going on it’s almost hard to pick a favorite world. Amazing’s gorgeous environments reminded me of Borderlands’ comic book vistas, and its web-based combat felt different than any of the other worlds. I also loved 2099’s neon-tipped environments and free-falling combat, which had me slamming super villains into any object that got in the way of gravity. The Ultimate universe puts Spidey in the black suit and gives him a rage meter, which makes the action against hordes of smaller minions all the more fierce. But I may have had the most fun in the Noir universe, where its stealth-based levels allowed me to sneak through cracks in the shadows and whittle away the enemy numbers with a series of punishing takedowns. The variety in this game extends to the unique boss battles, which usually involve using the environment to creatively take down your opponent instead of just chipping away at a large health bar.

One of my favorite aspects of the game is the Web of Destiny challenge. A cross between traditional orb collection and achievement rewards, the Web of Destiny allows you to level up each version of Spider-Man with new moves, abilities, and costumes. I constantly found myself diving into the menu to see what kind of meta challenges I had left to complete. These various activities include collecting hidden icons, completing time challenges, and defeating enemies in special ways. Many of them can be completed during the game’s natural progression, but only the dedicated will complete all 180 tasks.

Every superhero has his Achilles’ heel, and this Spider-Man is no different. While the combat is fast and fun, the auto-targeting occasionally snaps to the wrong place, and the camera can have a mind of its own when you’re climbing walls. My biggest disappointment is reserved for the story. Comics are a strong storytelling medium, but few – if any – comic-based games have done their source material justice. Activision got current Amazing Spider-Man scribe Dan Slott to help with the plot, but all Slott has done is draft up a bunch of puns so terrible you’ll want to curse. The story details what happens when a mystical tablet shatters across several different dimensions, amplifying the powers of any supervillain who holds it. It’s the kind of hackneyed plot that was fashionable in the ‘60s, and I thought the comic world already transcended this kind of storytelling. 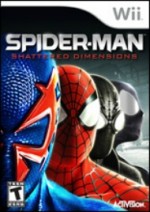 Purchase More Info
8.5
i
Game Informer's Review System
Concept Take four different versions of Spider-Man, set them in four different worlds with four different styles of play, and produce one of the best Spider-Man titles in years
Graphics Each world has its own unique look and style, and they are all great. Amazing’s sketchy comic vibe is particularly stunning
Sound An incredible voice cast featuring actors from past Spider-Man television shows is backed by a solid soundtrack
Playability All four versions of Spider-Man have unique combos to explore. It was nice not just jamming on the same attack button over and over again
Entertainment Don’t worry if you’ve never heard of Noir or 2099, each world offers something to fans of every level
Replay Moderately High