Spider-Man: Edge of Time's story plays out like a Stephen Hawking book – if Stephen Hawking was a comic book-addicted third grader. The terms "quantum causality," "Einstein-Rosen Bridge," "temporal paradox," "wormhole," and "timestorm" are thrown around at will with little regard for scientific fact, and are mostly used as explanations for incomprehensible plot points.

This tale starts out with an easily graspable hook. In the year 2099, an evil scientist named Walker Sloan figures out a way to alter history. Through his tinkering, he's turned his company Alchemax into a totalitarian powerhouse. The Spider-Man of this day, Miguel O'Hara, knows that this isn't the way that history originally played out. To save the future, he must revert the past to its original form. Now here's where things get a little weird. In this altered past, Peter Parker works for Alchemax (as opposed to the Daily Bugle). He's forced to submit his DNA to the company for...you know...reasons. In 2099, Miguel uses this DNA to create a chronal device that allows him to communicate directly with Peter. Think of it as a time phone...that runs on DNA strands...and can apparently only be used after Peter submits his DNA – rather than a day or a few years before bad things start happening. Working together across time, the Spider-Men must reverse the polarity of the chronal energy to right the events of the past and future. Chronal energy polarity, eh? This is starting to stink of a Q plot on Star Trek: The Next Generation. SPOILER: From what I could gather, this polarity shift was accomplished by throwing Doctor Octopus' mechanical tentacles into a wormhole. Science?

Getting to this point requires time altering events. For instance, if Miguel runs into a dead end, Peter can alter the past (usually by punching bad guys or breaking devices) to open up a new path in the future. The way that this is telegraphed to the player is quite cool. While playing as Peter, a picture-in-picture view of Miguel appears in the lower right-hand corner of the screen. Once Peter succeeds in his mission, Miguel's screen expands to full-frame and control is seamlessly handed off to him. This system removes the boundaries of running through bookended levels and makes the game seem like one gigantic story-driven adventure.

No matter how much Peter changes in the past, he cannot help Miguel open locked doors. Given how frequently they are used, Activision should reprint this game's packaging with the bullet point: "Dozens of locked doors and keys to find!" Most of the missions feature a locked door or two or three. Some doors even require three keys to open them. The video game cliché of everything happening in sets of three is abused to the point of absurdity. In one frustrating boss fight, Spidey must gather his foe's DNA three times to complete a strand. Science?

Edge of Time's combat mechanic is similar in design to Beenox's previous Spider-Man title, Shattered Dimensions', but is made hard to follow through the infusion of time-based powers. Miguel can phase through time, leaving an imprint of himself that enemies attack. Peter can speed up his movements to cover ground at a pace similar to Quicksilver's. When these powers are used frequently, which is a smart tactic, keeping track of Spidey's location is kind of like playing "Where's Waldo," especially given how many visual effects are tied to most frays. I mashed the attack buttons, used the phasing/speed powers whenever I could, and was able to rack up 100- and 200-hit combos frequently. Truth be told, having an unfair advantage over combat is kind of empowering, but when the end result is almost always getting a key so you can move on to the next combat area, there isn't much satisfaction tied to it. A fairly large list of combat upgrades is offered to individualize player styles, but none of them really seemed to give me a benefit over the phasing and speed.

The one Spider-Man trait that is rarely touched on is Spider-Man's web swinging ability. Since this entire game takes place inside of Alchemax's facility (both in the present and future), most of the environments are enclosed spaces that make combat intimate and web swinging an afterthought. Yes, the Spider-Men can still swing through these areas, but it's mostly only useful to shift quickly from one end of the room to the other. Only a few areas in this game allow the player to gracefully swing over large expanses and the gameplay tied to these moments is fairly unremarkable.

All of this culminates in an experience that doesn't necessarily feel like it was tailored for Spider-Man. I applaud Beenox for trying something different with this iconic character, yet ultimately find myself thinking about how many locked doors I opened rather than the story, combat, or character-based moments. For me, the game just seemed to get worse as it went on and more frustrating as the same types of mission objectives were recycled. Shattered Dimensions was good fun (a game I would have given an 8 to if I had the chance to review it). Edge of Time is a major step back from the formula that worked. 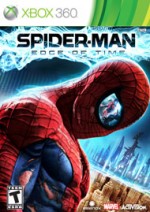 Purchase More Info
6.5
i
Game Informer's Review System
Concept Two Spider-Men. Two time periods. More annoying locked doors than you can shake a web at
Graphics Time manipulation brings an array of beautiful effects and visuals that are difficult to follow. Character models look fantastic, but almost every area in the Alchemax complex looks the same
Sound If you want to hear two Spider-Men bicker and whine about everything for seven to eight hours, this is your game! On the other hand, the soundtrack is awesome and reminiscent of Star Wars
Playability The time-based powers make combat way too easy and remove the need to experiment with different combos and moves
Entertainment The story is a confusing journey through two time periods and little joy comes from opening so many damn doors
Replay Moderately Low