For years, full-fledged online shooter modes were confined to big budget franchises like Call of Duty, Battlefield, and Halo. More recently, we’ve seen the release of downloadable offerings in the genre. Gotham City Impostors, Counter-Strike: Global Offensive, Section 8: Prejudice, and more have entered the XBLA and PSN fray to offer deathmatches at a reduced price. Zombie Studios’ Special Forces: Team X is the latest to release, and it fails to forge its own identity.

If you’ve played a shooter in the last few years, the list of modes in this multiplayer-only title won’t come as a surprise. You’ve got your team deathmatch, king of the hill, juggernaut, domination, and capture the flag standbys, along with a similarly by-the-books progression system. As you kill dudes, capture control points, and complete challenges, you’re able to customize your character with new weapons, attack dogs in the place of grenades, and even unlock the super-sweet ability to turn your hat backwards. If you feel like whipping out the old Hulk Hogan “hand to ear” gesture, you’re free to do so once you hit level 5.

When it comes to the boots-on-the-ground action, there’s only one thing that separates Special Forces: Team X from any other online shooter. Before each round, players get to vote on more than just the predetermined map; they get to vote on three different components to a modular stage. With three different slots that can house various stage elements, there are tons of possible combinations. It’s a cool idea, but one that would be better off in a more competent and original shooter.

Special Forces: Team X may be uninspired, but most of the action performs without much issue. Aiming feels decent, spawns aren’t broken, and the nearly endless map variety leads to a mostly enjoyable experience when it’s working. Unfortunately, a lack of polish rears its head in the form of connection errors, stat/XP resets, spelling mistakes, and a cover system that feels far too sticky.

If there’s one area of the game that’s just downright awful, it’s the art style. Characters look like they were modeled to be realistic military operatives, but then a last-second attempt at a cartoony Borderlands-esque style was made. The end result is a bunch of character models that look terrible no matter how many customizable items you unlock for them.

It isn’t a broken game, but Special Forces: Team X doesn’t really offer anything that can’t be found in better form elsewhere. Shuffling maps around is a cool idea, but it doesn’t matter much if the gameplay is average at best. If you’re looking for a unique downloadable shooter, go for Gotham City Impostors. If you’re looking for cheap multiplayer, buy an older Call of Duty or Gears game. As is, there’s really no reason for Special Forces: Team X to be a must-have for any shooter fan. 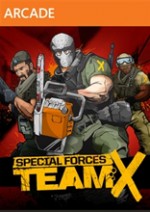 It isn’t a broken game, but Special Forces: Team X doesn’t offer anything that can’t be found in better form elsewhere.

Purchase More Info
6
i
Game Informer's Review System
Concept Bring another multiplayer-only shooter to XBLA
Graphics Just gross. Some of the ugliest character models on the system
Sound Tons of repeating lines, and menu music that sounds like someone farting into a fan
Playability It isn’t great, but most of the actual gameplay works fine
Entertainment Look elsewhere for your shooter kicks
Replay Moderately Low