Over the course of the last 20-plus years, I’ve blasted though countless waves of gun-toting virtual humans with nary a thought of the Geneva Conventions. Nine times out of ten these encounters begin with the enemies shooting at me, so I have no philosophical qualms about shooting back. Sometimes an innocent civilian catches a stray bullet, but most shooters don’t make you think about the ramifications of your actions. Spec Ops: The Line does.

Spec Ops begins with the opulent city of Dubai in shambles. After a series of deadly sandstorms hit the luxurious desert oasis, the 33rd U.S. battalion was sent in to help with the evacuation. They never came back. Roughly six months after they were ordered to lead a caravan of survivors out of the city, the military receives a strange audio transmission from the acting commander, Colonel John Konrad. To find out what went wrong, the military sends in a cocky three-person Delta team led by Captain Walker, a Konrad protégé.

Allusions to Joseph Conrad’s Heart of Darkness and its spiritual cousin Apocalypse Now are evident throughout the narrative. Some work at creating the chilling mood, like Konrad’s warped philosophical ramblings. Others fall flat, like the out-of-place Vietnam War-era music blasting from radio towers in a time where most soldiers would probably be listening to hip-hop and metal. Like the two works of art it pays homage to, Spec Ops chronicles the protagonist’s struggle with psychosis as he tries to understand why Konrad has ceased communication with the military, declared a permanent state of martial law, and kept his battalion in an unsustainable, hostile environment.

The mission quickly goes from recon to rescue when your Delta squad finds some butchered American troops on an abandoned road. But when you first encounter your fellow Joes, it’s not the reunion you expect. As you navigate the derelict hotels, malls, and high-rise apartments, you’re forced to take arms against groups whom armies normally protect, like the stranded refugee population and the U.S. soldiers you were sent in to find. As you explore the decimated city, audio recordings fill you in on how this city spiraled into hysteria.

This compelling set-up fuels the single-player campaign and ultimately forces you to make tough decisions about the excessive use of violence, who to trust, and how you remain sane in an insane situation. Some of the scenarios offer the hollow, binary “morality choice” posed by many games, but other actions you take have stunning unforeseen consequences that impart a real sense of guilt. Eventually the gauntlet of disturbing situations the squad encounters erodes their valorous determination and their camaraderie begins to shatter.

While the story remains riveting up to its questionable conclusion, the minute-to-minute gameplay is uneven. The basic third-person shooter mechanics are loose but adequate, the only distinguishing factor being you get one second of slow-motion bullet time if you land a headshot. Guns lack the visceral pop of top-tier shooters, the touchy cover mechanic can fail you at inopportune times, and your AI-controlled squad is anything but battle savvy. You can designate priority targets at the tap of a bumper, but often they aren’t smart enough to carry out orders. I once sat for five minutes watching my dynamic duo try to take out a lone gunman positioned behind a turret. I also saw them chuck grenades through walls and take cover on the wrong side of an object, leaving them completely exposed to incoming fire.

Players spend the majority of the game moving through straightforward corridors that offer the occasional flanking position. At times you will come across a window holding up a wall of sand. Shooting out the panes creates an avalanche that can take out multiple enemies at once. This environmental hazard is fun at first, but by the seventh time you use it, its luster wears off.

Sand plays an integral role in multiplayer as well. Each map is susceptible to sandstorms during the middle of a match, during which your character moves slowly and your map bugs out, and there are several environmental hazards you can activate to bury your enemies. Outside of this unique mechanic, the offerings are rather boilerplate. Spec Ops features a healthy selection of conventional modes, and includes a decent collection of perks, weapons, armor, and kits to unlock as you rank up to level 45. Unfortunately, the large maps, small team sizes, and the mediocre gunplay prevent this from becoming a destination experience.

Spec Ops makes an admirable attempt to inject morality into a standard shooter experience. The narrative unravels at the end and the controls are subpar compared to the top-tier competitors, but the journey into madness is unlike anything I’ve played before. 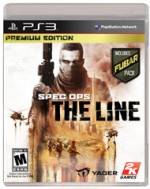 Spec Ops pulls from the rich traditions of Joseph Conrad's Heart of Darkness and Francis Ford Coppola's Apocalypse Now. Can Yager's first shooter stand shoulder to shoulder with these works?

Purchase More Info
7.75
i
Game Informer's Review System
Concept Shoot your way into the dark heart of a storm-ravaged Dubai
Graphics The desert setting gives Spec Ops a unique look amongst modern shooters
Sound Though it brings Apocalypse Now to mind, the Vietnam War-era rock is an ill fit for this modern drama
Playability The shooting controls are adequate, but the cover system and teammate AI need work
Entertainment A rare narrative-focused shooter that asks gamers to analyze their actions
Replay Moderately low