Spare Parts is a great example of how likeable characters can’t salvage a game by themselves. The humanoid robots are silent, but they’re expressive in a Wall-E kind of way. Even the game’s enemies are adorable, whether they’re the short, squat armored aliens or a planet’s assorted indigenous bugs and monkey creatures. Whatever goodwill those characters earned, however, is squandered through Spare Parts’ lackluster gameplay.

Spare Parts focuses on the robots and their mission to escape a hostile planet. The planet’s native lifeforms are hostile enough, but to make matters worse it’s marked for invasion by the evil Lord Krung, a squat little creature in a suit of space armor. The bots’ only hope is to repair an abandoned spaceship using parts strewn across its surface. Fortunately, the ship’s friendly AI is there to help.

Spare Parts make take place on an alien planet, but the gameplay is familiar. When you first start out, your character can perform a few basic attacks and jump around the world. Eventually you earn robotic upgrades, which open up new areas. For instance, magnetic boots allow you to climb up certain wall surfaces, jet boots let you hover for a short time, and nanite gloves allow you to flip special switches. Obstacles are scattered around the world whether or not you have the appropriate hardware solution, giving completionists a reason to backtrack to earlier levels and discover every last missing part.

While the game is billed as being a cooperative experience, it’s purely optional. There’s no AI companion while playing the game solo, and lone wolf types will only be missing out on a few co-op style puzzles of the “two people stand on two switches” variety.

Spare Parts is undoubtedly a charming game, but there are some significant problems beneath its candy-colored veneer. Platforming sections are awful, as it’s difficult to reliably tell where your character will be landing. The fixed camera exaggerates the issue, since you can’t line up your jumps before leaping. Instead, certain sections have you relying on a blend of instinct and dumb luck.

Boss battles are repetitive and last entirely too long. Most of them have you doing the same dull sequence of events over and over as enemies respawn around you. Your bots have an unlimited number of lives and there’s only a trivial penalty for death, so the real question is if you have the patience to endure your way to the end.

As disappointing as Spare Parts is, I hope that we do see the characters again. They deserve to be in a better game.

6
About Game Informer's review system
Concept
Explore a hostile planet with robots; gaining new upgrades and abilities to access new areas
Graphics
Characters are great looking and well animated, as are the environments
Sound
Compositions are appropriately lighthearted, and Simon Pegg’s turn as a friendly AI is warm and inviting
Playability
The fixed camera hurts the platforming sections, and boss battles last entirely too long
Entertainment
Spare Parts’ abundance of charm doesn’t save it from the dodgy gameplay
Replay
Low 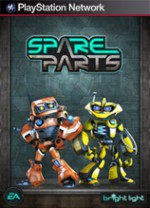