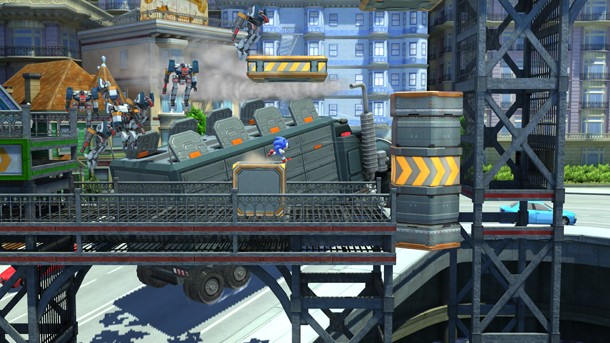 Last week at E3 2011 I was treated to a behind-closed-doors look at a new stage in Sonic Generations, Sega’s 2D/3D hybrid of classic and modern Sonic games. This revamped level has Sonic tearing through the City Escape level of Sonic Adventure 2. Sega is converting the stage into a side-scrolling stage full of dramatic last-second leaps and a new power-up for classic Sonic. The 3D modern Sonic stage is a revamped version of the original, complete with an even more menacing killer truck.

Sega started by showing off classic Sonic’s 2D version of the harrowing flight from the city. Similar to how classic Sonic games are split into upper and lower paths through side-scrolling levels, Sonic leaps between the fore- and background of this stage. The blue blur grinds rails, leaps across rooftops, and even acquires a skateboard power-up. With the skateboard Sonic’s agility and speed increase, a boost he’ll need to save his spikes from the deadly semi chasing him.

The massive truck drives off rooftops in the background in an attempt to pulverize Sonic as he navigates platforms in the foreground. One section has the truck speeding down the road towards the very platforms Sonic is standing on. The semi collides with the ledges, knocking them out of existence along with Sonic if he isn’t nimble enough. The dire necessity for speed and accuracy of this Sonic Adventure 2 level survives the transition to 2D.

The first obvious difference between the Sonic Generations version of the City Escape level and the original Sonic Adventure 2 version is the presentation. This San Francisco-inspired stage is populated with countless rooftops which extend towards a distant bay in detail that the Dreamcast just couldn’t provide. Speeding downhill and collecting rings appears to work much the same way as the original, but judging by my previous hands-on with Green Hill Zone, it will control much better. When the GUN truck attempts its inevitable revenge on Sonic, it’s no longer just some out-of-control semi. This time it sports three buzzsaws that require Sonic to use his quickstep ability as they make deadly swipes at him. Other modern Sonic powers like the boost and homing attack are in full swing here as well.

This glimpse at the new Sonic Generations stage was brief, but it offers a good idea of how Sega plans to remix levels from newer Sonic game. I also got my hands on a very early 3DS build of the game, which has classic and modern Sonic zipping around in 2D only. The gameplay didn’t seem as fluid as the console version, but hopefully the portable version of the game evolves to become as promising a title as the 360/PS3 iterations. I have high hopes for Sonic Generations and can’t wait to see what other stages they add to this love letter.