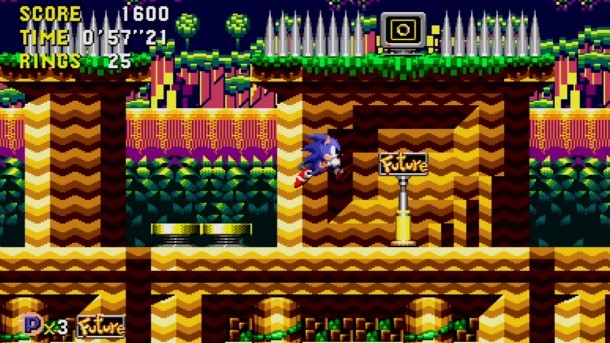 I was a bit hesitant when I first heard Sonic CD was being rereleased on PSN and XBLA. I missed out on the fan favorite as a child, having skipped out on the gaudy Sega CD Genesis attachment completely. Curious to see what all the fuss over Sonic CD was all about, I busted out the Sonic Gems Collection a couple years ago and gave it a try. I cruised through the stages effortlessly, never truly grasped the time travel mechanic, and was ultimately underwhelmed by the overall experience. I wrote the title off back then as not living up to the Genesis-era Sonic games. Until this day I've always had the niggling feeling that I didn't really give Sonic CD a fair shake. Revisiting the game on my 360, I'm happy to say that it finally clicked. I get it. Sonic CD is a wonderful treat for fans of the series and 2D platforming alike.

Sure, you could do what I did years ago and breeze through the stages, but you'd be missing out. Early Sonic games were rarely all about speed. The introductory Green Hill Zone-type levels cater to flashy loop de loops and nonstop sprinting, but eventually it's all about exploration. Sonic CD encourages exploration with a unique time travel mechanic. Given that Dr. Robotnik is constantly trying to screw over mother nature, the only way Sonic can truly erase the mad scientists massive eco footprint is by traveling back in time and destroying his environment-corrupting machines.This involves passing a sign marked Past, running at high speeds uninterrupted, and blasting back in time. Hunting down the correct time travel signs forces players to examine every inch of the map. You must also scout out a good stretch of ground to run along to pick up speed like in Back to the Future. The mechanic is inventive, fun, and forces you to do more critical thinking than it would just to run through the stages.

The level design is some of the best in the series. Each zone has clearly defined upper, middle, and bottom routes to take through stages. I really enjoyed how the layout of the level changes depending on where you are in time. Traveling into the past takes you to an industrial-free zone, complete with woodland creatures scampering about. Destroying Robotnik's diabolical machine in the past and traveling to the future reveals a tranquil place with no enemies and plenty of rings to collect. I also appreciate that there are very few bottomless pits, which allows you to relax a bit while exploring. The environments themselves are gorgeous, made even better looking thanks to this update's ability to smooth out the pixelation if you so desire.

While traveling through time and saving the future is a lot of fun, the game takes a few big missteps. Sonic CD has hands-down the worst special stages in the entire series. These faux 3D arenas task players with taking out 2D UFOs, a simple goal made infuriating due to the fact that gauging the distance of a 2D sprite is a pain. Good luck getting all the Time Stones (no Chaos Emeralds here), because I know it's going to take me some time and patience. Another gripe I have with the game is the music. While you can choose between the Japanese and US soundtracks, these songs just don't fit in with the rest of the series. Maybe it's due to the fact that they aren't 16-bit, or something I can't put my finger on, but these tracks ooze 90s cheesiness. Lastly, I'm not a big fan of the boss fights in Sonic CD. All the bouts with Robotnik (except for one creative fight on a conveyer belt) feel too easy and uninspired. Bouncing my way through a pinball-themed encounter.and exploiting a wimpy bipedal mech's obvious flaws just didn't do it for me.

Complaints aside, I've really enjoyed the recent time I've spent with Sonic CD. The game begins to shine after you get accustomed to traveling through time and exploring each unique level. This downloadable rerelease is an easy choice for fans of the series or anyone interested in some pure platforming goodness.