In 2006 the world’s favorite flying beagle made his multiplatform debut in Smart Bomb Interactive’s Snoopy vs. the Red Baron. In this Crimson Skies-inspired flight combat title players engaged in perilous air races and explosive dogfights while behind the wheel of the famous Sopwith Camel. Now the dashing WWI canine pilot makes his triumphant return in Snoopy Flying Ace, the charming and incredibly solid XBLA spiritual successor to Red Baron that will make even the most hardened Ace smile.

Snoopy Flying Ace offers single-, multiplayer, and co-op missions and challenges that put your plane handling and combat skills to the test. You’ll fly through rings in a timed sequence, protect precious monuments in exotic locales from Egyptian deserts to nighttime Parisian cityscapes, man giant turrets to fend off a fleet of enemies, or help Woodstock’s friends escape suspended mine traps that surround them. A friend can even join the fray at any time, which comes in handy during larger skirmishes such as the Zeppeligeddon missions that can, at times, be too much for a single beagle (though not impossible – come on, it’s Snoopy.) You’ll also have a chance to tinker with customization options, though you’re limited to simply choosing a plane type based on size, handling, and vitality, or practicing with different weapon types such as Leech homing missles or the explosive EMP that will help you blow your friends’ planes to smithereens. No worries about the horrors of war, though; avatars safely parachute out of the plane. Smart Bomb keeps the action family-friendly, so Lucy van Pelt won’t lose her face in an explosive deathmatch anytime soon.

One shortcoming with the single-player/co-op campaign is repetition of mission types across different environments. You’ll save Woodstock’s friends from mines on several occasions, with minimal variation aside from location. Nonetheless, these missions, though simple, do a great job at teaching players the game’s core mechanics before heading into the multiplayer space, where you’ll likely spend the bulk of your time.

Ace offers both free-for-all and team-based modes including your standard dogfight modes and CTF, and the far more interesting Dog Pile and Pigskin modes. In Dog Pile you’ll protect a bone that appears on the battlefield for two minutes while under attack by opponents. Pigskin, as the title implies, involves aerial football. You’ll pass the ball to teammates and try to drive it through your team’s goal posts, or on the defensive side you can shoot down your opponents for a “friendly” game of football. Multiplayer modes as a whole are chaotic and fun, plus awesome kill streak bonuses – such as the ability to fly the signature red dog house or having Woodstock join you as your tail gunner – is reason enough to keep coming back to work on your game.

Each mode supports 16 players, and I had no problems quickly finding a full match. If you’re looking for something private with a few friends or simply want to check out multiplayer modes on your own, you have the option to fill in spaces with AI bots. Amid the frenzied and explosive aerial action, I experienced minimal lag, and the game remained smooth overall.

Snoopy Flying Ace is a fun and accessible aerial arcade shooter with a whole lot of polish and personality. It may not offer a whole lot of depth, but for only 800 MS Points you still get quite a bit of game for your buck with more in the form of DLC on the way. Snoopy Flying Ace wins best in show for WWI flying beagle games, hands (paws?) down. 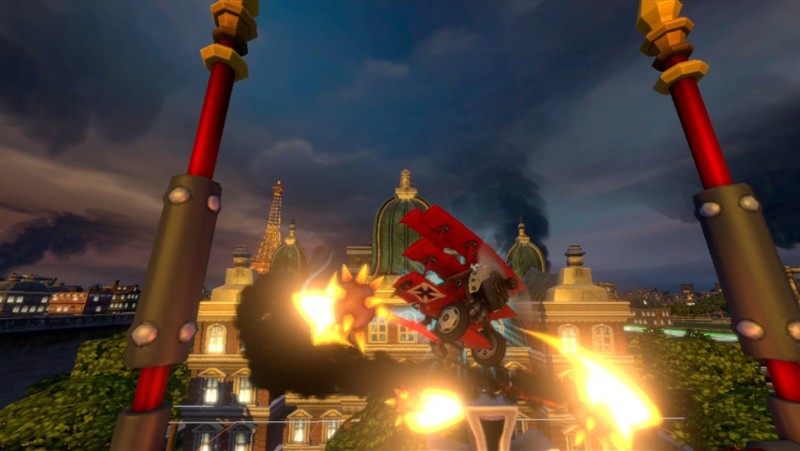 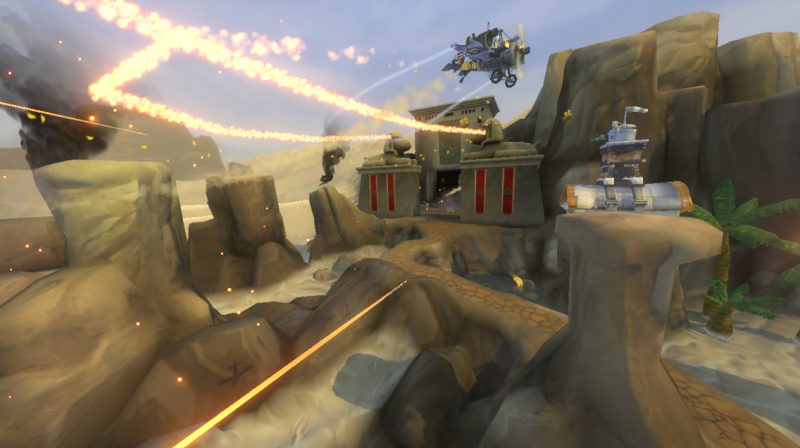 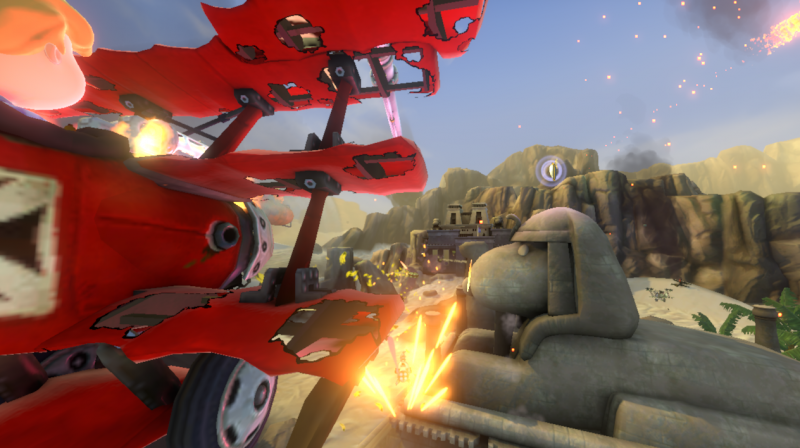 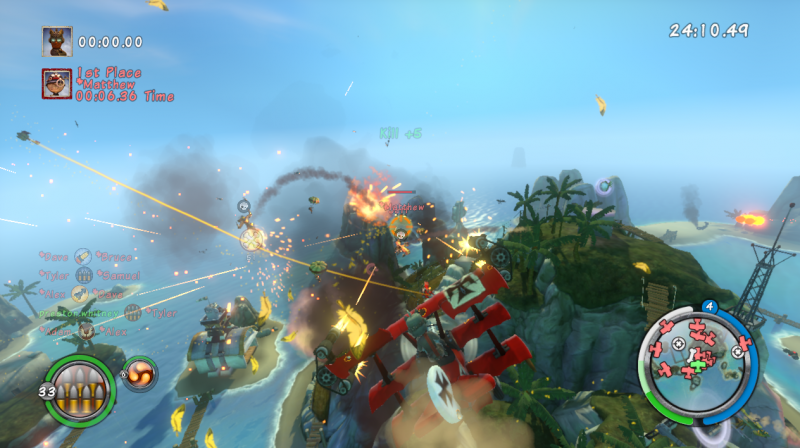 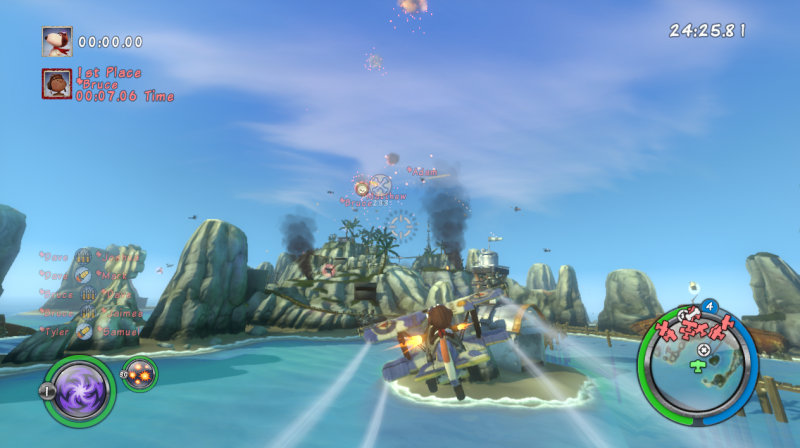 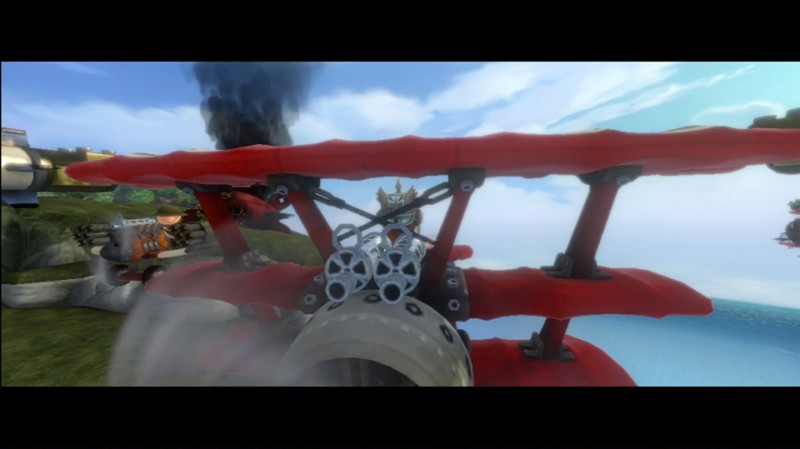 8.5
About Game Informer's review system
Concept
Pilot a biplane with a beagle on board (or any member of the Peanuts gang) equipped with explosive weapons that make your friends go boom
Graphics
Charles M. Schultz’ characters are impressively realized in the video game space. Environments are attractive and varied in design
Sound
Proximity explosions leave your ears ringing. Snoopy’s giggle when watching a plane go down in flames is adorable. Surprisingly epic score
Playability
Plane controls are tight, easy to pick up and play
Entertainment
Family-friendly title for flight combat and Snoopy fans alike
Replay
Moderate 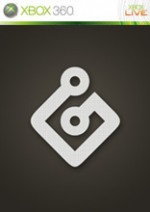