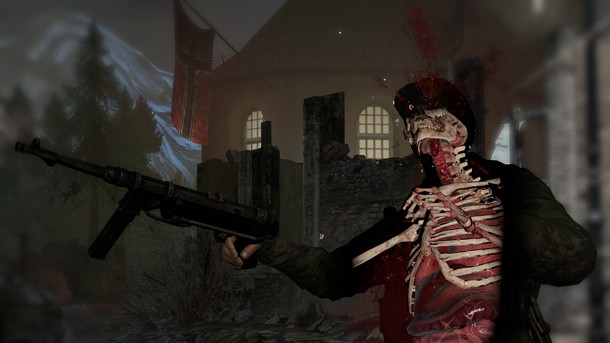 Gore hounds are easy to spot. We’re the ones that clap when a horror movie slasher tears into its teenage victim or laugh when some poor sap’s head explodes into pink mist in a first-person shooter. Sniper Elite V2 is a game for such sadists, with some of the most grisly kills I’ve ever enjoyed in a game. Luckily, it’s a pretty capable World War II sniping game to boot.

Sniper Elite V2’s standout feature is the slow motion, Mortal Kombat-style x-ray kill shots. Watching a bullet blast through a Nazi’s rifle scope and the eye peering through it is a brutal and satisfying reward for lining up the perfect shot. Watching testicles explode and skulls shatter may be a bit much if you’re a little squeamish. I consider myself wholly desensitized to video game violence, but some of these kills made my stomach twitch a bit. That being said, they never got old.

When you’re not trotting around in third-person, you’re staring down your scope. Your trusty rifle feels like it should; leading shots, compensating for bullet drop, and holding your breath are all part of the game’s entertaining attention to detail. If that level of realism isn’t appealing, you can adjust the settings if you prefer the bullet to land in the middle of your crosshairs each time. My main complaint with sniping is the rare occasion when your bullet is deflected by an invisible barrier. Tech issues like this aren’t pervasive, but when you’re playing a game in which every bullet matters, it’s a big deal.

Sniper Elite V2 allows you to be the gunman you want to be, whether that means crawling on your belly and silently taking down guards or engaging in intense shootouts from a guard tower. I savored moments when I could successfully mislead guards with a thrown rock and sneak past, but this war hero is no Solid Snake. Enemy line of sight is wildly inconsistent. Too many attempts to be stealthy were shattered by eagle-eyed enemy soldiers you’d think have binoculars glued to their faces. My heart broke when I realized all the time I spent scanning empty windows for enemy snipers was a waste – the game seems to mainly spawn in enemy marksmen after you’re discovered. These missteps don’t ruin the game, but they’re enough to offset the hardcore sniping simulation.

The action shines brightest when you’re timing covert shots with roaring thunder, dialing in a Hail Mary shot at a tank’s fuel supply, or taking out high-profile members of the Third Reich. These moments allow you to be the sniper savant you’ve always dreamed of being, and there are plenty of them. Your tour of Europe also features a good deal of variety, ranging from a V2 rocket facility to an eerie graveyard being rocked by a deafening storm. The campaign packs a lot of variety, and is fully playable with a buddy in co-op. I never get tired of counting down with a friend to pull off simultaneous headshots on a pair of unaware guards.

A handful of other 2-player online co-op modes are available. You can work together to rack up kills in the wave-based tally mode, but this barebones effort (inspired by Gears of War’s Horde mode) is boring compared to the other options. Overwatch tasks one player with ground-based missions like destroying AA guns or collecting enemy intel while an ally plays guardian angel with a sniper rifle from the high ground. In the challenging bombing run mode players must scavenge tank parts around the map in order to repair their ride home, which requires attentive teamwork and constant alertness. This mode would be flawless if not for the handful of enemies automatically spawned when you begin collecting parts. Like the magically appearing snipers mentioned earlier, forced encounters like this contradict the game’s core concept – be wholly aware of the battlefield. While I may be bummed that there is no competitive multiplayer (except on PC), I enjoyed cooperating with a friend to gradually dismantle the enemy forces.

I went into Sniper Elite V2 with one desire: Disfigure Nazis from hundreds of meters away. The game delivers on this core mechanic beautifully. While I would have preferred enemies with less superhuman vision and better stealth options, at the end of the game I couldn’t recall a scenario I didn’t enjoy. Sniper Elite V2 is a must for anyone interested in a smart shooter with an emphasis on gore. 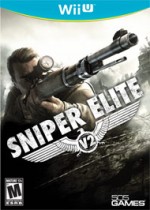