Two of this generation’s most popular multiplayer experiences have been Left 4 Dead and Treyarch’s zombie modes in Call of Duty. Action gamers can’t seem to get enough of mowing down scores of the undead, and Rebellion is next to take a stab at the concept. The studio’s new spinoff of the Sniper Elite series may not be the most original idea, but Nazi Zombie Army manages to pull off an intense and satisfying zombie-slaying experience.

Its concept is easy to understand, and laid out similar to Left 4 Dead. Like that game, it' features multiple stages that can be fully experienced in one sitting, without any persistent unlocks or story threads connecting them. To some degree, they all revolve around a concept of “collect things, run here, survive the siege, repeat.” Each stage typically lasts about an hour, and they throw the same general assortment of enemies at you. Standard zombies lumber slowly towards you, skeletons are quick and tend to swarm, giant gunner zombies require numerous headshots to take down, and sniper zombies hop from rooftop to rooftop.

What sets this apart from Sniper Elite v2 from a gameplay perspective is the complete lack of stealth. These aren’t living, breathing members of the Third Reich that you need to distract and take out subtly. These swarms of zombies require nonstop firepower if you want to live. Nazi Zombie Army is a steady stream of action, and it delivers it well. Headshots are supremely satisfying, and surviving a siege by the skin of your teeth is a genuine rush.

Mechanically, the game performs admirably. You’ll be firing Thompsons and pistols just as often as you’ll be peering down your sniper scope, and both modes of offense feel solid. Playing in co-op, it’s great to have a couple of players in elevated positions taking zombies out from afar while two others run around on the ground with submachine guns.

If you want to get the most out of the experience, play with four players on each stage. While the game can be played solo, it isn’t nearly as enjoyable that way. Without the ability to be revived by friends, stage-ending sieges can be frustrating regardless of difficulty level. Though challenging, solo play still treats you to the slow-motion x-ray kills that make the experience so fun and gruesome.

I expected this spinoff to be a quick cash-in of popular themes, but I found myself pleasantly surprised by just how exciting Nazi Zombie Army can be. 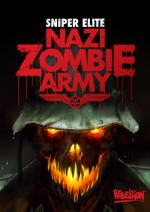 I expected a quick cash-in of popular themes, but I found myself pleasantly surprised by just how exciting this spinoff can be.