Shooting someone in the face with a sniper rifle is nasty business. The Sniper Elite series has made a name for itself by embracing these skull-busting kills in all their gory detail. Developer Rebellion has ratcheted up the brutality of these slow-motion X-ray sequences with detailed musculature on every skeleton. Unfortunately, boring campaign missions and frequent bugs hold back Sniper Elite III from its sharpshooting potential.

Rebellion swaps out the grim, bombed-out European cities of the previous entry with the bright, rugged terrain of Africa. The arid, sun-bleached environments look beautiful at first, but despite the exotic surroundings, the mountainous terrain and dirt roads all start to feel the same after a while. The illusion dissolves further thanks to the erratic, dim-witted Nazis mucking up the scenery. The German soldiers have stiff, robotic patrol routes and swivel in place unrealistically when they get a bead on you.

Sniper Elite III's linear campaign is all about sneaking through Nazi encampments among the baking sands (but they're never called Nazis and all the swastikas have inexplicably become palm trees on their banners). Sometimes missions call for you to place explosive charges, offer supporting fire, or assassinate top-ranking German officers. It's old hat for the military shooter genre, and I eventually began mindlessly chasing down objective markers without thinking much about it.

The campaign objectives all serve as a framework for the solid long-range gunplay and mediocre stealth elements. Lining up shots with your rifle adheres to the familiar routine of pressing a button to hold your breath and dial in a shot. As in Sniper Elite V2, lining up a good shot and pressing the trigger initiates a satisfying slow-motion kill sequence. The camera follows your bullet's dramatic path from the rifle barrel all the way to the doomed soldier. For headshots, the X-ray vision shows the projectile's grisly path through the skull, complete with bone-splintering entrance and exit wounds. Femurs split, eyeballs pop, and testicles explode in these gruesome finishers. These macabre, unflinching executions are satisfying at first, but the thrill wears off after seeing someone's teeth erupt from their mouths for the umpteenth time.

For a game with the word "sniper" in the title, I used my silenced pistol an awful lot. You crumple quickly when facing off with too many enemies, so avoiding attention is important. This strategy is at odds with using a loud sniper rifle, however, so you mask your noise using thunder or backfiring generators. This mechanic is fun and novel, but I routinely avoided sniping when these obscuring noises weren't available. You can't fire off more than a couple shots without having to relocate so enemies don't find you. I understand the logic, but you can still run away from your sniping perch and then just head back when the enemies lose your trail. It comes off as an annoying, half-baked attempt to keep players circulating around the map.

Speaking of annoyances, Sniper Elite III is filled with considerably more bugs than its predecessor. The game has a weird habit of resetting objects in the world when loading a save. Sometimes vehicles that blew up 20 minutes ago explode again or corpses wiggle around sporadically. Other times the effects are more troublesome, like one instance when an enemy vehicle suddenly appeared near my location and gunned me down instantly with each load. While most of the hiccups are aesthetic, they disrupt the mood of the high stakes trek behind enemy lines.

Whether you beat or abandon single-player, competitive and cooperative multiplayer modes are available. I enjoyed the tense, long-distance free-for-all sniper battles that tested my patience and perception. Laying down traps and relocating after taking a shot is more gratifying when facing off against human players rather than the idiotic A.I. foes. The entire campaign is also playable cooperatively, which helps spice up the mundane missions. Synchronizing your shots and covering one another's back injects excitement into the ho-hum mission structure. However, Rebellion has ditched split-screen co-op and doesn't support matchmaking, so hopefully you know someone with a copy of the game if you want to try it out.

I openly admit that I love gory kills and living the hero sniper fantasy, but Sniper Elite III only partially delivers on the latter. If you can't get enough of dramatic, transparent shots of enemies getting shredded by sniper fire, Sniper Elite III has you covered in spades. If you're interested in more motivation beyond the glory of the kill, look elsewhere.

This review only pertains to the PlayStation 4 and PC versions of the game. Sniper Elite 3 is also available on Xbox One, Xbox 360, and PlayStation 3.

6.5
About Game Informer's review system
Concept
Blast German soldiers in the face from hundreds of yards away with brutally detailed X-ray kills
Graphics
Impressively detailed at a glance. Upon closer inspection, enemy soldiers move like clunky puppets
Sound
Lots of German and Italian chatter mixed with annoying sound effects that play when you’re exposed
Playability
The core sniping mechanics work well, but clumsy stealth mechanics and a variety of bugs sully the experience
Entertainment
Shattering enemies’ skulls with a well-placed rifle round is satisfying at first, but the see-through kill gimmick gets old quickly
Replay
Moderate 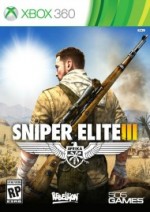