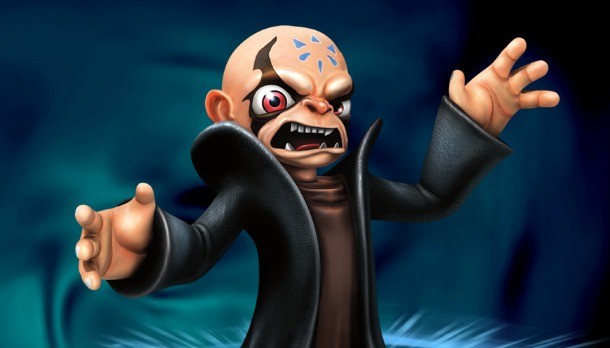 Most bad guys stick to the script of bringing evil and chaos to the world, but we occasionally see them atone for their sins and perform good deeds. In Return of the Jedi, Darth Vader turns against the Emperor to save his son. DC Comics’ recent Forever Evil story arc concludes with Lex Luthor joining the Justice League. In the Super Nintendo classic, Super Mario RPG: Legend of the Seven Stars, Bowser teams up with his arch nemesis Mario to exact revenge on an evil king.

Skylanders’ Kaos is the latest character to join the forces of good, but not by choice. In his latest bid to seize control of all of Skylands, he frees every villain contained within Cloud Cracker Prison, assuming they would help him conquer the world out of gratitude. What he doesn't bargain for one of these evildoers being far more cunning and ruthless than he is. Dressed head to toe in vibrant gold and wielding the power of the Midas touch, the villain called the Golden Queen takes control of Kaos’ army, knocking him out of the picture completely. His only hope of reclaiming his throne (and not being oppressed by the Golden Queen) lies with the Skylanders. 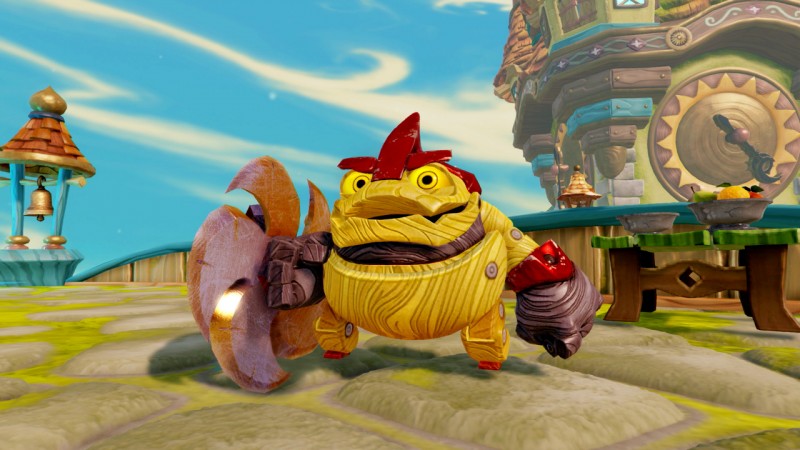 Adding this loud-mouthed antihero to the playable character pool is just one of many ways that developer Toys for Bob turns Trap Team into the best Skylanders game to date. While the gameplay core of this annualized series remains largely unchanged, the functionality tied to Kaos (and the 40-plus other playable villains) adds an enjoyable layer of strategy to combat, inspiring collectors like me to scour levels for hidden areas that could contain chance encounters with these baddies.

The villains are bona fide game changers, often empowering the player with the might of a boss-like entity roaming the battlefield. The destruction they unleash is advantageous for several reasons. When used correctly, they can either be saviors who protect your Skylander from death, or the equivalent of high-leveled MMO players who power-level newcomers.

Since the villains are locked away in crystaline constructs, you determine when they are freed or imprisoned again. When let loose, they take the place of your Skylander, but only for a limited amount of time. When they sustain damage, their clock expires faster. Once depleted, they return to the trap. The villains cannot gain experience points or gold; all of these riches instead go to the Skylander they replace. 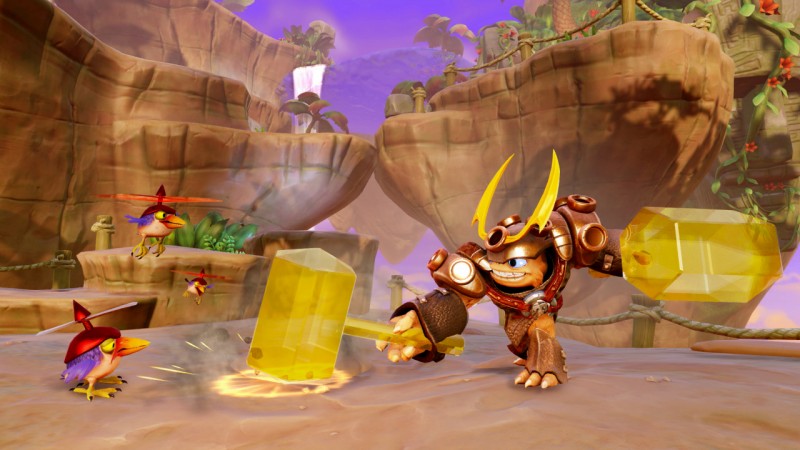 Low-level Skylanders are no longer sentenced to immediate death when thrown into a difficult combat encounter toward the tail end of the game. With the villain carrying them through, weak Skylanders could conceivably gain between two and five levels in these conflicts, without taking any action themselves. This is an efficient way of leveling up new additions to your roster.

The villains don’t disrupt the gameplay flow at all. Most of them are immensely satisfying to play, offering unique abilities not seen in any of the Skylanders thus far. Kaos, who unfortunately only playable after the game is completed, and Chef Pepper Jack are ridiculously powerful, almost to the point of breaking the gameplay balance. Kaos launches elemental blasts that decimate enemy forces. Pepper Jack breathes fire, throws explosive red peppers, and grinds enemies to pieces with a comically oversized eggbeater. I got a kick out of hearing the villains voices in the Traptanium Portal, but they don't have much to say. The repetition in lines can be annoying for some of the more vocal baddies.

Do the villains overshadow the Skylanders? To a degree, yes, but the two factions complement each other well. Other than unlocking new skins tied to unique quests that only the evildoers can complete, they don’t evolve over the course of the game. Conversely, all of the Skylanders once again offer lengthy upgrade paths, and that exciting element of not knowing what their third attack or special power will be until they are leveled up.

Level design is another area where Toys for Bob makes big strides forward. Yes, you still run in to an annoying amount of fetch quests, turtle-pushing puzzles, and lock-picking minigames, but the levels themselves are beautifully imagined this time around, rarely falling back on the elemental-based staples used in Spyro’s Adventure and Giants. Players traverse a clockwork world filled with spinning gears and transforming terrain, and a construct overflowing with food. This adventure even shows off what technology 10,000 years into Skylands’ future looks like. 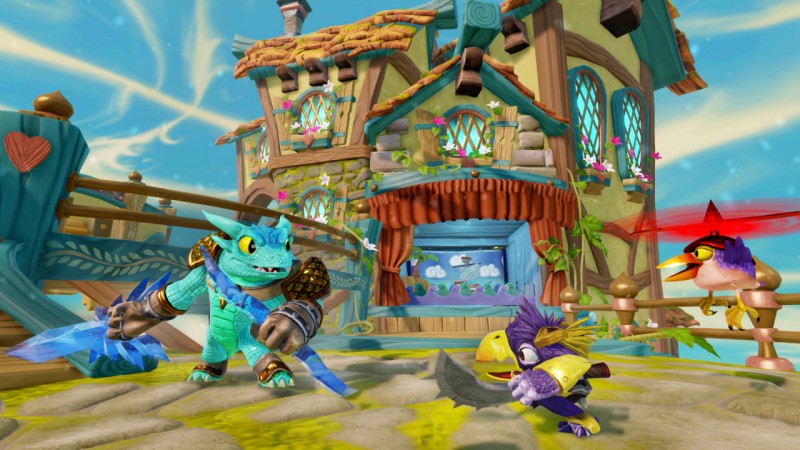 One downfall to the levels is the amount of dead time often tied to combat encounters. Waves of enemies don’t immediately populate, and sometimes delay the action so much that it seems like the game may have crashed. Some of the villain encounters are presented as significant end-of-level boss encounters, complete with cinematic sequences and attack variations. However, most of the villain battles are undercooked exercises in repetition – pushing the player to deal with the same attack patterns for far too long.

The same gripes cannot be made of Kaos mode, a tower defense-like scenario that shows just how frenzied and enjoyable Skylanders’ combat can be. Enemies crowd the screen and are unrelenting in their push to destroy a box that you and a handful of upgradeable elemental towers are protecting. Kaos mode is a great avenue to power-level characters and play cooperatively. The returning Arena mode also serves these purposes well, giving Trap Team plenty of great content outside of the story-based missions.

Whether or not you have the Skylanders required to open bonus areas, this is the biggest entry in the series, consisting of 18 lengthy missions loaded with hidden secrets and collectibles. In addition to an array of new hats, all of the Skylanders and villains can wear trinkets, like pinwheels on their tails or teddy-bear backpacks. Yes, they look utterly ridiculous now.

Giving Toys for Bob an extra year to work on this sequel paid off, not just with the concept of villains partnering with heroes, but the world they inhabit feeling more alive. Trap Team is an expensive proposition (see sidebar), but one that pounds out thrills and gives fans plenty of reason to visit Skylands for a fourth time.

8.75
About Game Informer's review system
Concept
Skylands’ heroes and villains unite for the first time to take on a new threat. In addition to buying action figures, players must now procure traps to play as the villains
Graphics
The environments are more creative in design, taking players to the distant future and to worlds overflowing with food and clocks. The new Skylander and villain designs are excellent
Sound
Kaos (Richard Horvitz) and Flynn (Patrick Warburton) get even more screen time and are as amusing as ever. The soundtrack is buried beneath the chaos and is hardly noticeable, but I do like that many of the villains have their own themes
Playability
The dynamic between the heroes and villains is nicely designed, allowing for tough battles to be tackled in different ways. The villains solve the problem of low-level characters having to grind for experience before taking on harder stages
Entertainment
The biggest and most enjoyable entry in the series. It’s great for single player or co-op sessions
Replay
High