An annualized video game series runs the risk of players praising it one year and inexplicably abandoning it the next. The reasons range from “It’s gone on for too long” (when the experience largely echoes the previous entry’s) to “The developer just doesn’t understand why we like these games” (when the gameplay changes to give the series a slightly different pulse). Ubisoft’s Assassin’s Creed series appears to be teetering on the precipice of disaster, shifting direction dramatically with each yearly release. Call of Duty made the risky gamble of moving its player base to the future of war, but it appears fans are pleased with this new direction.

The Skylanders series has largely remained the same year in and year out. New monster designs and the idea of playing as trapped enemies all fit snugly within the series’ existing framework.

Skylanders SuperChargers is the first disruptive release that gambles with the idea of introducing vehicles into the mix. This isn’t a light element shoved off to the side. The vehicles, which offer challenges set on land, sea, and air, make up roughly 50 percent of the experience. This is a huge gamble that sadly doesn’t pay off in the end. The majority of the content surrounding the vehicles lacks excitement, and doesn’t really deliver that fun Skylanders vibe. This is the first legitimate swing and miss for the Skylanders series, but it doesn’t mean the brand is running out of gas. Slivers of this adventure are wonderfully creative, and do a better job of showing how the standard Skylanders action figures can be used to deliver new experiences than the vehicles do.

My favorite part of SuperChargers is a side-scrolling platforming level that transports the Skylanders inside a children’s storybook, complete with a stylish illustrated look and spoken narration for the story developments. This stage is a fun change of pace that sadly doesn’t last nearly long enough. Another stand-out level is Monstrous Isle, a world that transforms the Skylanders into gigantic Kaiju beasts that can destroy sprawling cities and squash enemies under their feet. Cap’n Cluck’s Chicken HQ is another fun level that gives us a look at Skylands’ version of a fast-food chain’s operations. Equally hilarious and disturbing, the Chicken HQ is one of the few stages that does something interesting with the vehicles – a Crash Bandicoot-inspired escape scene that pushes the player to dart away from a giant, angry rooster.

By the third level, I would grimace whenever I saw an icon telling me I needed to place a car on the Portal of Power for a vehicle sequence. The cars are the weakest part of the campaign, and most are tied to the critical path. These tracks are overly wide and are largely free of any challenge. The most excitement usually comes from turning slightly to hit jumps and nab coins along the way. Pop-up barricades are introduced in later sequences, but again, the abundantly wide track gives you more than enough room to maneuver and removes the intensity from the challenge. The cars deliver further headaches in the arena battles, which end up being a test of overcoming cumbersome controls to drive in circles while firing at opponents. The racing component, which is split off from the critical path and isn’t mandatory, offers a little bit of fun in that competitive Mario Kart kind of way, but the racing mechanics are sluggish, the auto-use power-ups are totally uninspired and a strange idea, and the events feel like they drag on for far too long. Vicarious Visions’ artists deserve praise for creating visually stunning tracks – such as a course set on the back of a giant dragon – but the thrills just aren’t there to back up the eye candy. This also puts a damper on Skylanders’ online debut, which allows four players to race against each other.

The other vehicle sections in the campaign fair just as poorly or worse than the cars. The side-scrolling submarine sequences, which push the player to squeak by mines and other dangers, are maddeningly boring. The aerial dogfighting and overall flight mechanics are moderately enjoyable, but run into the problem of the vessels taking up a little too much real-estate on screen, which often leads to targets being blocked from view.

It pains me to continue picking on the vehicles, but they are also the worst collectible in the series’ history. Next to cool-looking dragons and goofy monsters, an ordinary-looking submarine or a car without a driver really isn’t that impressive. They go against everything I like about the Skylanders games. I don’t want to collect them, they don’t make my imagination run wild, and I don’t want to play them in the game. They even destroy the cooperative play. When two players enter a vehicle segment, one player controls steering, the other fires the weapons. This approach baffles the mind. For a game that has always offered two-player adventuring, why not figure out how to make two vehicles work at once?

When SuperChargers is at its best, it has nothing to do with driving or flying – it falls back on that core gameplay formula that has remained fun for the last five years. New characters like Fiesta, Stormblade, Spitfire, and Smash Hit are wonderful additions to the team. The new enemies are creative, and pose a great challenge for people who play the game on the Nightmare difficulty. Vicarious Vision also loaded the game with fun things to collect, including interactive legendary treasures, cards for a vastly improved version of Skystones, more hats, and hilarious Kaos story records.

When it’s true to what came before, SuperChargers can be a great time. When the vehicles show up, the party is over. While players can choose to avoid all of the sea and air sections, they are no longer little secondary diversions. Each vehicle moment is lengthy and can affect the level itself, including the availability of collectible items. Undertaking these tasks is recommended for fans who want to deck out their characters in the best gear, even if the fun can drag to a halt in these moments.

In the face of stiff toys-to-life competition, Vicarious Visions and Activision took a chance on a different style of play for this annual series, and it didn’t pay off. Here’s hoping the series gets back to the basics, or finds a fun new way to put the characters' personalities and talents front and center and not hidden behind a vehicle’s hull. 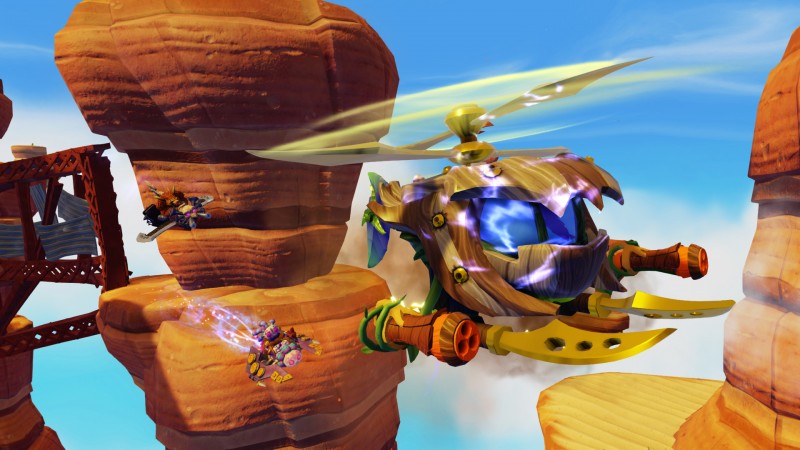 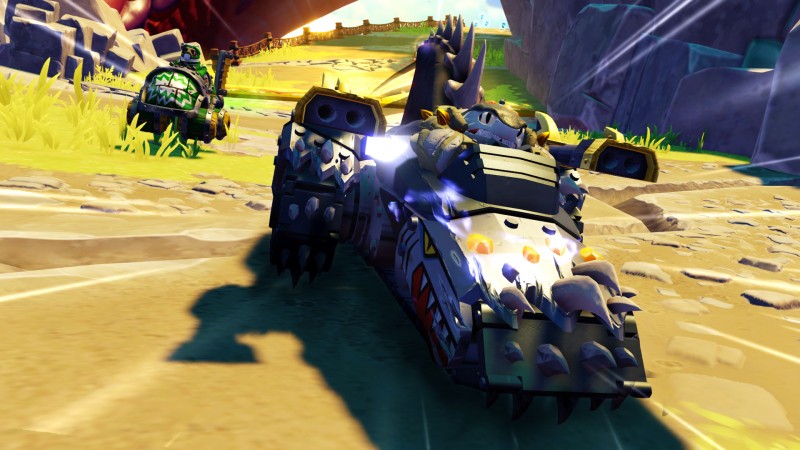 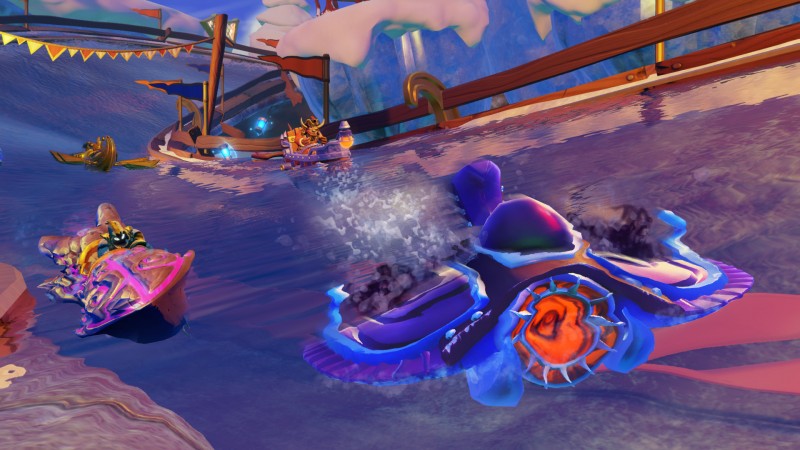 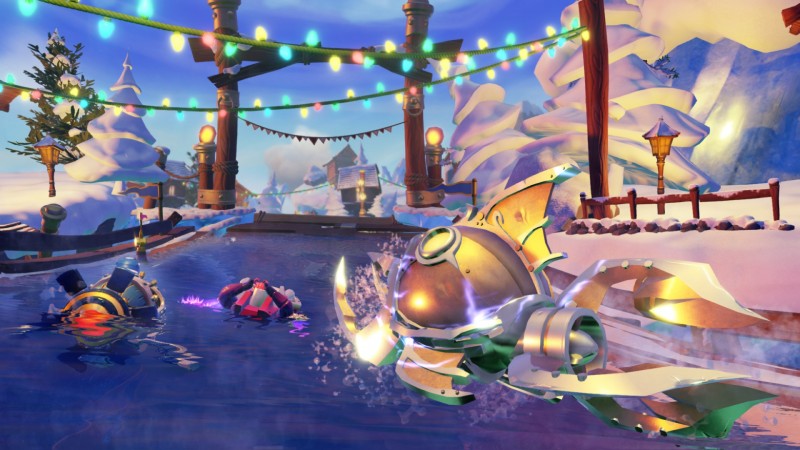 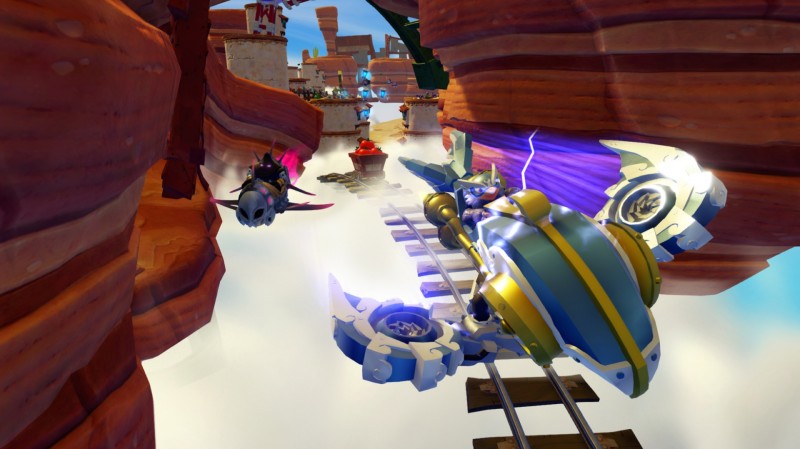 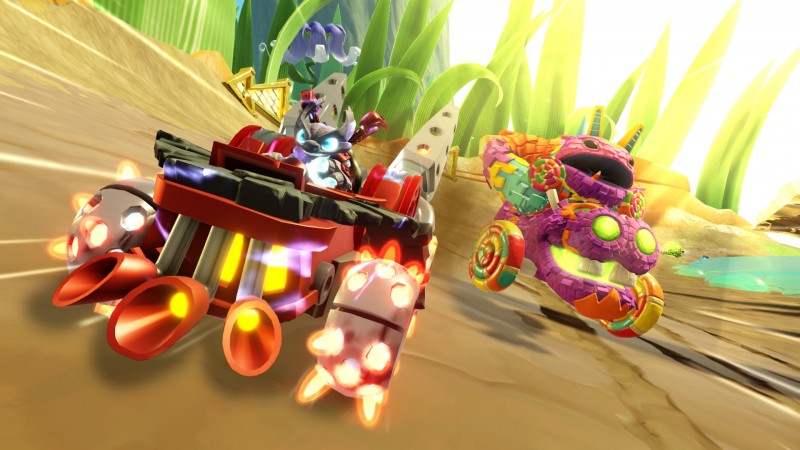 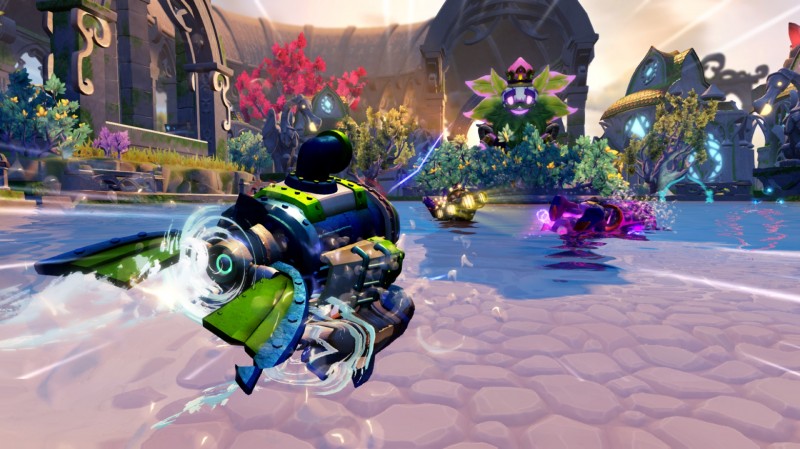 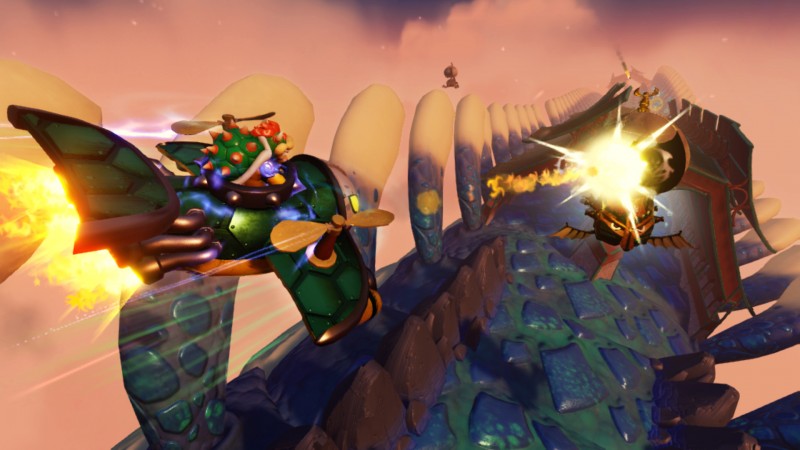 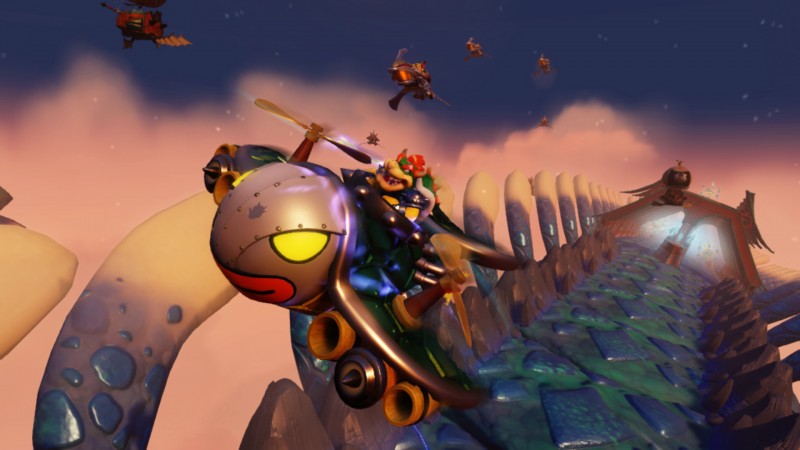 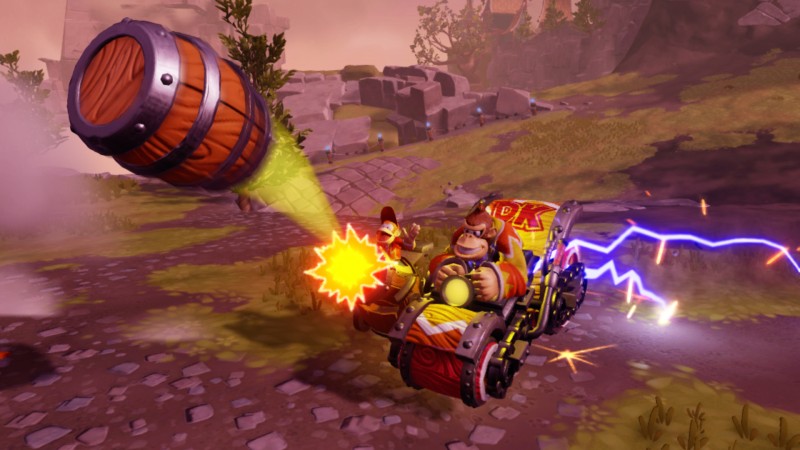 6.5
About Game Informer's review system
Concept
The worst entry in the Skylanders series. The vehicle segments sap the fun and personality from the experience, and are usually light on challenge
Graphics
The worst entry also happens to be the best looking. The colorful detail in the environments and creativity in the beast and enemy designs shines through in every level
Sound
One of the best ensemble casts in video games delivers another fine performance. The vehicle sounds and score are also quite good
Playability
When it’s the Skylanders of old, it shines. When a vehicle is introduced, it usually falls apart
Entertainment
A major disappointment with a silver lining: We likely only have to wait a year for Activision and Toys for Bob to get the series back on track
Replay
Moderately High