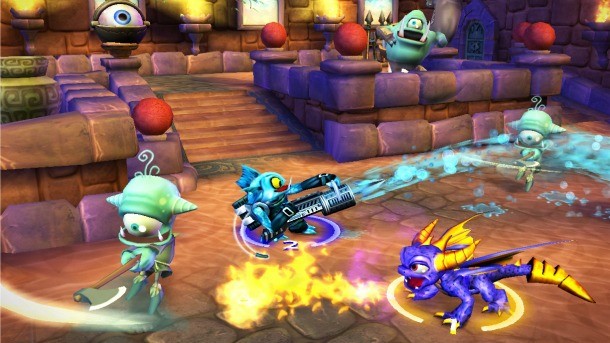 Skylanders Spyro’s Adventure is an odd title. It’s the most interesting entry in the Spyro universe since creators Insomniac parted ways with their cute purple dragon. However, it’s not what you expect. This is not a platformer – there’s not even a jump button. Instead, it’s a Diablo-style action/RPG loot-fest aimed at the younger set, augmented by an admittedly clever interface that allows you to swap in small figurines that become in-game characters through the use of a lighted base connected to your console.

While this technology is largely the world’s most elaborate character select interface, it also has big of magic to it – especially when you realize that all your characters' attributes, upgrades, gold, and items are saved to an RF chip in the figure. This makes it easy to bring your best Skylander over to a friend’s house for drop-in, drop-out co-op play. It’s a charming, fresh take on the action/RPG that kept me rapt for well over 20 hours. However, under the cute exterior lies a business model that’s nothing short of diabolical.

Let’s start with the good part. An art exists in constructing a game that hooks players into the endless quest for more gold, items, and characters and upgrades. Skylanders does this perfectly, in a way that is accessible to kids but still appealing to older gamers. As you change between the over 30 Skylander characters available (for purchase – more on that later), you’ll find that each has its own strengths, weakness, and unique upgrade paths. From Stump Smash’s melee might to Drobot’s ranged lasers and sharp flying gears, nearly every character has a use throughout the course of the 20-plus hour adventure. The basic controls work well, and the Wii version even uses light motion control elements to good effect. A wide range of enemies exists, and each level delivers new tricks, puzzles, and even brief action sequences that recall Spryo’s platforming roots.

It’s worth noting that, while his name is in the title, Spryo is reduced to a bit player in his own game. You can switch out figurines at any time, meaning that no one character is central to the tale at hand. The story itself – though apparently written by Toy Story scribes Joel Cohen and Alec Sokolov – is generally just old-school boilerplate. A dark lord named Kaos is unleashing “darkness” on the Skylanders’ world and it’s your job to stop him…sound familiar? 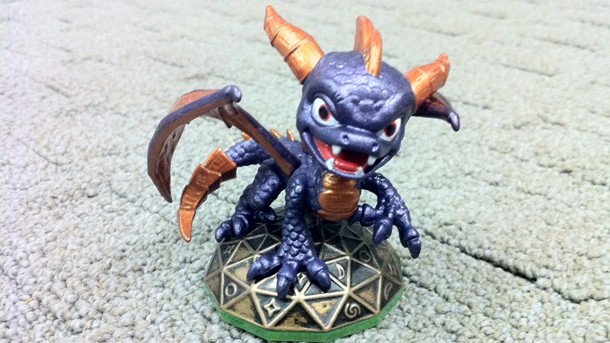 So what’s the catch? If you want to see everything this game has to offer, you’re going to pay some extra cash. The base pack ($70) comes with three Skylanders, the portal base, and the disc. However, there are eight elemental types of Skylanders. Since certain areas are accessible only to certain elemental types, you need one of each elemental type to see everything on the disc. Those sell for $8 a pop, or $20 for a three-pack. There’s also DLC style content like a pirate ship that opens up a new level in the hub world for another $20 (though it does come packed with another character figure and some bonus items).

Essentially, this amounts to micro transactions via small toys. Each Skylander you own is another life, and at seemingly every turn the game encourages you to buy more. When you find Soul Coins (which open up a character’s highest upgrade combat move), a slick preview videos runs showcasing the skill for a character more often than not you don’t yet have. This encourages little Johnny to beg his parents to take him to his local store to pick up the character for which he already has a special power.

But that’s not all. Activision gave me 12 Skylanders for my playthrough, and I needed every single one in the grueling last boss battle (which I didn’t even beat until Adam joined me for the excellent co-op). I’m not opposed to allowing players to buy added value, but this already expensive $70 title basically requires another $30 investment just to unlock everything in the base game. It’s a shame.

Armed with a nice roster of characters, Skylanders is an engrossing experience. Outside of an odd difficulty spike at the end and a few less-than-polished moments, the game hits its target. If I were a kid, I have no doubt I’d be saving my pennies to buy more Skylanders. However, as an adult, it’s hard not to feel manipulated.

8
About Game Informer's review system
Concept
Take Spyro and a host of Skylanders heroes on a quest that resembles a kid-oriented Diablo with some light puzzle solving and action sequences
Graphics
It’s not the most ambitious game, but Skylanders’ colorful graphics will bring you back to the PSone/N64 era
Sound
An amazing score that could hold its own against many CG animated films
Playability
The basic gameplay is solid, with varied play styles and interesting combat upgrades for each character
Entertainment
A few minor quibbles aside, I had a blast playing Skylanders. Still, you can’t help but feel like Toys for Bob has constructed this game to manipulate you into buying more figurines
Replay
Moderately High