In the film Toy Story 3, we watched Andy grow into an adult and leave his toys behind. Skylanders Imaginators has apparently matured to that age, as the toys have been pushed to the side to make room for character creation. That’s right, this toys-to-life game is at its best when the action figures are left in the box, and players are using their imaginations to design their own monsters and warriors. This is a strange move on developer Toys for Bob’s part, but the pay off is twofold; equally in empowering the player with ownership over their characters, and making the gameplay more rewarding through the addition of loot.

Since this is a Skylanders game, the character-creation tools are linked to a physical product called the Creation Crystal. By placing this item on the Portal of Power, players can tweak just about every aspect of their monster, including appearance, gear, catch phrase, voice pitch, and more. The tools are easy to use, and the characters look just as colorful and animated as any of Toys for Bob’s designs. Players can even send their design to a phone app, where they can purchase trading cards, T-shirts, and 3D-printed action figures of their beloved custom beast.

Skylanders’ purchasable goods have always been fair in design, but the Creation Crystal teeters on the edge of questionable practices. When a Crystal boots up, the first thing players must do is select the class of character. The classes, of which there are 10, make a huge difference in how the game is played. An archer or bazooka type are radically different than the knight or brawler, but there’s no grace period for experimenting; once you select a class, your decision is final and you cannot change it – you’ll need to buy another Crystal to try again. I wasn’t happy with the first Skylander I made, and ended up shelving that figure to try another, an attempt that required another $10 Creation Crystal. If you do happen to design a character you are happy with, you can alter its appearance as much as you want, and you’ll end up doing this more than you think, thanks to the game showering you with loot. You’ll get it for everything; defeating waves of enemies, completing minigames, taking down bosses, finding secret areas – it’s a wonderful thing. Most of the loot is random, contained in chests and organized into rarity levels. Much like a Diablo game, it feels great to add a legendary weapon or armor piece to your avatar.

A warning to parents: Skylanders Imaginators supports in-game microtransactions, and the prompts to access them cannot be avoided. Rather than playing the game to uncover loot, players can purchase chests through the store. People who impatiently jam on buttons while opening their chests (of which you’ll accumulate a wealth of in each level) will likely click into the store and queue up a purchase. The microtransaction placement is overly aggressive, but players likely won’t have to buy anything unless they want a full collection. I never once felt the need to purchase anything; I instead found myself overwhelmed by the number of chests that would accumulate through gameplay. If you don’t unleash your creative talents, Skylanders Imaginators can be played just like any other Skylanders game. All of the action figures from previous games are still compatible, and you can also purchase new Sensei characters – the most powerful Skylanders yet. The Senseis are large-scale figures (much like the Giants or Trap Masters) that can unlock unique zones and unleash a special timed attack that can make short work of any of Kaos’ forces. The push to buy more Sensei figures is again more aggressive than usual. Each time a new Sensei is added to the game, the level cap for all Sensei characters goes up by one. That’s a powerful motivator, but don’t think for a second that you need it. Level 20 (the default cap) is more than enough to complete the game on normal. The additional levels truly only make a difference on the Nightmare difficulty setting (which needs to be unlocked by completing story mode once). I enjoyed playing as all of the Sensei figures, which include Kaos. He's powerful to the point of game breaking, but that's okay; he should be, he's the big bad. Master Tri Tip, a triceratops with a big club, is also a serious threat from long and short range.

Although Kaos is a great addition to the playable roster, his bid to destroy Skylands is a little undercooked, lacking the maniacal plot hook we’ve seen in all of the series’ previous games. Toys for Bob rushes through the story beats. We mostly hear snotty remarks from a floating, holographic head of Kaos, who turns up everywhere. The game is surprisingly light on humor, too, a result of the amusing supporting cast being pushed to the side to free up dialogue for the Skylanders. That’s right, they finally speak. For the first time, players will hear from Spyro, Trigger Happy, Stealth Elf, and more – a switch that likely ties into the upcoming Skylanders show on Netflix.

As creative as the themes are for the level designs, many are bogged down with simplistic box-pushing puzzles and uneventful stretches. A stage themed as an arcade mostly serves as a way for players to spend time with the game’s multitude of lackluster minigames and diversions. Overworld navigation is often more interesting than any stage, thanks to a dramatic increase in the Skylanders’ movement speed, and this area opening up to offer more secrets, secondary objectives, and the addition of encounters. The overworld smacks of a proof of concept for an open-world Skylanders game – a shift that works well. I wouldn’t mind this version of the open world explored further in the next installment.

Combat is once again where Skylanders shines brightest, and it’s great in Imaginators. Toys for Bob throws caution to the wind with most encounters, often overwhelming players with powerful waves of foes, or powerful bosses that you have to chip away at. Unleashing a Sensei special attack just as the enemy forces are about to crush you is good fun, and an easy way to level up.

As much as I enjoyed playing as my own created character, the collector in me felt like something was missing. Part of what makes Skylanders great is the action figure element. A tube containing a glowing rock isn’t nearly as cool as a beautifully sculpted monster. The charm of seeing that character come to life is partially lost. Even with players receiving a wealth of rewards, Skylanders Imaginators feels somewhat uninspired. Kaos is off of his game, and Spyro and his cohorts aren’t needed as much. Where this series goes from here is anyone’s guess, but I hope Activision takes a more calculated risk in shaking the formula up. Giving players creative control isn’t enough of a spark to make this experience shine. 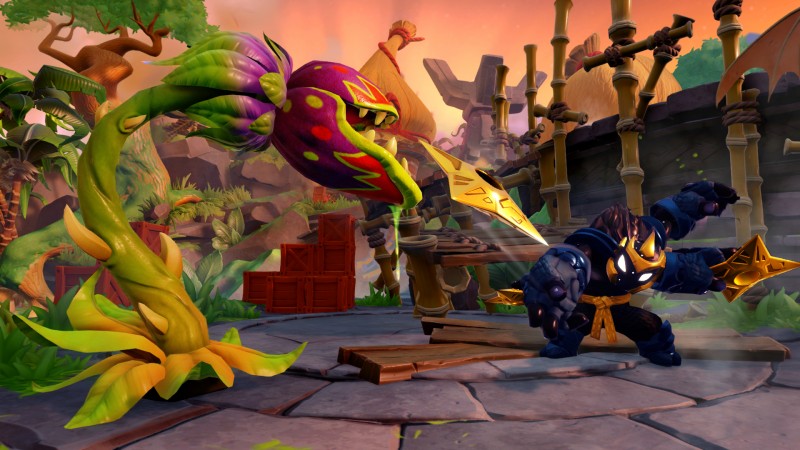 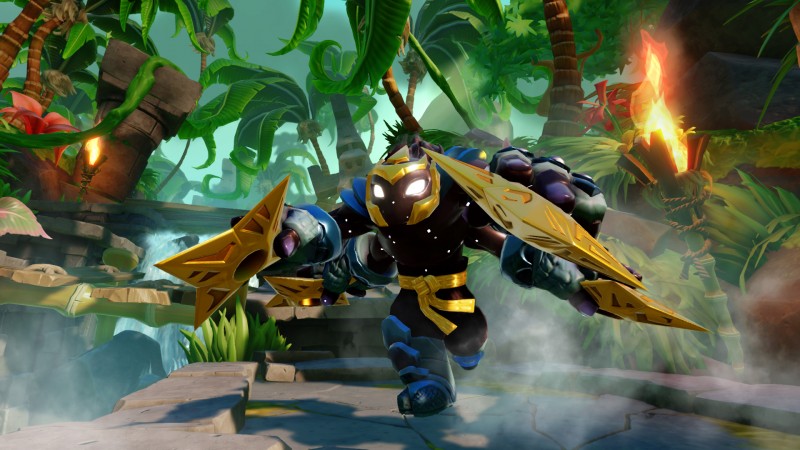 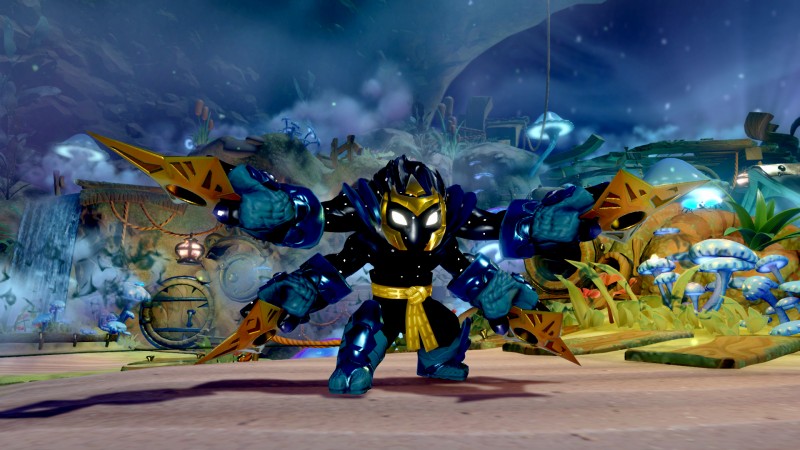 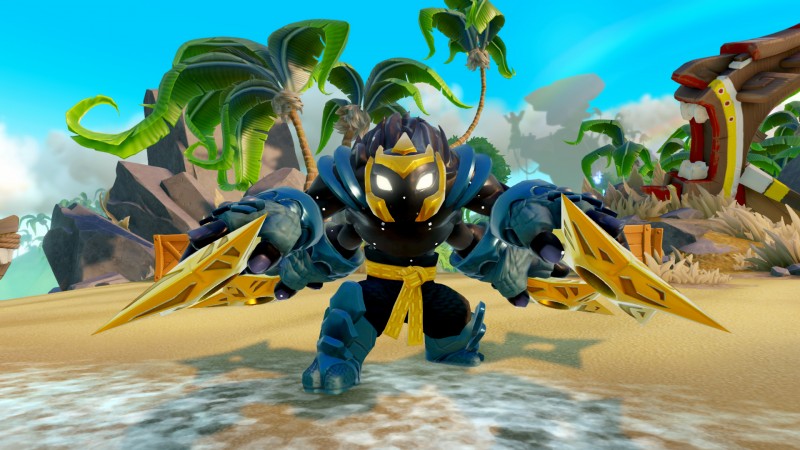 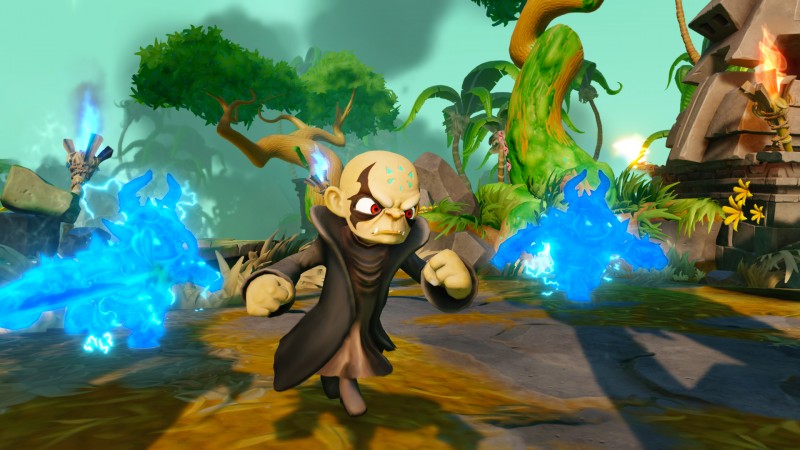 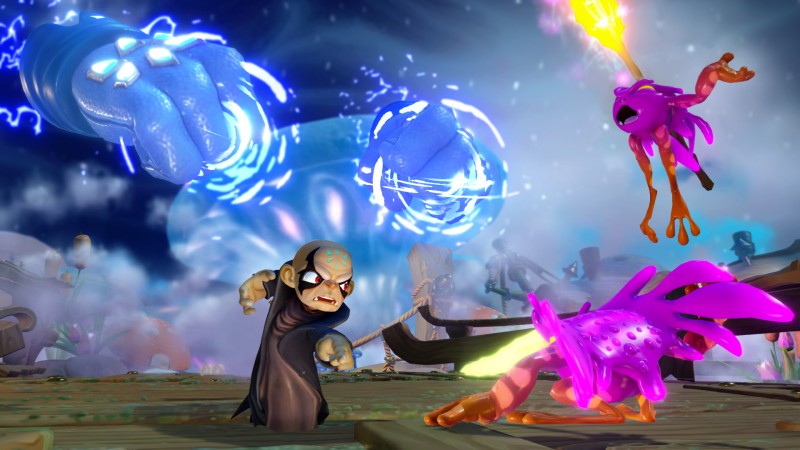 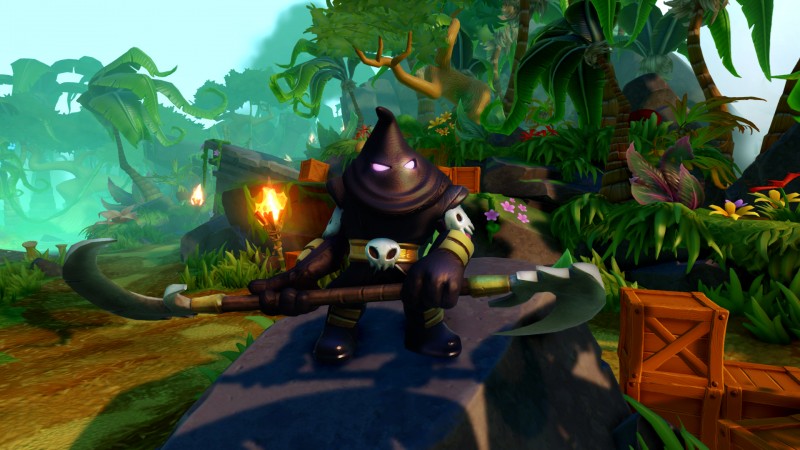 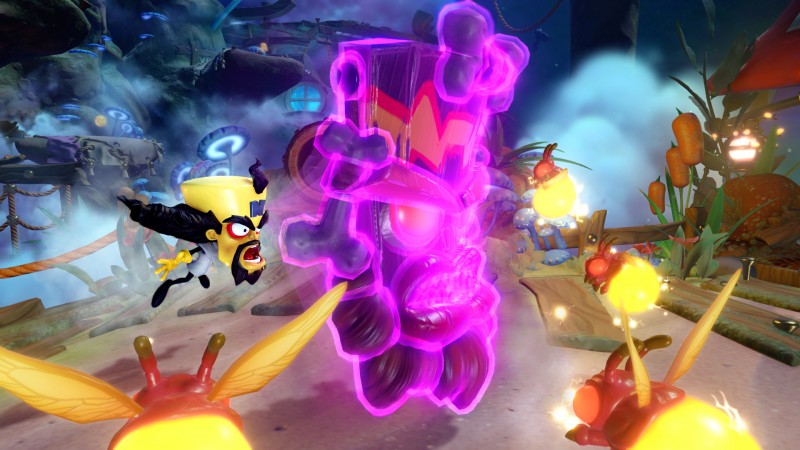 Purchase More Info
7
i
Game Informer's Review System
Concept A toys-to-life experience that is at its best when the toys are not used
Graphics Players have plenty of customization options to dive into for character creation. These Skylanders look just as colorful and creative as Toys for Bob’s designs, even when the least likely of parts are mashed together
Sound Hearing from the Skylanders is a nice addition, but their dialogue isn’t great. Also brace the kids for Trigger Happy’s voice, which sounds like a demonic Elmo
Playability Levels are not as engaging, but the combat sequences always deliver heated encounters and a need to vary up techniques
Entertainment A strange deviation from the traditional, action-figured based formula that succeeds in rewarding players, but comes up short in story, levels, and collectability
Replay Moderately High