Sky Force Reloaded is a bit unusual in design. Grinding for levels has more to do with your progress than the skill of weaving through a sea of bullets. This may sound like a dreadful approach to a vertical-scrolling shooter, but Sky Force Reloaded succeeds in making almost every second matter – whether it’s victory over a challenging boss or defeat to a basic enemy. Your ship is continually evolving, gaining better weapons, shields, and even the addition of A.I.-controlled assistants. The degree to which the ship improves is significant – almost comically so – giving players the firepower to flawlessly complete levels they may have deemed impossible hours before. Developers Infinite Dreams and Crunching Koala created a power trip of leveling that just happens to occur within excellently designed shooter.

The gameplay sticks to the basic script of classics like Raiden and 1942, requiring players to do little more than hold down the fire button while weaving through fighters and bullets. It doesn’t offer a hardcore “bullet hell” experience, but varied enemies and nicely designed waves of action elevate this basic formula to deliver enthralling stages that conclude with wild boss battles. The controls are smooth, the visuals are clean, and flow of play changes to increase the intensity or give the player a needed breather. One level strips away your weapons entirely, almost making the action feel like a stealth game in which you veer away from threats rather than engage them. Diving into a level for the first time likely won’t go well. A stream of 10 fighters, which could be mowed down with ease in a previous stage, may only be partially destroyed, since your weapons aren’t powerful enough. With those bogeys still occupying the play space, you will likely be overrun by foes in a matter of seconds. You’re probably going to die.

Like all shooters of this ilk, memorizing formations helps, and may be the only thing you need to complete the stage. I entered several levels underpowered and managed to get through them. It feels great knowing you defied the odds. In most cases, however, I would die, retreat to my hanger with the currency I earned in my run, and use it to enhance my craft’s abilities. Every little upgrade gives you a better shot. That’s the routine I got into, and it’s an addictive one, where I continually found myself saying “just one more game” and “one more upgrade.”

I’m torn between what’s more rewarding: achieving victory through sheer skill, or annihilating a stage with an overpowered ship. They both define Sky Force Reloaded, and show how its gameplay can be exhilarating for different reasons. Sure, playing through the same level a dozen-plus times to farm currency is annoying, but the rewards you reap make it worthwhile, and they go well beyond upgrades. In one run, a colored ship part may appear after an enemy is destroyed. You lose it if you die, but it’s added to your collection if you finish the stage. When you own all parts of a particular color, a new ship is forged, offering different functionality (such as more health or a different firing arrangement).

Collectible cards also appear randomly; some activate immediately to give the player 15-minute bumps, like an increase to the maximum firing rate, or making the megabomb more powerful. Other cards offer valuable permanent boosts along the lines of a lucky shield sometimes activating after you are hit, or a support drone that flies at your side. Collecting the cards is another fun aspect of the experience that is again only achieved through time vested.

The effort the player puts in also funnels into career statistics. When milestones are reached, new technicians join your team. Only one technician can be active at a time, but they are game-changers. A tech named Burton Panic randomly fires off his own supply of power-ups, which can help or be hilarious if no enemies are nearby. Another tech named Kate Brush paints over your first scratch, meaning you stay alive longer. All of Sky Force Reloaded’s side elements add up in a big way, and play into the central hook of the game: becoming more powerful. Even if you max everything out, the game still delivers a decent challenge, especially in the final levels.

Most people that devote time to leveling up should be able to finish the game on the standard difficulty, but beating it on insane requires plenty of skill. I enjoyed almost every run – both in single-player and local co-op. Having a friend at your side helps in farming and taking down harder stages, but also creates more chaos to decipher.

Sky Force is a long-running series, but this is the first entry that truly hooked me and made me want to play more just to see how ridiculously overpowered my ship could become.

8.5
About Game Informer's review system
Concept
A traditional vertical-scrolling shooter backed by a deep upgrade system and a wealth of collectibles
Graphics
Bounces between modern and science-fiction themes, and the clean playfield makes enemies and bullets easy to read
Sound
The constant sound of a laser cannon unloading is surprisingly soothing. The music doesn’t jump out, which gives room for incoming threats to be identified through sound
Playability
Excellently designed encounters make the basic action of holding down the fire button enjoyable. The controls are smooth, and the action never escalates to the point of bullet hell
Entertainment
The shooting is fun, but the real hook is devoting time to creating a terrifying killing machine
Replay
High 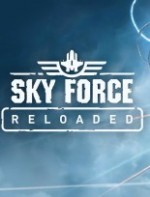