Skulls of the Shogun Turn-based tactical games aren’t plentiful on Xbox 360, but Skulls of the Shogun helps fill the void adeptly. It’s the kind of strategy game that I love; it lets you visualize and execute your best-laid plans, even if they can go down in flames.

Skulls is a grid-based tactics game without the grid. Regular units can move and attack in any order, and you’re free to use up all or none of your units’ allotted movement – which is always shown via a real-time circle interface. In general, the game accurately shows you the outcomes of your actions, whether that’s where you can move or how much damage you’ll inflict if you attack.

That said, Skulls of the Shogun isn’t simple. The boards contain environmental concerns such as cover, deadly cliffs, and the occasional intervening events/units, and they are thoughtfully laid out (each of the four seasonal levels contains five individual boards). Resource-generating rice paddies and monk-summoning shrines are strategically placed, and their production has a relatively small cap, which thankfully keeps battles from taking forever. Commandeering an enemy shrine destroys the corresponding monk, and the rice paddies and shrines emphasize the importance of controlling resources for your army – which include the skulls dropped by fallen units that can be eaten for upgrades.

As easy as it is to look at a board and start to piece together your attack strategy, the AI does a good job flanking, prioritizing its actions, and keeping you guessing. Enemies did something I wasn’t expecting more than a few times, and on several occasions I thought I had the match in the bag only to have the battle continue for a dozen or more turns.

Naturally, Skulls works great as a multiplayer title, and it not only gives you the option of four-player offline and online play, but also asynchronous, turn-by-turn multiplayer that can span the 360, Windows phones, and Windows 8 PCs. The mode is further differentiated by the ability to make or break alliances with others during the free-for-all battles.

Skulls of the Shogun could have more action and upgrade options for your units (like making unit facing more important), but it’s a fun, well-executed title with a great sense of humor. Plan on playing it, even if not all your plans will come to fruition.

For more on the game, check out our Test Chamber below as well as my quick strategy guide. 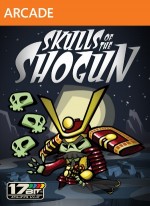 Skulls of the Shogun

Skulls of the Shogun is the kind of strategy game that I love; it lets you visualize and execute your best-laid plans, even if they can go down in flames.

Purchase More Info
8.5
i
Game Informer's Review System
Concept A well-executed turn-based strategy offering exclusively for XBLA
Graphics The take on the classic Japanese woodblock look is fun, colorful, and makes units distinct from each other. Each level is also based on a season
Sound Low-key music is in the background, and the characters speak in fake Japanese
Playability I would have liked the ability to rotate the map, but the game is solid enough that you won’t feel cheated
Entertainment Expect enough options to keep things interesting without being bloated and confusing
Replay Moderately High