A Trip Down A Rabbit Hole With Recognizable Lining
by Andrew Reiner on Jun 29, 2010 at 06:58 AM
Publisher: Activision
Developer: Raven Software
Release: February 15, 2010
Rating: Mature
Reviewed on: PC
Also on: PlayStation 3, Xbox 360 Singularity is a thrilling, provocative, yet oddly familiar journey through the fabric of time. In this alternate take on historical events, Joseph Stalin’s role in the Cold War is heightened when Russian scientists discover a new element on the island of Katorga-12. This element holds untold power, and even though it’s unstable, Stalin accelerates the experiments. Death, contamination, and unexplainable phenomena are all Russia has to show for its efforts. Katorga-12 is quarantined and forgotten. History stays the course until you arrive on the island in 2010.

Katorga-12 is a place of scientific wonder and supernatural horror. Rather than letting players free fall down this rabbit hole, Raven Software sends them down in a bathysphere. Katorga-12 is bathed in Russian colors and propaganda, but the architectural design feels like it was stripped from the notebook of BioShock’s Andrew Ryan. This Russian base has an amusement park feel to it, and just like Ryan’s Rapture, its history is detailed in audio recordings, video reels, scientist notes, and hastily written wall messages. The guiding voice even bears a physical resemblance to Andrew Ryan, who (surprise, surprise) tries to blow your mind in a similar way to Ryan’s “would you kindly” reveal.

Raven doesn’t hide the fact that Singularity is heavily influenced by BioShock. Rather, the developer uses this familiar design to paint a unique picture. Sure, I found myself thinking about Ayn Rand’s objectivism at certain points, but this story’s most intriguing moments are tied to the greed of an empire and the conflicting voices within it. Raven does a phenomenal job delivering the fiction. The experiments, and people conducting them, are fascinating and believable. This tale runs out of magic roughly halfway through the game, but it picks up in the later stages and concludes with three satisfying alternate endings. The good ending, if it can be called that, made me do something I never thought I would in a game – a powerful moment, to say the least.

Singularity’s gameplay starts strong and ramps up as the adventure ages. Thanks to a time manipulation device, your protagonist can degenerate or revitalize the age of an object. This device can revert war-torn staircases and rusted electrical boxes to as-good-as-new states. A handful of great puzzles are attached to environmental repair, but these opportunities are surprisingly rare. When they pop up, Raven recycles the same techniques used in previous puzzles.

Most of the time powers are reserved for combat. Singularity makes you feel like a badass with its excellently crafted gunplay. Throwing time manipulation into the arsenal makes you feel like an unstoppable god. Pointing a finger at a Russian soldier can lead to his body aging a thousand years in a second. Highly agile enemies that bounce off of the walls and cloak on the ground can be frozen in a temporal distortion bubble. As they sit there in a helpless state, you can fill their bodies with as many bullets as you want. Slowing time turns sniping into one of the most relaxing actions I’ve come across in a game. I rarely died in Singularity, but that doesn’t mean it lacks challenge or excitement. Most combat scenarios unfold with a high-octane, “use everything you have in your arsenal” urgency. New enemy types, powers, and weapons are doled out all the way up to the final conflict.

I jokingly told my co-workers that Singularity is more BioShock 2 than BioShock 2. While meant as a subtle jab at Singularity’s “borrowed” designs, this statement relates to finding a gaming experience that transports players to a new world filled with discovery and the unexpected. Singularity’s greatest shared quality with BioShock is Raven’s realization that gamers want new experiences, not another taste of the same trending flavor.

This can even be said of Singularity’s multiplayer component. Rather than making sure it has every mode from every other FPS, this experience focuses on something different: creatures versus soldiers. Several beasts from the single-player game, including the basketball-sized phase tick, are playable, and prove to be exhilarating weapons in their own right. The multiplayer experience is a good time – and quite different than single-player (most time powers have been excised) – but it doesn’t have any depth or a progression for players to follow. At the most, it’s a fun distraction. The single-player game, however, should not be missed. 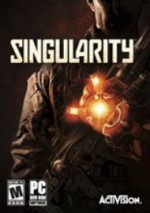 Singularity is a thrilling, provocative, yet oddly familiar journey
through the fabric of time.

Purchase More Info
8.5
i
Game Informer's Review System
Concept A heavily influenced FPS that taps familiar components to create a unique and compelling adventure
Graphics Grenade explosions are noticeably absent, but the remainder of this world is gorgeously detailed and loaded with visual variety
Sound The silent protagonist role is pulled off thanks to solid performances by the supporting cast
Playability Time manipulation is as easy to wield as a pistol and combat is executed without error, but more variety in the environmental puzzles would have been nice
Entertainment This FPS values its story and world just as much as its gunplay. The seven to eight hours of play it offers fly by
Replay Moderate