Bullet hell shooters appeal to a very specific crowd. It’s a genre that requires patience, lightning-quick reflexes, and the ability to memorize and recognize bullet patterns at a moment’s notice. With Sine Mora, Grasshopper Manufacture and Digital Reality have created a shooter that can appeal to both hardcore and casual fans of the genre.

If you’re intimidated by the sheer number of projectiles that occupy the screen during most shooters, Sine Mora’s speed up ability should help you navigate threats far more efficiently. While it’s called “speed up,” it essentially slows down everything but your plane. That seemingly impenetrable wall of dots will often reveal a safe path once the action slows and you can wrap your head around the incoming pattern.

Most of Sine Mora’s gameplay resembles other games in the genre, with power-ups, shields, and score bonuses floating around the screen. Story mode is filled with some massive, beautifully designed boss fights, and the criteria for mission failure is novel. Instead of a standard health bar, your victory or defeat is determined by a countdown timer. Each time you get hit, your timer is penalized a few seconds. On the other hand, you gain seconds every time you defeat an enemy. It adds a sense of urgency to the stages, and makes sure you’re actively engaging enemies rather than simply avoiding them. The large majority of your deaths will be caused by this countdown timer, but there is the occasional boss or environmental hazard that can destroy you with one devastating hit.

With so many games in the genre that behave similarly to each other, it's refreshing to play against the clock rather than a health meter. Instead of having that "Oh crap, I die if I get hit once more" feeling, you're faced with more dynamic situations that require you to become more aggressive (and sometimes reckless) to kill more enemies. Sine Mora may feature many trademarks of the genre, but the timer does its job in making it stand out from the pack. In a less successful attempt to stand out, Sine Mora tries to present a complex narrative. You might wonder why a shooter is rated mature, but its story involving genocide, rape, and time travel certainly gets adult at times. Oh, and it's probably worth mentioning that the characters in this "adult" story include a lizard and a legless bison who like to fly airplanes. It's a ludicrous and incoherent plot, and the fact that it's told through walls of text doesn't do it any favors.

Story mode is no cakewalk by any means, but casual shooter fans should be able to conquer it with enough practice. Arcade mode, on the other hand, is aimed squarely at hardcore fans of the genre. You choose your your craft, pilot, and difficulty level, then head out for an experience that’s so hard it requires nearly inhuman reflexes and a healthy knowledge of hitboxes. In addition, you can opt to substitute a reflective shield or the ability to roll back time in place of the standard “speed up” power.

If you’re not a shooter fan because the genre doesn’t appeal to you, Sine Mora probably won’t change your mind. If you’ve stood on the sidelines because of intimidating difficulty levels, however, it’s worth giving it a shot. You won’t coast through the experience, but it remains fair and (most importantly) fun throughout.

8
About Game Informer's review system
Concept
Incorporate a novel time-based mechanic in a bullet hell shooter
Graphics
Backgrounds and boss fights look gorgeous
Sound
Understated music stands out from the hyper soundtracks of other shooters
Playability
Challenging and fun, regardless of your experience level
Entertainment
One of the best shooters on XBLA
Replay
Moderate 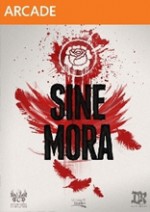