Konami’s intriguing remake is bogged down by phantasmal motion control
by Tim Turi on Dec 08, 2009 at 07:10 AM When players first visited the town of Silent Hill in 1999, they encountered a twisted, decayed nightmare crawling with monsters requiring loads of ammunition to kill. Now it’s 2009, and Konami’s remake of the survival horror gem has ditched the original’s industrial deterioration, combat, and weapons in exchange for corrupting ice, pacifism, and a flashlight. Mix in psychological profiling and Shattered Memories is a very different game, for better and worse.

As in the first game, Harry Mason is looking for his daughter Cheryl after a car wreck near Silent Hill. This is the spot where the two games fragment into different experiences. In Shattered Memories, Harry lives in the creepy town, and the entire place is buried in snow. Some familiar names return, but the characters aren’t exactly as you remember them. Dahlia is a seductive young lady with a complicated past involving Harry, and Dr. K takes on the role of the player’s psychoanalyst. The residents of Silent Hill feel real, and I couldn’t help but become emotionally invested in them. A narrative smacking of M. Night Shyamalan is a welcome departure from the ludicrous and confounding plot of the original.

Shattered Memories also features an intriguing psychological profiling element. You begin the game by filling out a surprisingly personal questionnaire that pries into everything from your virginity to your faithfulness. Harry’s disposition, characters’ appearances, routes through town, and even the monsters stalking you undergo noticeable changes based on your answers. It’s not enough to disturb you to the core of your psyche, but it definitely warrants another playthrough.

Good thing the story is so redeeming, because most of the gameplay is divided into mediocre exploration and infuriating evasion. In the effort to find his daughter, Harry trudges through the town at the speed of a 40-year-old pickup truck with flat tires attempting to ford a swamp of molasses. Clunky, tank-like movement is dictated by the nunchuk, while the Wii remote directs the flashlight’s imprecise beam, and thus Harry’s dubious trajectory.

Controlling Harry is an awkward affair that’s exacerbated by instances when you’re chased by meat monsters. Just when you thought negotiating your escape through the confusing environments couldn’t get worse, the underwhelming monsters pounce on you, initiating a frustrating and unresponsive motion-control prompt. Miming the action of throwing off enemies after being dogpiled taxes your patience, which is further amplified by Harry’s decreased speed after surviving an encounter. Instead of guns or rusty pipes, you’re reduced to using flares to temporarily stave off the creatures. These chase segments grow tired very quickly, leaving you missing weapons or any other option to dispatch your pursuers.

Harry’s fancy phone plays a big part in navigating the convoluted town, with your reliance on it rivaling that of the annoying guy who texts during movies. Mysterious calls require you to lift the Wii remote to your face like an idiot, effectively annoying anyone in the room with the noises its tinny speaker produces. In contrast, interesting new layers of interactivity involving phone number puzzles and capturing pictures of ghosts exercise your brain to satisfying results.

Shattered Memories’ frustrating control flaws and dull pacing make it a hard game to recommend. Its engaging characters, improved story, and unique profiling mechanic only make it worth checking out for diehard Silent Hill devotees willing to wade through the muck. If you’re a Silent Hill fan interested in a fresh take on the stale formula, this Wii entry may be the Cheryl you’ve been searching for – but it comes at a cost.

6.25
About Game Informer's review system
Concept
Visit Silent Hill for the first time again, this time armed with only a twisted psyche
Graphics
The worst shadow effects I’ve ever seen detract from an already rough-looking game
Sound
Great voice acting and tone-setting music are spoiled only by the horrendous grinding sounds emanating from the Wii remote
Playability
Controlling Harry with the Wii remote is sloppy, and manipulating motion-controlled puzzles can be a trying process
Entertainment
There is fun to be had here for true Silent Hill fans, but they’re going to have to endure a gauntlet of clunky gameplay
Replay
Moderate 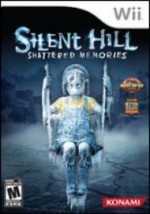