After Alex Shepard's discharge from the army, he travels home to deal with a despondent mother, a violent, unloving father, and a little brother who's mysteriously gone missing. Oh, and there's the little matter of his hometown, which some demonic force devoured, then farted into the sewers of Hell's ninth level. Welcome home, Alex. They say it's never easy.

The newest entry in Konami's legendarily disturbing horror franchise attempts a return to former glory, and in a few instances it succeeds. The game's atmosphere – which has always been a pinnacle for the series – does a formidable job and helps set the tone for some frantic moments. The whole world looks as though it's contracted some debilitating illness and begun to rot away. Plenty of cool old-style film effects help accent the game's beautiful grotesquery. The lighting effects are particularly impressive; every level is filled with strange objects that jut out in odd ways, causing your flashlight to project toothy shadows that look ready to cut you in half at any moment.

The combat has been beefed up, as well. Instead of the stilted, single-swing animation attacks found in previous games, Alex has a limited combo system. He's much faster and more nimble than past Silent Hill protagonists. Sadly, the combat system is also where Homecoming takes a misstep. The dodge, which is required to survive most encounters, often doesn't do what it's supposed to: evade an attack.

Resource management is also a problem. It seems the developers wanted to make every encounter mean something, so they ratcheted up the difficulty. This level of challenge results in you spending most of the game with depleted health and ammo. Every time you find a box of ammo with five shells inside you'll want to jump up and down on Oprah's couch.

The game is dark, and I don't mean dark in macabre, Lovecraftian terms. I kept going into the options menu to double check that the brightness hadn't been mysteriously turned down. Even though your flashlight casts some impressive shadows, it looks like it's running on the last dregs of a five-year-old battery most of the time. I've had more powerful lights on my keychain, and I wouldn't be surprised if Alex suffered some kind of irreparable eyestrain over the course of the game. The biggest problem with the darkness is that you sometimes walk right past a door or switch you need in order to progress, so you could easily end up wasting an hour humping the walls on the wrong end of an empty hell prison.

I wish I had more to praise about Homecoming, because I'd like to see this series shine again. Fans will probably dig the game's cool set pieces and the story, but the save points are placed too far apart, many puzzles require too much random experimentation, and the dialogue system seems like an afterthought. Who says you shouldn't go home? I do. 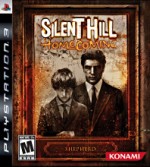 Silent Hill Homecoming
Purchase More Info
6.5
i
Game Informer's Review System
Concept Konami's soul- crushing survival horror title returns with some fresh ideas, but they fail in important ways
Graphics The game is way too dark, and we're not talking theme. You'll want to turn the brightness adjuster all the way up, but that also washes out the screen
Sound Homecoming's blend of horror sounds is spooky, but the noise is so continuous that eventually you become desensitized to the racket
Playability The new combat system is a nice idea, but there is an unnecessary amount backtracking. Why no shortcuts?
Entertainment A great game to put you in the mood for horror, but it might also leave you frustrated
Replay Moderately Low