Upon commencing our hands-on demo of Shoot Many Robots, a fair question was posed to us: Had we heard of Demiurge Studios? For most the name doesn’t ring a bell. Nonetheless, Demiurge has lent talent to the production of Mass Effect, Borderlands, Brothers in Arms, and Rock Band, amongst others. A seasoned studio of 30 or so independent developers, Demiurge has made a habit of working in the shadows of giants. Stepping into the spotlight, the developer debuted its first original IP with a teaser this past fall, and have now provided a peek at gameplay.

A humorously descriptive title clearly sets the tone for the game. Shoot Many Robots stars P. Walter Tugnut (the P stands for “Pickles”) who is an unholy union of Tallahassee from Zombieland and the Heavy from Team Fortress 2. Boasting questionable mental fortitude, Tugnut has a bit of a drinking problem, lives in an RV on the outskirts of civilization, and spends every waking moment preparing for a robot apocalypse. One day, his paranoia proves justified as a Chernobyl-style factory near his homestead begins to create robots under its own will. Stepping up to fulfill his destiny, Tugnut must work his way to the industrial heart of the invasion in order to save humanity.

Drawing inspiration from Metal Slug, Shadow Complex, and Borderlands, Shoot Many Robots aims to update the run-and-gun genre by taking advantage of analog controls and a full range of 360 degree aiming. Fodder for your firearms are found in a variety of “guns with legs,” or in some cases, “chainsaws with legs,” and “rockets with legs.” The design mantra of the mechanical enemies is easy to spot.

Building upon a belief that RPG elements make every game better, deep customization and player growth is core to play. Nuts act as currency – spewed from each robot carcass – and allow you to purchase new costumes or upgrade equipment. Tugnut’s RV is the hub for these unlocks, in addition to acting as the multiplayer lobby.

Costumes add diversity to play and infuse a bit of humor to the game. Adorned on one of three places – the head, back, or legs – most items modify Tugnut’s mobility or buff stats. Squeezing Tugnut into a pair of slick leather pants allows him to perform sliding attacks, and attaching a jetpack offers up vertical play. This sort of customization allows players to create their own character classes by combining unique wardrobe pieces. Some items will augment your weapons, such as the soldier helmet boosting the power of the machine gun, while others will increase Tugnut’s physical prowess. For example, the Tutu improves both his speed and jumping range.

The multiplayer component of Shoot Many Robots is a highly-touted competition/co-op hybrid. Featuring 2-4 player online co-op, nuts are collected in a communal manner and then divvied out according to performance. Working in tandem is encouraged, however, as a combo meter will dish out massive experience when maintained.

Co-op allows each player to put their own unique spin on Tugnut, which is in line with Tugnut’s rumored split personalities. The aforementioned wardrobe options will ensure no two Tugnuts look alike, as one could be dismembering bots in a beer hat, fairy wings, and kilt, while another parades about in a motorcycle helmet, Viking shield, and tutu. We got our hands on the title for a short period of time, and the controls were easy to grasp. Swapping between the array of unlocked costume pieces resulted in a bit of confusion, but only because each offered such drastic changes to play. The diversity will undoubtedly be appreciated when we’re a bit more familiarized with what each item has to offer.

Two weapon slots allow for a variety of tactics in the side-scrolling levels. The default weapon boasts an unlimited supply of ammo for constant carnage, and includes variations of submachine guns, shotguns, machine guns, rifles, and revolvers. The secondary weapons – dubbed “Oh S--- Guns” – feature consumable ammo and are designed for maximum damage in a tight spot or when pitted against a boss. This category includes rocket launchers, grenade launchers, Gatling guns, grenades, and Molotov cocktails.

Levels showcased during our demo include FarmTown, one of the earliest locations in the game and the farthest from the ominous factory. Here we were pitted against two types of robot foes, the standard Chopperbot and the more menacing Tankbot. Subsequent levels included a grain processing plant, a junkyard, and a boss level. Here, a massive anthropomorphic bulldozer called “FatBoy” engulfed the screen, spitting pools of oil that quickly ignited. We then had to dodge the flames while continually pelting FatBoy with projectiles.

A tech demo concluded the presentation, appropriately named “LotsaChoppers.” An empty black room was overwhelmed with wave after wave of Choppers to showcase the difficulty we can expect later on in the game. Although combat quickly devolved into chaos, watching the robots clamor over each other like ants only to be met with a well-placed missile was extremely satisfying.

Demiurge is still working on the specifics of Shoot Many Robot’s release – mulling over self-publishing or partnering up  – so no platform specifics have been announced. That being said, the game was demoed and played quite well on the Xbox 360.

Shoot Many Robots will release in an undisclosed window of 2011. Check out the most recent gameplay footage here. 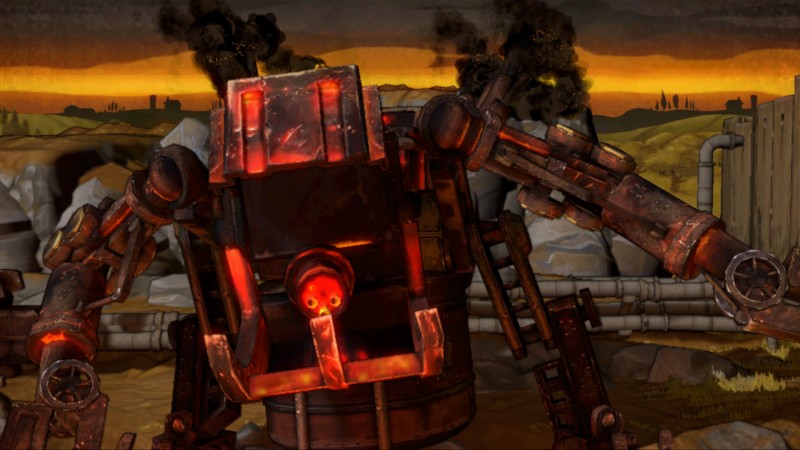 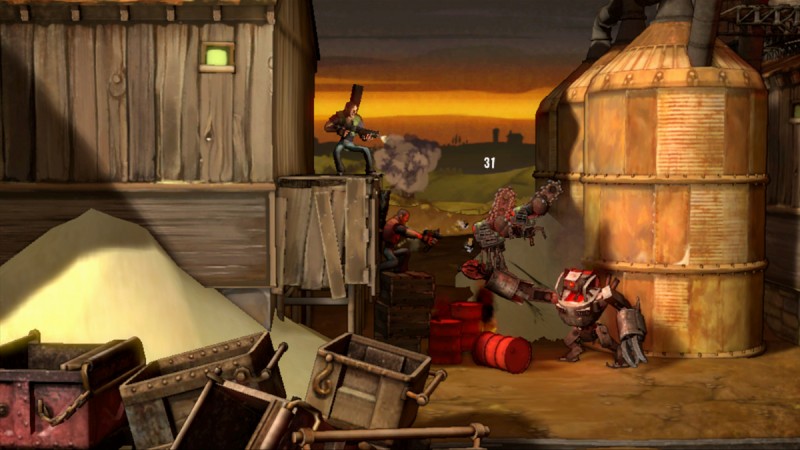 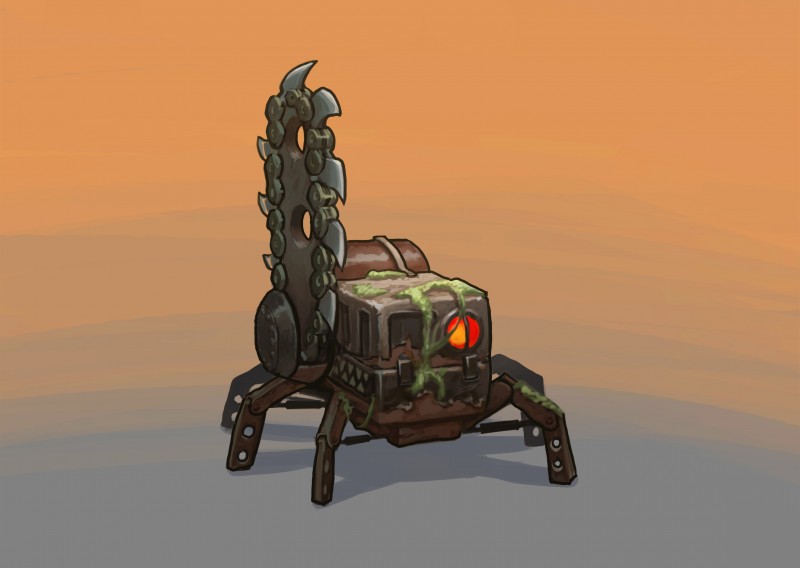 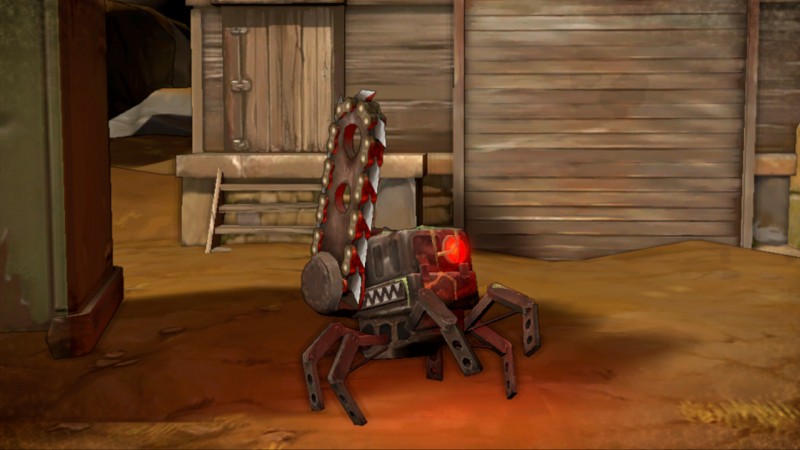 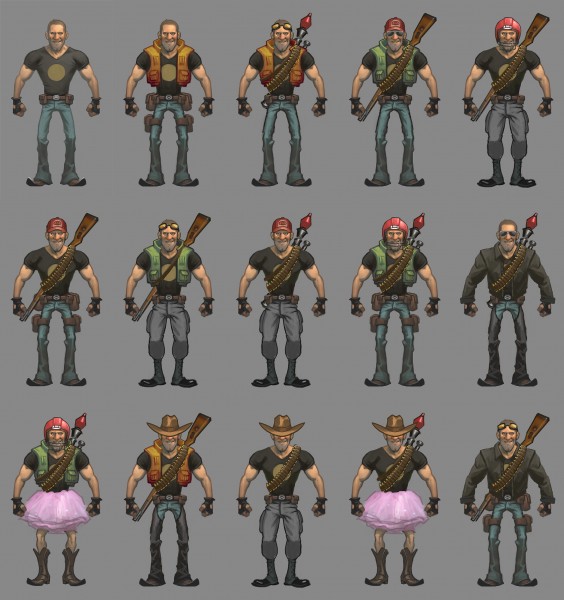