Evil is most disturbing when viewed through pure eyes, and Persona 4 delves into the subject with haunting effectiveness. The game's morbid story juxtaposes the innocent lives of high school students with brutal crimes and hidden shame, filling the plot with discordant and compelling moments. Supposed best friends bury resentment for each other, outwardly happy kids wrestle with intense fears of rejection, and ordinary people become the centerpieces of gruesome crime scenes. This isn't an RPG for anyone who is content to marry a princess or save some ­crystals.

The stylish narrative gets more irresistible as it goes on, but it doesn't come without a hefty investment. Unlike the last entry in the series, Persona 4 takes three or four hours to get going, leaving you with little to do but read text until then. However, when the gameplay finally opens up, it all pays off. With the creepy premise and cool characters firmly established, you're free to explore the rural town of Inaba and discover how the game elements fold into one another.

Your days are filled with a school simulation where you make friends and build social links, which indirectly increases your combat prowess through your persona (a powerful creature born from a character's psyche). When school is done, you work through randomly generated dungeons using standard turn-based mechanics, though your foes often require intricate strategies to defeat (including lots of buffs and debuffs).  Upon victory, you're sometimes awarded a new persona, which you can fuse with others to form an even more awesome entity. Each aspect, from simulation to combat, feeds into the next so well that I found myself absorbed in no time.

The interplay of the simulation and combat elements form an addictive cycle that makes it easy to immerse yourself in the surreal world of Persona 4, but it isn't for everyone. The game implements a deliberate and regimented structure, requiring a lot of planning, repetition, and level grinding. On the other hand, it rewards your effort with a compelling story, rock solid combat, and a fanaticism-inspiring persona fusion system. If you've got the time and dedication, Persona 4 will not disappoint.

8
About Game Informer's review system
Concept
Take Persona 3, tweak some mechanics, add a chilling new story, and you've got another sequel
Graphics
Stylish visuals can't completely mask the fact that you're playing on outdated hardware
Sound
Despite a lot of repetition, the musical score is evocative. The voice acting is also exceptional for most characters
Playability
The mechanics are improved over the last entry, but the rigid structure and timeline still feel restrictive
Entertainment
You'll need a lot of determination to see the best that Persona 4 has to offer. The story and gameplay are engaging, but the pacing can be pretty rough
Replay
Moderate 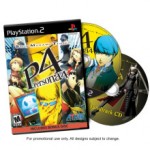