Sherlock Holmes often finds the proverbial smoking gun linked to a murder. In almost every case he takes on, he uncovers damning evidence that puts a killer behind bars. His proficiencies are all over the map, turning him into a super-sleuthing chameleon capable of becoming a shrewd interrogator, skilled scientist, master of disguise, untouchable combatant, undetectable thief, and any fantastical profession that leads to a miraculous case-breaking revelation.

In Crimes and Punishment, all of Holmes’ aforementioned skills are effectively tapped to create dynamic gameplay sequences that gel with the investigations, and empower the player with the sensation of doing impressive exploratory work worthy of the Great Detective’s name. Holmes solves six different murders – all offering interesting setups, outcomes, and plenty of sights for Anglophiles to soak up.

At every crime scene, the player must be astute and thorough, taking the time to uncover as many clues as possible to create different leads for Holmes to dive deeper into. If evidence is overlooked, entire plot threads are left in the shadows, leaving Holmes with a smaller selection of suspects and motives to work with. Sloppy detective work can lead to innocent people taking the fall for murder. A high level of player choice is brilliantly woven into each case, offering a variety of outcomes and moral choices, depending on how the cards are played. Unlike most games that deliver branching paths of this ilk, Crimes and Punishments doesn’t provide feedback for mistakes or successes. If clues are missed, it’s entirely possible to send an innocent person to jail, or worse yet, to the executioner.

While I appreciate a game that pushes me to think like Holmes and be as complete as him, a little feedback would have been nice to understand where I went wrong and right. The game does a fantastic job of outlining possible leads and pulling the player along them, but lets the player free fall into the unknown in the final moments. Is it satisfying sending someone to jail? Absolutely. I just wish I knew if I wore the deerstalker correctly.

The Sherlock Holmes that Sir Arthur Conan Doyle brought to life in his novels would obviously never make these mistakes. While Holmes shows off a high level of intelligence in gameplay related to studying crime scenes, chemistry, research, and interrogations, his deductive reasoning – the element that makes or breaks cases – is dictated by the player.

This element of the game delivers a true sense of ownership over the investigation and its results, despite being one of the weirdest user interfaces I’ve seen in a game. To force Holmes’ thoughts in a specific direction, the player must enter his brain and activate the synapses contained in the grey matter. Each synapse shows Holmes’ thoughts tied to a particular clue, lead, or suspicion. Some of these synapses deliver two different beliefs. When one of these choices is selected, the synapse may link up with another to create a new lead. When the majority of the synapses join together the case is close to solved. This mechanic is beautifully designed and is easy to use. In a matter of seconds, you can alter the synapses to make Holmes think another suspect is guilty of the crime. The choices that the player makes carry significant weight, not just in the thought that someone innocent could go to jail, but in that large chunks of an investigation can be missed if a case is sloppily handled and closed early.

I enjoyed each case, but they all end up feeling like filler episodes from a television TV series. None of these cases are linked in narrative, and there’s little to no character development to latch onto. The takeaway is more of an intimate look at Holmes’ abilities than a story driven hunt through London’s darkened alleys.

Even after a case is closed, Holmes morality is often tested, asking what kind of punishment should be dolled out to the murderer. In one case, I didn’t think the murderer should go to jail. I lied to the police about the evidence I found. In another instance, I was forced to move quickly (or not) to stop someone from committing suicide after learning they were caught. I often would sit and think about these choices. Should you not like how the events play out, the game presents an option to go back and try again from the moment the choice is made.

Holmes is controllable from first- or third-person perspectives, both working well for the act of carefully scouring environments for clues. Most of the gameplay outside of exploration is tied to minigames that are designed around particular clues or moments in the story. Lock picking is revisited the most, and proves to be challenging, but not to the degree of it being frustrating. Holmes’ chemistry set also gets a good workout, but in different ways each time. There’s little overlap in the gameplay sequences, and most of them are fun and true to the investigation. I particularly enjoyed helping Holmes put together a timeline that outlined how a crime was committed. A great sequence also pushes Holmes to booby trap a home (like Kevin in Home Alone) to stop burglars from taking its riches. All of the minigames have a “skip” function should one sequence become too much of a bear to solve.

I spent a fair amount of time in each case, and thoroughly picked the crime scenes clean, yet I didn’t earn the trophy for solving each case correctly. I clearly jailed an innocent and let a murderer run free. Regardless, I enjoyed my time sniffing out clues and having those startling “Eurkea!” moments when a revelation is made. I clearly wasn’t as smart as Sherlock Holmes, but the game sure made me feel like him – something I haven’t been able to say about the other games bearing his name.

8
About Game Informer's review system
Concept
Sherlock Holmes’ talents are on display in six standalone cases. The twist: All of his deductive reasoning is handled by the player
Graphics
The character models are detailed, but are awkwardly animated and lip synched. London is gorgeously brought to life, but the city’s hallmark sights are not featured
Sound
Sherlock Holmes’ voice rarely wavers from self-assured smugness, which can be annoying. Most of the voice work is decent, but the writing rarely calls for more than standard conversations
Playability
A nice mix of exploration and mini-games that fit the story and its events
Entertainment
A great example of how player choice can shape a gameplay experience. Most cases offer a variety of conclusions
Replay
Moderately Low 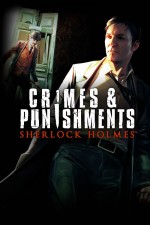