Shaun’s Idiot Friends Try To Stay Up On The Wii Balance Board
by Ben Reeves on Nov 16, 2009 at 09:42 AM
Publisher: Ubisoft
Developer: Ubisoft Montreal
Release: November 8, 2009
Rating: Everyone
Reviewed on: Wii The sequel to last year’s Road Trip struggles off the bunny hill and into the competition. The game starts with Shaun tagging along as a few of his schlubby friends drive to the airport, ready to embark on a multi-tiered global competition. However, the second his friends reach their gate, Shaun sprints off to polish his medals and make Red Bull ads. You play as Shaun late in the game, but most of the time you’re riding without him. It’s unfortunate, because his friends – and the game in general – could have benefited from some professional expertise.

Up to three friends can join in at any time and co-op progress transfers over to your single-player game, but you might not feel like progressing through this skin-deep snowboarding sim. Shaun’s trick set was pretty thin last year, and Ubisoft hasn’t done much to teach him anything new. The shallow gameplay suffers because trick recovery and railgrinding are still too forgiving.

Ubisoft mixes up the action with a variety of half-pipe challenges, timed scoring challenges, and pure speed races. The new streamlined courses seem more conscious of the fact that you are using a motion controller, letting you concentrate on stringing tricks together rather than having to focus on preventing your player from plowing straight into the course fence.

One new feature is World Stage’s create-a-trick mode. If you have a Wii MotionPlus you can design your own moves by having your boarders replicate the motions you make with the Wii remote. It’s a nice concept but it’s hard to translate your trick ideas into the real thing. The other Wii peripheral World Stage uses is the Wii Balance board, but you should just stick to using the standard remote. You might as well ride a peanut-butter covered skateboard down an elephant’s back for how impractical and testy Shaun’s controls become on the balance board.

Shaun may have walked away with the gold, but his games still can’t qualify. 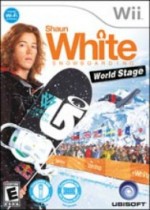 The sequel to last year’s Road Trip struggles off the bunny hill and
into the competition. The game starts with Shaun tagging along as a few
of his schlubby friends

Purchase More Info
6
i
Game Informer's Review System
Concept Shaun White and his hipster boarder friends hit the slopes again, but this time they’re not just chasing powder – there is some actual competition involved
Graphics Shaun’s hair deserves some better rendering software, and it’s pretty obvious that Ubisoft is hiding the Wii’s mediocre graphics with a speedy blur effect
Sound Keep your iPod playlist on repeat; there is almost nothing worth listening to on this disc
Playability Using the balance board is an interesting novelty, but if you want to actually win a few events use a standard Wii controller
Entertainment While World Stage is more fun than cracking your head against a tree, I’ve still had more thrills riding ski lifts
Replay Moderately Low