No need to bail on this skater
by Matthew Kato on Oct 26, 2010 at 10:13 AM
Publisher: Ubisoft
Developer: Ubisoft Montreal
Release: Fall
Rating: Teen
Also on: PlayStation 3, Xbox 360, Wii Skateboarding is all about taking chances. Considering that most people almost break their necks when they just step on a board, you have to appreciate the risks that skaters take doing the most routine actions. Shaun White had every opportunity to fall on its face; whether you compare it to EA’s Skate, the lackluster Shaun White Snowboarding franchise, or even the challenge of starting up a world full of player-crafted rails, but I’m glad that Ubisoft took a chance on this game.

I had fun with Shaun White, and that’s because the trick system works pretty well. I was surprised at the variety of tricks it pulls off with controls that are easier than Skate’s, but still require skill. It’s not as combo intensive or inventive as Skate, but Shaun White does deliver a payoff. Transforming the Ministry’s drab world with your tricks is one way to do it, but this change in the environment also occurs on another level. Sometimes I was having a hard time getting gold medals for a challenge, but by terra-forming the environment and creating a better skating line, I was able to post a better score. While it may seem cheap that you have to buy new tricks, I was spurred by the need to earn XP and liked reaping the reward. 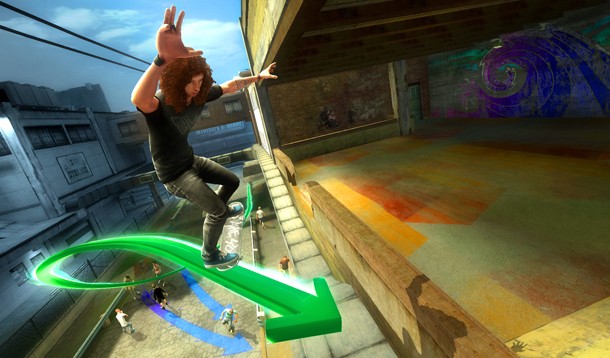 Although you take down the Ministry’s gray world, that doesn’t mean that the game is full of life. The lack of an open world is conspicuous, but what struck me more is how easily I tired of the game’s challenges. While not bad, they’re the standard fare of fetch quests and score challenges. I similarly wasn’t inspired by much of the non-story based quests. Even though you’re able to shape rails and gain access to new places, I don’t feel like the game takes enough advantage of the cool world that’s been created. The online options are customary, with the Shaping Battle mode the lone standout. Here you do tricks to fill up your Flow Meter, and whoever does that first gets to shape the world however they want for 30 seconds.

In skating terms, this game’s success is more than just dropping in on a vert ramp for the first time without eating it face-first. Shaun White Skateboarding has some tricks in its back pocket, and I look forward to it expanding its arsenal in the future. 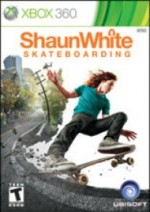 took a chance on this game.

Purchase More Info
7.75
i
Game Informer's Review System
Concept Free the citizens of the city with your skating
Graphics Seeing the environments come to life with color is cool, but overall the graphics are average
Sound Even though the script can be suspect, the various voice actors certainly give it their all
Playability The HUD can be a little busy and the trick system occasional falters, but SWS is a solid experience
Entertainment Shaun White’s world is like a big playground to unleash skate moves on, but it runs out of steam
Replay Moderate