Shadows of the Damned is not shy about its inspirations. Early in the game protagonist Garcia Hotspur proclaims that he and his traveling skull companion Johnson are making “our very own road movie.” Like the grindhouse films that it pays homage to, Shadows of the Damned is vulgar, violent, over-the-top, and way more fun than it should be. This is Resident Evil 4 rewritten by a 12-year-old obsessed with d--- jokes. As it turns out, that’s a good thing.

In the opening moments of Shadows of the Damned, Garcia’s apartment is invaded by demonic forces that drag away his girlfriend, Paula. The tattoo-covered hero swears vengeance and jumps through a portal to Hell. Garcia’s journey takes him through multiple colorful regions of the underworld, from a Mexican marketplace to a racy red light district.

Throughout the eight-hour adventure, Garcia and his buddy trade boneheaded one-liners that would have had me groaning if they weren’t presented with such straight-faced glee. Despite being the hero, Garcia is a dimwit who chuckles at his own horrible jokes and stumbles into enemy traps constantly. Plenty of games with dumb writing use self-awareness as an excuse, but Shadows of the Damned isn’t just aware of its stupidity, it embraces immaturity with an abandon that I can’t help but respect. It doesn’t seem like Grasshopper considered any situation too outrageous or any line of dialogue too goofy to include.

Grasshopper Manufacture scored a major victory by getting help from Resident Evil mastermind Shinji Mikami. Unlike previous Suda51-developed games, polished, rarely frustrating gameplay backs up the off-the-wall insanity. Mikami’s classic, over-the-shoulder third-person shooter style is present, but now you can move at the same time. Whether you’re fighting a giant Frankenstein creature with a huge spotlight on its head or a tiny demon wearing spike-covered armor that rolls toward you as a ball, Garcia has enough grace and speed to survive any situation.

Despite his bravado, this demon hunter doesn’t spend all his time shooting up the legions of Hell. Each level contains a handful of interesting puzzles, most of which involve manipulating light and dark. If a room is enveloped in shadow, Garcia’s health will slowly drain until he leaves that region or fills the room with light by shooting a goat head. Other brain-teasers involve moving platforms around a room to form paths and hunting down keys in the form of brains that you feed to demon babies. It only takes a couple of minutes to solve these problems, but enough of them are spread throughout the game to provide a change of pace when you tire of shooting.

Both the puzzles and the combat are aided by an ever-growing arsenal of new weapons and tools. For example, halfway through the game, Garcia receives the ability to place light mines with his pistol. In combat, he can stick mines on an enemy and then shoot them for an explosion that damages both the unlucky demon and any surrounding baddies. In exploration, the mines can be detonated on certain walls and rocks to discover hidden areas. Each upgrade provides similarly inventive new approaches to combat and tactics for dealing with the oversized boss encounters.

The only major flaws in Shadows of the Damned come in a few frustrating late-game scenarios where you’re put in arena fights against an absurd number of opponents, and a handful of chase sequences where Garcia is instantly killed if caught by a pursuer. I was also saddened to discover that there’s no new game-plus option. Given the huge number of upgrades, I wanted to restart the game as a powered-up bada*s on a higher difficulty.

Shadows of the Damned is unapologetically adolescent, but instead of trying to be cutely ironic and wink at players, the humor comes off as genuine, playful, and fun. Even if you don’t find the idea of a sniper rifle called “the Big Boner” funny, you should still enjoy the solidly designed shooting and bit of thought required to play the game. Grasshopper has finally come into its own, and I hope it carries this momentum (and Mikami) forward to whatever project is next. 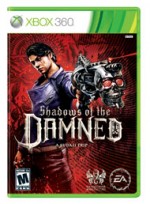 This is Resident Evil 4 rewritten by a 12-year-old obsessed with d--- jokes. As it turns out, that’s a good thing.

Purchase More Info
9.25
i
Game Informer's Review System
Concept Suda51's wackiness mixed together with Shinji Mikami’s expertly designed monster shooting
Graphics One of the more colorful Unreal Engine 3 games
Sound Silent Hill sound designer Akira Yamaoka crafted an incredibly weird, but endlessly interesting soundtrack that's aided by playful voice acting
Playability Suda51’s most approachable game, with a control scheme that fans of third-person shooters should get used to immediately
Entertainment As long as you can get behind the juvenile sense of humor, Shadows of the Damned is a road trip to Hell well worth taking
Replay Moderately Low