When the original Section 8 released, the $60 title featured decent multiplayer but no significant single-player mode. With Section 8: Prejudice, TimeGate offers more content at a significantly reduced price. It’s a bold move that should appeal to those who felt burned by the original’s limited amount of content.

Three modes share the stage in Prejudice: Campaign, Swarm, and Conquest. The campaign eats up about five or six hours with passable-yet-uninspired genre fare. While the original game’s single-player mode was essentially a tutorial, this sequel features a full (albeit brief) story complete with generic cutscenes and objectives. It doesn't turn the FPS world on its ear, but attempting to create an actual campaign mode is a step in the right direction.

Swarm mode should be familiar to fans of Horde, Firefight, or any other “us against them” wave-based modes. Just like in those, you assemble a team of up to four soldiers to defend an area against enemies of ever-increasing numbers and difficulty. While the concept is nothing new, the ability to spend currency on turrets and other defensive structures adds an element of strategy not typically seen in similar modes.

Conquest serves as the real meat of the game. You start by selecting your spawn point, which triggers a sequence involving your character being blasted to the ground from space. If you’re accurate enough, you can even land directly on an opponent, killing them instantly. Once your boots are on the soil, a Battlefield-esque war for control points breaks out. In addition to capturing areas, you also earn points that can be spent on the same turrets and structures available in Swarm. These RTS-lite elements aren't exactly Starcraft, but it's nice to call in some backup from the sky when things get too heated.

Dominating the battlefield by securing control points is fun, but it’s the Dynamic Combat Missions (DCM) that spice up these rounds. In the middle of battle, objectives pop up that require you to assassinate/protect VIPs, collect/defend various items, destroy/protect convoys, and more. You might be storming a control point one moment, only to switch to an assassination mission on the fly. Carry out the DCM, and your team will receive a large point reward. It’s a simple yet engaging feature that makes Conquest the best mode.

Little touches like the DCMs and base-building elements help keep the action fresh, and the frenetic Conquest mode offers plenty of replay value. For a budget title, Section 8: Prejudice offers a lot of content. It doesn't rank alongside the Call of Dutys and Battlefields of the world, but it's worth a look for FPS fans itching for a new experience. 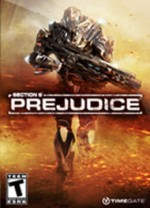 Section 8 Prejudice doesn't rank alongside the Call of Dutys and Battlefields of the
world, but it's worth a look for FPS fans itching for a new experience.

Purchase More Info
8
i
Game Informer's Review System
Concept Cram a full first-person shooter into a budget download
Graphics Character models and arenas are generic genre fare
Sound See above. You won't hear anything captivating here
Playability The Battlefield-esque Conquest mode is solid, with dynamic missions and base-building elements keeping the action fresh
Entertainment It won’t revolutionize the genre, but it offers a lot for FPS fans on a budget
Replay Moderately High