Nobody wants to eat caviar every meal; sometimes a plain old hamburger will do. When you have a hamburger that reappears after you eat it and never goes bad, though, why would you ever buy a new one? That’s the problem with bland video games in overpopulated genres. Section 8 only minimally distinguishes itself from many space marine FPS titles already available.

The differences between Section 8 and the games it apes are mostly superficial. Like the Unreal Tournaments of the world, it’s best if we pretend that Section 8’s terrible single-player component doesn’t exist. Online, two 16-player teams race to collect 1,000 points by controlling objectives and killing enemies, just like in any number of other titles. Here, though, players plod at a snail’s pace as they chip away at each others’ massive health pools. By engaging their powerful jetpacks, players can jump in and out of trouble – which has the side effect of making matches between experienced combatants a matter of wearing down their jetpack charge as much as their armor.

The one cool innovation in Section 8 is its randomized missions. As an example, an objective like a convoy will occasionally spawn. One team gets tasked with protecting it, the other with destroying it. Whichever side wins this skirmish gets a healthy point boost, and often an in-game bonus like a new outpost or a super-powered tank. These one-off side missions are a great addition, throwing much-needed wrenches into Section 8’s well-worn gameplay.

Ultimately, these missions are not enough to give this title the boost it needs to make a name for itself in a crowded genre. The nice backend clan support is wasted since the game just isn’t much fun to play. The shooting lacks the high-intensity lethality of Counter-Strike, the lightning-paced speed of Tribes, and the great cooperative mechanics of Battlefield. You won’t spit this hamburger out, but you probably won’t tell your friends about it, either. 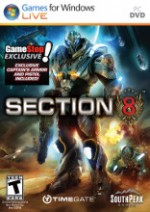 Section 8
6.5
i
Game Informer's Review System
Concept Mix Tribes and Battlefield in an online shooter with slow movement speeds, impressive jetpacks, and massively inflated health pools
Graphics You’d have to really try to come up with a more generic space marine look
Sound The soothing female announcer could be pulled from any sci-fi show or game
Playability Hooray for customizable controls! Get used to jumping around more than you have since Quake 3
Entertainment Sure, if you absolutely must have another team-based multiplayer sci-fi shooter, this is certainly that
Replay Moderate