The Saw films are renowned for their ability to induce gut-wrenching reactions with vivid torture scenes and nail-biting suspense. Imagine my dismay when I popped in the game and instead felt boredom tempered with frustration. Developer Zombie has successfully transfused the grim atmosphere and aesthetic of the movies, but gallons of blood were lost during the procedure.

Saw’s ridiculous story is wedged firmly between the first and second films. After detective David Tapp suffers a gunshot wound at the hands of Jigsaw’s crony, he’s transported to the serial killer’s altered asylum, patched up, and tasked with enduring a gore-filled, puzzle-infested test. From the very start, Saw’s plot is hog-tied and thrown in a trunk while gameplay takes the wheel.

Traversing the dark, booby-trapped rooms of the enormous asylum very unnerving. If you aren’t careful to disarm shotgun traps and avoid trotting barefoot over broken glass, your time in the loony bin will be brief. It’s startling the first few times an expertly placed shotgun blasts your head into a cloud of pink mist, but later in the game your inevitable missteps will test your patience.

Being the accommodating host he is, Jigsaw has populated the sanitarium with other victims. Most of these desperate souls are after the key that has been surgically implanted in your chest, rushing you with impromptu weapons like nail-bats in their fight for freedom. I dropped the slow melee weapons mere hours into the game, as the enemy AI is so weak that your foes cannot react properly to the good detective’s mean right jabs. Saw’s combat is a mess. Aiming a gun with the left trigger and firing by pressing a face button? That’s torture.

The few asylum captives that aren’t trying to kill you are your responsibility to rescue. This usually involves powering-down torture machines by arranging cog wheels, rewiring circuit boxes, and aligning gas pipes. Self-contained, the puzzles are simple and rewarding. The game attempts to enhance their difficulty by filling rooms with time bombs or poisonous gas, which only leads to frustrating checkpoint reloads.

In the end, Saw fails to deliver the suspenseful crescendos, surprising twists, and apprehensive atmosphere of the films. Instead, it’s padded with unremarkable gore, poor pacing, and uninspired level design. This game suffers from the same chronic affliction as the milked film franchise – it wears out its welcome quickly and asks too much for the price of admission.

6
About Game Informer's review system
Concept
Solve repetitive puzzles and fight brainless foes in a Saw-flavored setting
Graphics
Slow loading textures, awkward animations, and generic character models mar a decent setting
Sound
Hats off to Tobin Bell’s Jigsaw voicework. He really knows how to tickle your spinal cord
Playability
The combat is clueless, the traps get annoying, and the experience drags on. At least the puzzles are fun
Entertainment
True fans of the movies may find something worthwhile here, but survival horror fans hungry for their next big scare should look elsewhere
Replay
Low 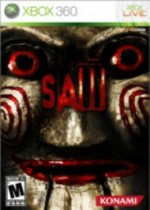