During the long wait for GTA IV, Saints Row was a perfect stopover for many of us. Outside of an entertaining activities system, it didn't really bring anything new to the table - and that was fine. I was just happy to have high-resolution textures and a targeting system that wasn't actively annoying. Its sequel might find the current climate a little more challenging - there have been a lot of great, games released since 2006. Still, it's clear that developer Volition hasn't rested on its laurels; Saints Row 2 is more ambitious and in many ways a better game than its predecessor.

The basics are the same: You start out creating a custom character and then begin wrecking shop in the fictional berg of Stilwater. The character creator is even more robust than last time; you can even choose your voice and walking animation (pro tip: fat dude + swishy female walking animation = major laughs). As before, there are a ton of clothes and other options availabl, and now you can actually customize the look of your gang and the cars they drive.

From there, you can engage in whatever types of mayhem you wish. The activities are back, and include some hilarious new tasks like streaking and tapings of the COPS-style show Fuzz, where you abuse hapless pedestrians dressed as a policeman for big ratings. If this all sounds a bit juvenile, believe me, it is. Within my first hour, I had earned some cred on the streets by spewing liquid poo all over a suburban housing development with a waste truck. Occasionally, the frat boy humor crosses over into cheap nastiness; broad stereotypes are, as always, plentiful.

However, there is evidence of growth in the main story missions. There are fewer generic "pizza delivery" missions this time around and more complex, interior-based raids and shootouts. Volition has also included a good variety of set pieces - from a samurai sword fight to a helicopter attack on a drug facility, creating a more cinematic flair and pacing to the action this time around. While it's still essentially a series of missions, each gang's storyline has a unique feel, and acquiring and defending property and hoods adds to the sense that you're building a criminal empire. It's not the most polished game in the world (the car handling could really use an overhaul), but it succeeds in being a consequence-free playground for your id to run free. Put it this way: If GTA IV aspires to the high drama of crime epics like Carlito's Way, Saints Row emulates the goofball antics of '80s cop flicks like Dragnet and 48 Hours. Also, it must be said; due in large part to its breezy pace and mid-level checkpoints, sometimes it feels like a bit less of a chore than GTA does.

While - both graphically and in gameplay - Saints Row feels behind the standards set by GTA IV, it has an ace up its sleeve in the online arena: true online co-op. And it works. Going through the main story mode with a friend is a hoot, plain and simple, even if you might find yourselves getting off track in search of that elusive five-star wanted level. Is it genius? Probably not, but it's a feature that will go far in further establishing Saints Row identity amongst gamers. While it might not be as important as some of this year's big games, Saints Row 2 is a profanely good time. 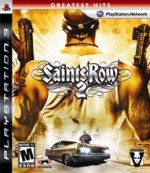 During the long wait for GTA IV, Saints Row was a perfect stopover for many of us.

8.75
i
Game Informer's Review System
Concept Take the GTA template in a completely gonzo (and often ridiculously entertaining) direction
Graphics The first Saints Row benefited from being the first next-gen sandbox-style game. This time around, it suffers in comparison to the gorgeous GTA IV
Sound A very solid soundtrack balancing well-and little-known tracks in a variety of genres. The voiceovers won't win any Oscars, but they are fine in context
Playability It's a bit rough around the edges, especially online, but you can drive and shoot things just fine
Entertainment In its own silly, b-movie way, it's a damn fun game
Replay High