Rygar: The Battle of Argus The Wii seems to be the system of choice if you want to play older games. It has a wealth of downloadable classics on Virtual Console, you can play the entire library of GameCube titles, and now it's even getting ports of PS2 games, like this 2002 Greco-Roman action title. Unlike the Nintendo classics, however, this mythological adventure doesn't hold up under the destructive weight of time.

A lot has happened since Rygar appeared on PS2. The action/adventure genre has evolved to some epic cinematic heights, and all Rygar has done is grow out his spiky hair and gotten a few tattoos. Where it counts, he's still the same simplistic button jockey. Even when it first came out, Rygar was only on the high end of average. Rygar's slightly destructible environments were fun, but not original. Its combat was solid, but fairly basic. In this post-God of War world, Rygar's average qualities trudge ever closer to being outright failures in game design.

Even after jumping to the Wii, Rygar's combat feels sluggish, hindered by the terrible auto-targeting. By the time you're well into a combo string, your opponent has often moved out of the way and started stabbing you in the back. Even Rygar's signature weapon, the Diskarmor, no longer seems original. While Rygar has great attack range, the combat lacks any flash or style.

Rygar's mediocre storyline doesn't help, either. It hardly seems epic enough to have come from the same bloodline as the ancient myths it apes. The level layouts deserve a revamp, too, as it's not always clear where you should be going next. The fixed camera hinders the action, and doesn't help the already iffy platforming. While we're talking about dated features, we should mention the game doesn't even support widescreen, instead opting to stretch out its 4:3 image to fit 16:9 displays.

The ­character--like the game's subtitle--has changed, but neither are for the better. In fact, there is no reason to choose this game over the now cheaper PS2 version. Sure, the game features a few new enemies and a new gladiator mode that has you racking up a high score in area challenges using the Wii's motion controls, but both are easy to miss if you aren't paying attention. You might have some fond memories of this series, but I suggest you avoid eye contact with this game next time you're at the store. 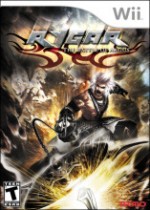 Rygar: The Battle of Argus

A lot has happened since Rygar appeared on PS2.

Purchase More Info
5.5
i
Game Informer's Review System
Concept Port an old PS2 action adventure title based off Greek myths over to the Wii with limited extras
Graphics Need proof that Wii games don't look any better than last generation games? Look no further
Sound The musical score is fairly decent, but the voice acting could use some work and a better script
Playability The game plays like a six-year-old title, and Tecmo did little to polish its dated mechanics
Entertainment The game isn't devoid of fun, but Wii ?owners can do better than this
Replay Low